Pope Francis' Culture of Encounter with the NBA

Pope Francis' Twitter handle— @Pontifex—is Latin for "bridge builder." As evidenced in a recent meeting with five NBA players, the Holy Father continues to exemplify what this name implies. Professional basketball captures the attention of millions of Americans—young and old, religious, spiritual and nowhere in between! His invitation is but another example of the “culture of encounter,” which I find to be a great model for spiritual leadership. That being said, I also wish the audience included five WNBA players. Here's more. 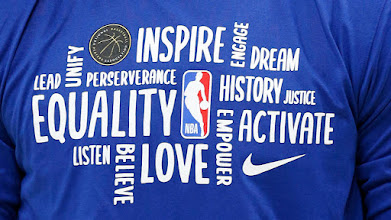 According to The New York Times, "In June, Pope Francis said he had watched the social unrest enveloping the United States with 'great concern.' In his October encyclical, titled “Brothers All,” a reflection on fraternity and social friendship, the pope wrote that “a readiness to discard others finds expression in vicious attitudes that we thought long past, such as racism, which retreats underground only to keep re-emerging. Instances of racism continue to shame us, for they show that our supposed social progress is not as real or definitive as we think.” And in November, he extended an invitation to the NBA players' union to learn more about their efforts toward addressing social justice and economic inequality. Pope Francis spoke to the power of sport both on and off the court. They met for a half hour in Rome on the Monday of Thanksgiving week—November 22, 2020.

Pope Francis has preached, taught and written about the “culture of encounter” time and again. In short the "culture of encounter" means that I have something good to give to another person, and the other has something good to give me. Those gifts are simple—our presence, our smile, a willingness to listen, ask questions, and affirm one's talents, efforts and ministry are but a few examples of what we can give and receive.

Listening to what they brought prompted me to consider what I might give the Holy Father. And what would I receive? I have thought about a message I might like to share with the pope. I can only imagine what he might want to say to me....about Sports and Spirituality, teaching theology, hosting a podcast or writing a blog. 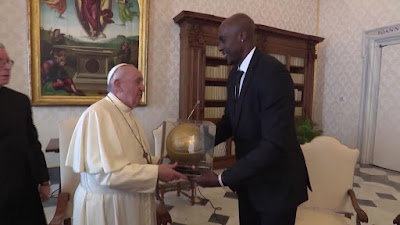 I love the word "encounter." To me, it implies invitation and openness. There is an element of surprise and wonder when this type of connection occurs. And yet, I have rarely had a meaningful encounter with another person that was totally sufficient. Quite often, I wish I had shared a certain story or asked a follow up question. I can't help but revisit something I said...or didn't say. I have often hoped that one encounter will lead to another!

As meaningful as this encounter is and was, I do wish the invitation had been extended to the WNBA as well. (I also think it's fair to wonder why he didn't wear a mask, nor did the players at an indoor event—NB: all were tested on site). I would like to know why Pope Francis and/or his staff didn't think of including these female athletes as well for they have long been doing what the NBA is lauded for doing.

In Just a Reminder: The WNBA Has Been Leading the Social-Justice Charge For Years, Maggie Ryan writes

The NBA's voice is urgently needed in this fight, but with all due respect, it's the WNBA that has been at this for a long time. As early as 2017, as President Trump was castigating NFL players for kneeling during the anthem, entire WNBA teams were taking a knee or even walking off the court while "The Star-Spangled Banner" played. The year before, three teams were fined for wearing Black Lives Matter shirts, then fought those fines until they were dropped, raising public awareness in the process.

WNBA teams have hosted town halls on race and spoke with civil rights leaders like the late Rep. John Lewis. And all of that was before this season, which the league dedicated to racial justice and the #SayHerName movement following the deaths of George Floyd and Breonna Taylor at the hands of police. Some players even opted to sit out the season altogether to further this work. And let's not forget that, according to WNBA Players' Association (WNBAPA) President Nneka Ogwumike, WNBA players stand to lose more financially, relative their NBA counterparts, by skipping these games.

The WNBA was one of, if not the first, league to show this kind of collective, meaningful action for racial justice, and these players have paved the way for the movement we're seeing today in men's pro sports. All of these voices are needed in this fight, but credit where credit is due: WNBA players have been leaders for years. As WNBA All-Star and WNBAPA Vice President Chiney Ogwumike has said, "it's in our DNA."

The WNBA is certainly a group that is building bridges. And, I'm pleased to report they aren't going unnoticed on or off the court. In fact, their post-season ratings were up by 14%. This is an impressive stat when sports fans realize the viewing of the NBA, NHL and MLB post-season games were down, significantly. 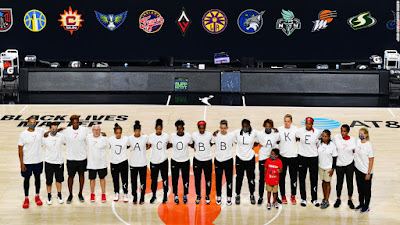 I don't want that point to overshadow the greater good that this encounter brought for the players, their fans and the Church.  For some people, it might. I have wondered if some would like the Holy Father to step down from his leadership position for not wearing a mask in an indoor setting. I do want to know—if we are to build bridges...if we are to promote a culture of encounter, how much must we "get right?" Thoughts?

My Prayer: God and gracious God. Let us continue to build bridges with one another—near and far. Help us to promote and engage in a culture of encounter. There is so much good to give...and receive.