And on the eighth day, God made George Kittle.

After a full day of rest, the Lord God must have been re-energized. To me, that's the only way to explain how an athlete with a personality and persona, the drive and discipline of George Kittle came to be. 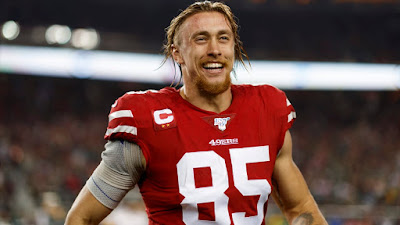 On the field, Kittle has been unstoppable. In 2018, #85 set the single-season record for receiving yards (1,377)  by a tight end. A two-time Pro Bowler and a First-team All-Pro selection, he is credited with leading the Niners' charge to Super Bowl LIV. He has struggled, like many Niners with injuries this year. Everyone is hoping that 2021 is a better year. Everyone.

Watching Kittle play is both energizing and exhausting. He blocks effectively—while turning up the speed—as a tight end should. This play against the New Orleans Saints is textbook Kittle: his refusal to go down, the yards after catch, the leaning into the fight. Stiff arm? More like an iron rod. As the challenge increases—not one, not two, but three defenders—are necessary to curb his enthusiasm. The player who resorts to pulling Kittle's face mask only reveals who he has been and still loves to be—a wrestler. In the same way I see ND quarterback Ian Book as a former lacrosse player, I dare you to watch Kittle and ignore his wrestling past. It cannot be done.

I have wondered what it would be like to be married to man like George Kittle. My guess is that his wife was born on the seventh day—the day God rested. There must be some yin to the yang.

The reason that George Kittle is Number Four on my 20 for 2020 is because of the story "I spent an entire Monday at a Santa Clara Panda Express in search of 49ers TE George Kittle." by SFGate writer, Grant Marek. This piece prompted me to laugh harder and louder than any other, all year. Thank you, Mr. Marek!! 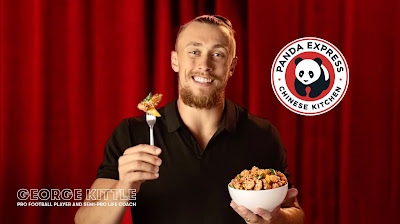 What you need to know is that Kittle's love for Panda Express (which I support) is trumped by the love his fans have for him. Marek may not have been the first 49er Faithful to have done this....he might not be the last.

In early January, I told an employee at my golf club that he looked like George Kittle. That began a friendship that prompted me to purchase a Christmas gift, I think that he too will appreciate. Although it is NOT a signed jersey from #85, it is a gift card to Panda Express. It's good at any location--especially in Santa Clara.