In recent months, it hasn't been easy to write this blog. The world of sports is __________. I'll let you fill in the blank. And yet, with just under 18 days remaining in what many people have deemed the most challenging year of their lives, I would like to conclude on a positive note. In fact, I will offer 20 for 2020. Here's to those people, places, events and episodes that brought some joy to a world desperately in need of it. 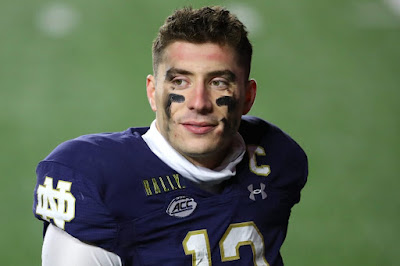 Is it the hair cut? The high socks? Every time I look at University of Notre Dame's starting quarterback Ian Book I wonder, Is he really from this era? If you heard him speak, you might think the same thing. In a recent interview with Dan Patrick he answered questions "yes, sir" or "no, sir." Ian Book is a man without a nickname. Even that seems downright impossible in today's day and age (although he did share that one coach tried to call him I-Book....I like it...I guess no one else did). Is Ian Book a throwback? No. There's more to it and then again there's not....which is just one reason, among many that he is my first profile for 2020.

If Ian Book walked into a room, he would intimidate.... no one. Standing what he claims to be a "true 6'0" you would never guess this young man from the El Dorado Hills is not only the starting QB of the #2 team in the country but the winningest of all time. Looks are often deceiving. 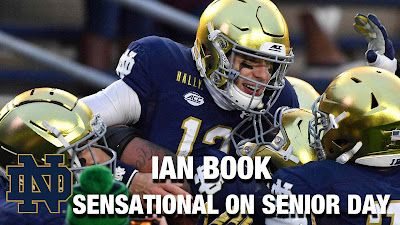 With the Irish's 45-21 win over Syracuse, Book made Irish Football history in recording his 30th win, surpassing Irish legends Brady Quinn, Ron Powlus and Tommy Clements who each had 29. Although the students were not on campus for the final home game of the 2020 season—senior day— they were for the double overtime upset over the number one team in the country, Clemson. In what is largely considered ND's greatest win since the "Game of the Century," Book completed 22 passes for 310 yards and a touchdown, with zero interceptions and 14 rushes for 67 yards AND he was awarded the game ball. I love that tradition!

I met Ian Book on the field inside of Notre Dame Stadium in the summer of 2018 at Football 101—a fundraiser organized by Paqui Kelly and the Kelly Cares Foundation. Irish faithful had high hopes for an athletically gifted quarterback—Brandon Wimbush, who was promised the starting job. I remember Wimbush had quite a presence—a positive one, a strong one. He spent a lot of time talking to fans, helping us out, posing for a whole lot of selfies and serving as a warm and welcoming face of the program.  But he wasn't the only athlete at the quarterbacks' station.  Coach Tom Reis, Ian Book and a few other offensive players were on hand and ready to help us throw the pigskin a little better—with a little more accuracy and zip. We were encouraged to throw the football into several targets and the guys had as much fun as we did when we converted the pass.

Knowing that Book, who had gotten some playing time in the 2017 season was from Northern California, I asked him if he went to Jesuit High School in Sacramento. He told me where he went and I replied by telling him that I teach and coach at St. Ignatius College Prep in San Francisco. He immediately said he was familiar with SI because he played lacrosse. I have always been able to see the lacrosse player in Book on the field. When asked by Dan Patrick, "Are you a runner or a scrambler?" Ian said "scrambler." I would say "lacrosse player."

A year later, I attended a class taught by a friend in the Mendoza College of Business on Sports Ethics. As a teacher of a Sports and Spirituality class, I am often asked about the profile of my class. Thus, I asked the professor the same question. He said "a number of athletes," but he  didn't mention any names. He  cited a few teams and concluded by adding "not enough female students." I get it. And much to my delight Ian Book walked in a five minutes early for class. The alumna in me was happy and impressed that our student athletes are in class, on time—on a Friday morning....the day before the home opener! This year, as a non-degree seeking fifth year student Book took three Irish Studies courses. He told Dan Patrick that he wanted to learn more about the culture and history of Ireland since the team was scheduled to play in Dublin in August 2020.

I would like Ian to know he has written a chapter in a different book of Irish history....and grateful for it. Best of luck in the ACC Championship game and the post-season. Thank you for the joy Notre Dame football has provided in a year like no other.