The Wide World of Sports and Spirituality: Killarney, Kerry vs Galway and Why We Should Pray

For nearly 40 years, millions of Americans tuned into ABC every Sunday night to watch the "Wide World of Sports." The sports anthology covered the stories, achievements, results and records of athletes and teams, trials and errors both near and far. Today's practicum of Sports and Spirituality has me convinced I might be able to host my own version of this program. 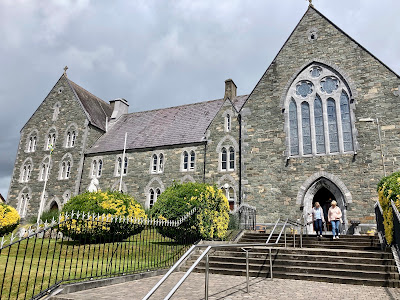 I write this on the tenth day of my 14 day golf trip. I am in Ireland with 13 other women from my golf club. Last Sunday we were in Dublin and played 18 holes of golf at Portmarnock Golf Links. Following our round, I went to Mass at St. Mary's of the Angels with two friends. I would describe this venture as Sports and Spirituality in its most traditional form.

Unfortunately, I had to sit out today's round at Waterville Golf Links due to a health issue. This was not the only surprise of the day. The way Sports and Spirituality found me was, too! 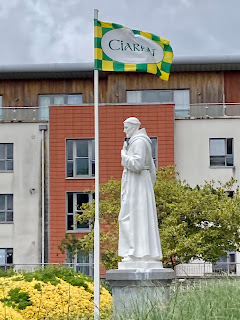 I went to mass at the Franciscan Friary in Killarney. I looked at the priest on the altar and thought to myself "this is why the Church is hurting in Ireland. No wonder fewer people are attending mass." He was quite elderly. I assumed he would be removed from the people and simply going through the motions. I am almost crying as I write and admit that judgment. In him, I found a priest who was a true celebrant of the mass. He was a teacher and a preacher. I left feeling like I was one of his athletes and he was my coach.

In light of today's Gospel reading, he spoke about the utter importance of prayer. He urged us to pray saying "when we stop praying, we forget how much we are loved. Prayer is communication with Our Father in heaven who is love and loves us." He reminded us to persevere in prayer, "for if you don't pray, you don't have the chance for God who loves you to tell you He loves you." What a remarkable reason to pray. What a valuable insight to live and learn. What an important teaching to pass on to others. Thank you, Padre.

He suggested that we begin our day by praying the Our Father. This is the prayer that Jesus taught us. Everything we need to know is in this prayer. "Make some time in the middle of your day to say it again and if you can pray the Our Father with a family member at the end of your day." He then added a recommendation for families. "Pray Grace before meals together. While your food may have come from (insert the name of the local Irish market here), ultimately God is the giver of all gifts." I appreciated his practical prayer advice. Anyone can pray those prayers. Any Christian ought to pray those prayers. Again, thank you Father!

At the conclusion of Mass, Father asked the congregation to take a seat for announcements. In Ireland, it is customary to announce the names of those who died in the past week. I picked up from the homily that this was a community in mourning as one young man died by suicide. His name was the first mentioned and was not to be forgotten. This announcement was followed by "The Requiem prayer."  As a congregation, they said

Eternal rest grant unto them, O Lord, and let perpetual light shine upon them.
May the souls of all the faithful departed, through the mercy of God, rest in peace.

He thanked the choir for their beautiful music, which prompted applause from the congregation. This applause however, was outdone by the clapping I heard following his final prayer. 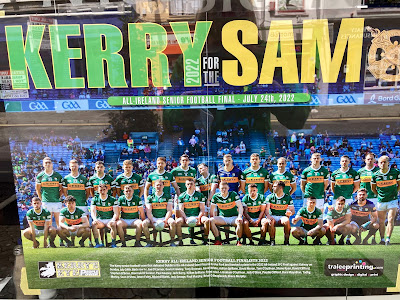 In his beautiful Irish brogue, he said "God loves us, one and all, but let us pray today for our own Kerry in the All-Ireland Senior Football Championship." His words put an enthusiastic charge into the final blessing. "The mass is ended. Let us go to love and serve the Lord and one another." It was met by clapping and a joyful "amen." I realized the feeling in my heart at that moment wasn't all that dissimilar to how I feel at a great sports event. It speaks in both sports and spirituality. Blessed be.

If I were to run a weekly show on Sports and Spirituality, I would love to profile communities of faith like the one I encountered in Killarney, Ireland. I would like for people to see their passion for a sport as unique as All-Ireland Senior Football or hurling. I want people to hear the message of an outstanding preacher and spiritual coach, like the one I met today. There's a very wide world...let the anthology begin!

And Congratulations to Kerry for defeating Galway 0- 20 to 0-16. Ideally, the S&S Wide World of Sports would explain the scoring....

Posted by Anne Stricherz at 2:14 PM No comments:

Golf in Ireland: The Benefits of Blue Space--yes, Blue

"Finding Forrester" is the story of a reclusive author, William Forrester, who lives a lonely life until he begins to mentor an unlikely suspect. Forrester, played by the late Sir Sean Connery,  advises the budding novelist, “No thinking - that comes later. You must write your first draft with your heart. You rewrite with your head. The first key to writing is... to write, not to think!” 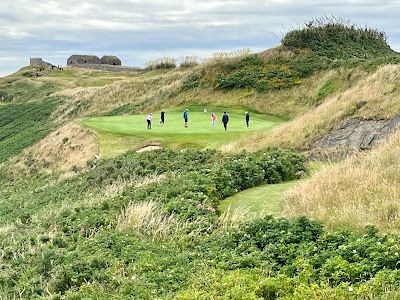 Those words have stayed with me since I saw the film. I had no idea they would come in handy the way that they have. Over the years, I have reminded myself of the "first key to writing." I have passed that advice on to countless students, especially those who admit their paper is late because writing is hard. It is! However, his sage wisdom gives a person a place to start. And truth be told, I need that, too.

I haven't blogged in nearly a month. I have contributed to this blog regularly since December 2009; thus, this pause is troubling. So like any habit that needs reset, let's ease back into it. Here's what I would like to share!

Known as a the Emerald Isle, Ireland boldly claims to host 40 shades of green. In my week here, I have seen the variants on the country's hillsides, fairways and even bogs. At times the green is piercing!  It's brilliant. It's good for you too. No doubt green is a golfer's friend, but one of the best golf experiences of my life didn't reinforce the value of it. No, golf at Old Head Golf Links revealed the grace of blue space. 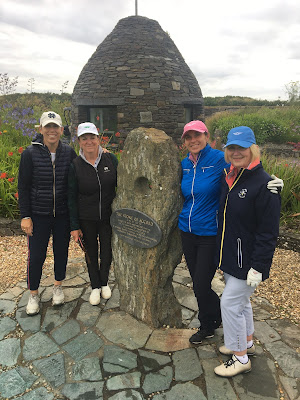 Gretchen Rubin writes “Basically the cooler cousin of green space. Aka, bodies of water (think: rivers, lakes, or oceans) that are typically accessible to everyone. Studies show that those who visit or live near blue spaces tend to be happier and more relaxed. And staring at the ocean — or even smelling the sea breeze — can actually put your brain into a meditative state. Om-mazing.”
The blue space I encountered beside, below, around and next to me at Old Head Golf Links was down right mystical. During several moments of the 4 hour and 30 minute round all I could see what blue. What a gift to behold such beauty.
Old Head offers much more than "savage views" (direct quote from my caddy, Aodhán). As written on their website

Occupying a stunning and unique headland reaching out over two miles into the Atlantic Ocean, the Old Head of Kinsale is home to the most spectacular world-class golf courses in the world. Located in County Cork on the South West Coast of Ireland, as the incredible brainchild of the late John O'Connor together with his brother Patrick, the Club has developed into one of the most recognised and sought after golf experiences anywhere on earth.

Its fourth hole is ranked by Golf Digest as number three on "the 18 undisputed, unchallenged, scientifically factual best golf holes in the world." Perhaps "proximity to blue space" ought to be considered in their criteria.

I have long taught about the value of green space. As written on Why More Green Space Is Essential for Cities

My only qualifier is that you don't have the color green without blue. I live in a city surrounded by blue and make an effort to take it in. Thank you, Ireland for offering both--in abundance.

And yes, I plan on rewatching "Finding Forrester" on the plane trip home. 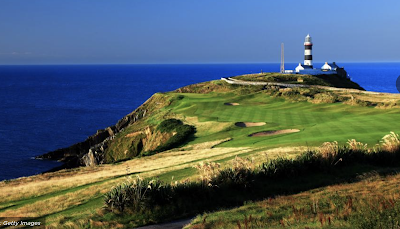