On Sunday, February 18, 2018, Gerry Lester "Bubba" Watson—one of the original Golf Boys and a two-time Masters champion secured his 10th win in the Professional Golf Association (PGA). As a longtime fan of the now second winningest lefty in the game (Phil Mickelson is #1 with 42 PGA wins), this victory illuminated five truths that resonate with Sports and Spirituality. 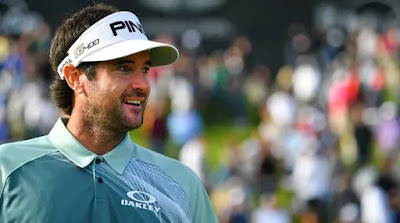 1. The importance of staying loose.
It's no secret that Watson is one of the more tightly wound golfers in the game. His nerves are visible, nearly palpable. And, his inability to control them at times has led many to deride him for his treatment of Teddy Scott, his caddy of 16+ years.

Having played on the tour for 15 years now, Watson has had to figure out ways to stay loose and manage his demons. Perhaps playing the in the NBA All-Star shoot-around on Friday, February 16 enabled him to loosen up. Watson, who played basketball in high school (and is married to a woman who played at UGA as for the  Canadian National Team) had his shot easily blocked and put up a big, bad airball in this contest!

In spite of it all, Watson has never been afraid to laugh at himself. I have a feeling this is one of the more effective ways to take the edge off of golf, a game that is both mentally and physically taxing. Whatever it takes for you to "stay loose" is worth considering! 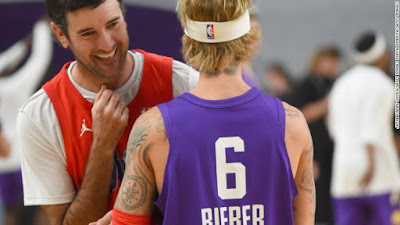 2. Never be afraid to let it all go
On the final hole, Watson's ball was "away"—meaning that he should have putt next. Instead, his opponents took their putt so that he—the winner—could have and hold that final moment. I loved this gesture.

The minute that 7-foot putt went in the hole, Watson let it all go. Waterworks. Bubba fans have seen this before, especially upon winning the 2012 Masters where he hugged his mom, a recent widow and held her tight.

Many might question his tears; "What's the big deal? Why get so choked up?" and on one hand, that's fair. On the other, however, Bubba affirms what so many golfers know is true: it's so hard to win. Golf is one of the few games where the winner has beaten everyone else in the field. For example, tennis players or football teams play only those in their bracket or league. There's no defense in golf; one doesn't play tactically against another golfer. It man or woman vs. the game. Damn, it's raw. Furthermore, those tears are a sincere reflection of who Watson truly is. He very sensitive. He's masculine and "all guy" at times—AND not but—he is in touch with his emotions and feelings. He wears his heart on his sleeve and though not everyone is a fan of that, I am.
3. The questions we ask ourselves
Through the tears, Bubba said:

"So many things, I thought about retirement. I mean there's just so much stuff going through my head right now. I can't believe I'm going to lift the trophy."

Athlete or not, I don't know a single person who can't relate to those words. We all face questions and have doubt. We say "the struggle is real" too often in jest and yet we know it IS real. I appreciate that in this moment of victory, Watson was able to share the difficult road and the questions he asked himself to get there. By no means does it compromise what he achieved. In fact, his honesty only enhances the #10. 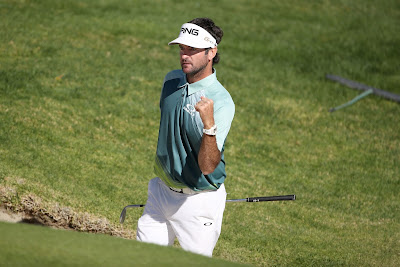 4. The power of setting and meeting a goal
Watson's first words in his post-win interview were "My goal has always been to get 10 wins, and so, this got me to my 10th win." At that moment, I realized the significance of meeting that goal, the journey it took to get there, the doubts he shared/temptation to talk away and ultimately his commitment to persevere made this win that much sweeter.

5. Gratitude and Humility
Watson has been outspoken about his Christian faith. He said, "Obviously, God's given me a gift to play golf and I'm not too good at anything else." In this moment of both humility and humor, he recognized the One who enabled him to stay "in it to win it" and concluded his remarks by thanking his wife and kids and Teddy.

His gratitude, his unconventional swing, his emotional game, his fear and doubt, his confidence and his triumphs made me hope for...another 10 more?! Congrats to my favorite Golf Boy: Bubba Watson.