As mentioned in my last blog posting, although people have raised many questions since Serena Williams announced that she is 20 weeks pregnant, I can guarantee there is one question no one has asked. Inquiring minds do not want or need to know: What shower games will friend and family hold at her upcoming baby shower? But they should, because the game I have created for an expectant coach, athlete or sports fan is far from what Parents magazine warns us about: "too many shower games are dory, embarrassing for the mom-to-be, or gross (guess the candy squished into the diaper? No thanks!)

I offered directions and encourage you to develop this activity for your audience, your generation (if/as necessary) and a given demographic. Here are the photos and profiles of the talented, competitive, inspiring and beautiful Olympians, professional athletes, champions and sporty spices.

Please note, for many years the sporting careers that women could seek on the professional level were limited to golf and tennis. The US Women's National Soccer team known as the '99ers as well as the creation of the WNBA under former commissioner David Stern shifted that paradigm.

There are many other women: athletes and coaches (Mia Hamm, Pat Summit, Chris Evert to name just a few) that you might feature in this shower game. It might also serve as an activity on women in society. Most important, honor the women who serve as inspirations with their careers, the gift of motherhood and friendship. 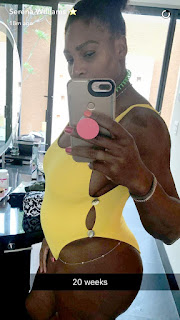 Several interesting questions have risen since Serena Williams' confirmed to her fans and the world that she is indeed pregnant. My students wondered if playing in (and winning!) the Australian Open early in her pregnancy compromised the baby's health. Serena isn't the first, and certainly not the last to give it a go; like all medical matters, consult your physician.

It is natural to inquire about her future with the game and in the game. Through her agent, she has announced that she will not play in any more tourneys in 2018, but those who know and love Serena understand how much she loves tennis and the extent of her competitive drive. Williams, is not only one of the most prominent athletes in the world she is one of the game's all time greatest. As written in the New York Times


By winning in Australia, Williams broke her tie with Steffi Graf for the most Grand Slam titles in the Open era. Williams ranks behind only Margaret Court's 24 on the career list. Court, an Australian, won the last three of those titles in 1973 after giving birth to a son, Danny, in 1972.

Will she win another Grand Slam title? How will pregnancy affect Serena's chase for the title? Tennis players like Kim Clijsters won the US Open in 2009 and 2010 as well as the Australian Open in 2011 after the birth of her daughter Jada in 2008.

My own student, a tennis player wrote, I believe her pregnancy might even inspire her to rise to different level. I heard that she has spoken quite a bit in the past about having children, so I think it could possibly help her focus. She could realize that she might not want to extend her career as much, resulting in her using the next couple years to put herself far out of reach from other players as the best woman to ever play. I'm also excited to find out as well... I love his insight; I think she would too. 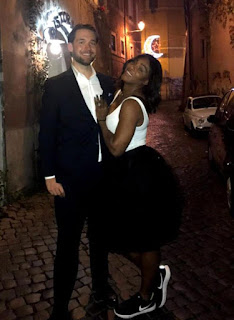 I want to know where she will have the baby. Given that her fiancé Reddit co-founder Alexis Ohanian lives in San Francisco, I hope she has this future great athlete at CPMC, the city's baby factory. Will she have a boy or a girl? What kind of mother will Serena be? Like her father Richard, will she write a 78-page manifesto for this child's greatness? And whose net worth is greater—Serena's or Ohanian's?

All of these questions, obscure and insignificant, life changing, some even inappropriate are but a reflection to me that Serena Williams is much more than a great tennis player. To me, she is a cultural icon that I study, follow, and admire. She is my favorite female athlete. Her older sister, Venus is my second. I am excited for this new chapter in Williams' life and what the narrative will be. I would be more than happy to throw a baby shower for her, and if I did here's information about the game the attendees would play.

First, let me offer a disclaimer: most of the women I love and respect are not keen on "shower games." Wedding and baby showers have what too many of these obligatory rituals. They are meant to facilitate interaction between guests before the shower of gifts that the honoree is required to publicly open. I think it's safe to say though showers are joyful occasions, but these shower games are painful? awkward? well-intentioned but weird...I hope and believe however, I have found a solution.

Disclaimer #2, this game is for a certain demographic: the expectant athlete, coach or sports fan. These women are inherently competitive. We should take to games like we do to our respective sport. Framing this shower game into our paradigm may help. All this game requires is a color printer, a pencil and a knowledge of sports.

Identify great female athletes who have had children/are moms.
Print their photo on an 8" x 10" piece of paper (you can use the images I post in the next blog).
I created this game for my dear friend and beloved colleague, Haley. The head of our girls field hockey program, Haley is one of THE best athletes and coaches I know. She is also a true sister in the sorority of coaching. I loved honoring her with not only a baby shower but making her the highlight a game at her shower was real winner.

I want to wish Serena the very best of health in her pregnancy and blessings for the birth of her first child. I will add her to the list female athletes in this shower game for the next honoree (or for her...I don't live far from Dolores Park girl!)

Game to be included in the NEXT posting.

Posted by Anne Stricherz at 9:57 PM No comments:

A Culture of Lost and FOUND

I refuse to play the "I'm busier than you game." I don't think people want to hear (or read) about how much I have going on in life. Who wins? But sometimes, life really does get hectic. I get stressed and to make ends meet or get things done, something has to give. For some of us it's exercise, for others it's eating right. For me, sleep is what gets tossed and this is costly. Not just to my patience, or to my mental health and well-being—I mean this literally. How is that true? I lose things. I forget them. I leave them behind or somewhere I cannot remember. I retrace my footsteps, I make phone calls, I even show up in person to search for the item my bad self. The lost never has a found. And, it's at times like these, I wish I lived in Japan.

It is a cultural norm in Japan to replace any and everything that is lost to its rightful owner. If you lose your wallet on the J-Rail, you can expect to get it back, credit cards, ID and cash in full. The Japanese people nearly go out of their way to make sure this happens. In fact, there is an 85% return rate on all lost items in this island nation. 85%!!! What do you think ours might be in the US? When I lose something, I try to imagine a world where we return what is not our own in full. I wish more folks knew about this Japanese way of proceeding. But, I don't have to—this culture already exists.

Golf, a sport that I hate (based on today's round) encourages a similar modus operandi. When a golfer leaves behind a club, head cover, sunglasses or even a phone, it is customary to pick it up and return it to either the pro shop, starter or to find the rightful owner. And, if they do not find their way "home," I believe that is because the golfer who found the item (like a club) simply forgets to return it. I am guilty of this offense. I should count my clubs every time I play (its a violation of the rules to carry more than 14 clubs) but I don't. Found club gets left in my bag until I check. I have said more than once, "Where did this club come from?!" I then remember....I do what I can to get it back to my club or the course where I played. I hope I have an 85% return rate on picking up lost items. 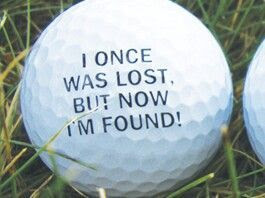 Though I did not lose anything while traveling in Japan, I have certainly lost my fair share of golf items. I have yet to be disappointed by this "culture." For example, I have a plaid head cover from the 2015 US Open: Chambers Bay, that I love. By the time I realized it was missing, daylight was no more. I sought out a marshall who asked the players behind me if they found my head cover. The marshall continued to look for an extended period of time, to no avail. He said, I'll call you tomorrow; we will find it. I left totally unconvinced and mad at myself. Less than 24 hours later, he called me and asked me to return to the pro shop to get my head cover. When I look at this plaid wonder, I am reminded of what is and what could be...

As my friend Alex Montoya has said, "the two greatest words in the English language are What if?!" His words have inspired me to think differently about the world we live in, our cultural norms and social expectations. What if everyone who lost something understood and believed they would get it back.

The parable of the Lost Coin reminds us of the importance of LOOKING for what we have lost. In Luke 15: 8-10, we read


“Or what woman having ten coins* and losing one would not light a lamp and sweep the house, searching carefully until she finds it?
And when she does find it, she calls together her friends and neighbors and says to them, ‘Rejoice with me because I have found the coin that I lost.’
In just the same way, I tell you, there will be rejoicing among the angels of God over one sinner who repents.” 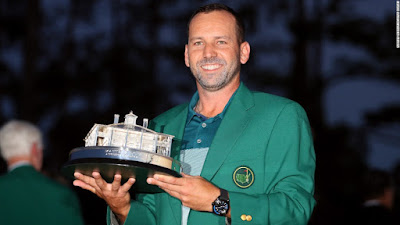 He's right. Their performance was a victory for sportsmanship, for golf and for the Masters. These two players—and others like Matt Kuchar and Jordan Spieth (see his post match interview) found victory with honor. That same friend wrapped it up well when he told me, "honestly, I don't think words can do it justice." But they must, for this story and this very chapter  has to be written.

Thank you for giving us your best effort. Augusta National is a beautiful course, but today it radiated its beauty in the quality of the game.

Photo Credits
Trophy
Hug and other photo
Posted by Anne Stricherz at 10:01 PM No comments: