Bryant Young: We Continue to Speak His Name

At the conclusion of his Pro Football Hall of Fame speech, Forty Niners legend Bryant Young used his platform to offer a few life lessons. A gentle man off the field, he was anything but that on the gridiron. His posture is remarkable, and his presence is noteworthy. When BY speaks, people listen. From Canton, Ohio he said, 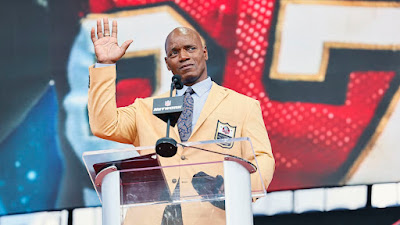 While these lessons relate to his experience as an athlete, the most meaningful one came not from a teammate or coach, owner, fan or from football. This lesson was born from a profound loss, a personal tragedy. It is heart wrenching, and it is Hall of Fame worthy. I need to hear that and remember it. It is just this: “we continue to speak his name.”

Bryant Colby Young, Sr. was a defensive tackle who played 14 years in the NFL with the same team: the San Francisco 49ers. A consensus All-American at the University of Notre Dame, they drafted Young seventh overall in the 1994 draft. He was a four time pro bowler and the NFL’s Comeback Player of the Year in 1999. He is the 29th 49er to earn the gold jacket.

At Notre Dame, Young graduated with a degree in marketing and met his wife, Kristin. They have been together for 31 years and have six children. 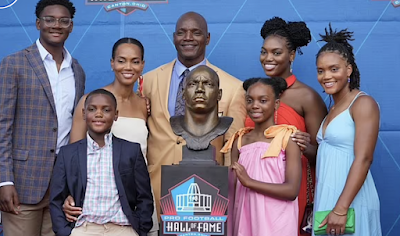 Standing 6’3" tall and weighing in at 305 lbs, the most obvious word to describe BY is “strong.” As noted by the former owner Eddie DeBartolo, “Young was always double teamed, if not triple teamed!” However, Young’s physical strength pales compared to something else. The man has an inner strength that allowed him to admit his vulnerability, share the adversity he has withstood and cry several times on stage.

As mentioned in his speech, on August 11, 2016, Bryant Colby Young, Jr.—Kristin and Bryant’s eldest son—went home to heaven. Their words, not mine. After the first headache in 2014, Colby died of a brain tumor that returned and spread “too far, too fast.”

BY said “He didn’t fear death, as much as the process of dying. He wondered, Would it be painful? Would he be remembered? We assured Colby we’d keep his memory alive and continue speaking his name.” 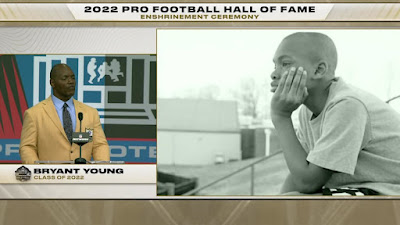 BY said the name Colby fourteen times in his speech. He honored him with the words, “Colby, you live in our hearts. We will always speak your name.” He has. He did. He will.

I believe one of the most important ways to remember a person is to know, say, and share their name. For some, it might be too painful, but to speak a person’s name affirms their humanity. It honors their story and preserves their personhood. Colby was a son, brother, athlete, cook and friend. He may no longer be with his parents and siblings but by continuing to say his name, BY was right: he lives.

Professional football players are eligible for the Hall of Fame five years after their retirement. During this tenth year of eligibility, Canton, Ohio, gave the nod to #97, Bryant Young. Many believe that BY deserved to be a first year ballot inductee. But as noted by BY, he has learned to trust God’s timing. 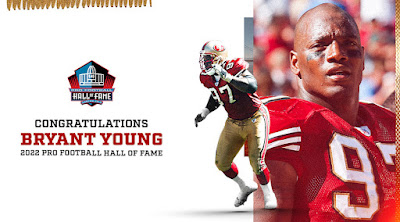 Bryant Young is a proud member of the Class of 2022. Upon congratulating his classmates, he said, “Colby’s favorite number was #22.”

Once again, BY continued to say his name....and we—his fans and followers — make the connection.

I am grateful to have followed and shared in Bryant Young’s Hall of Fame journey. From school in South Bend to his time in the Bay Area, I have always held great respect and admiration for one of the game’s greatest. I have shared his testimony about Colby’s own journey with my students. I would like the Young family to know I too will continue to say his name; I hope that others do the same.

This might be on the most important things we as Christians can do. Those we love and have lost live in our hearts. To say one’s name is to offer the same prayer as one we pray at Mass:

Christ has died. Christ IS risen. Christ will come again.

Posted by Anne Stricherz at 11:46 PM No comments:

The Retiring of #22 in Honor of Will Clark: Fire and Beauty

Go to any Giants game—home or away—and you're sure to see a legion of fans wearing a white, cream, gray or black jersey in honor of #22 Will Clark. Clark, played eight of his 15 years in MLB with the orange and black. He had a tremendous career as a Giant, turning around a team "that accumulated a dry spell of 15 straight seasons without a playoff appearance or even a finish higher than third place in the NL West (SJ Mercury News)" Will was named MVP of the 1989 NLCS, but the Giants were swept by the Oakland A's in the fabled Bay Bridge Series. The World Series ring he wears was earned by other players. 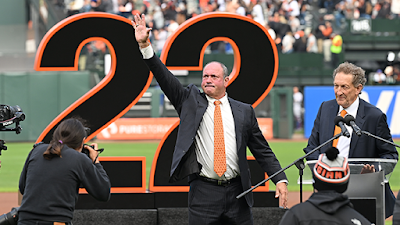 Still, I encourage you to see for yourself. Take your own straw poll of Giants' jerseys and I guarantee you'll see the likes of Mays (24), Posey (25), and even MadBum (40). Those names and the rings that accompany them, speak for themselves. So what gives? Why do countless men and women cite Will Clark as their favorite player? Why is his jersey evergreen? Two words: Fire and Beauty.

During the game, a variety of Bay Area celebrities from James Hetfield, the lead singer of Metallica to basketball great, Chris Mullin of the Golden State Warriors weighed in with their congratulations by way of video tributes. Nine out of 10 of them used the same word to describe Will the Thrill: intense. At one point, I thought "can't they be more creative?" The answer is "no." I'm the one who missed the point. 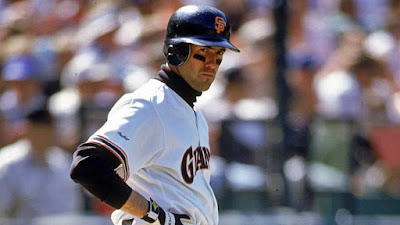 Bob Brenley, Al Rosen, and Kevin Mitchell each described Will as intense because he was. It was his signature, a fire that burned brightly. From his trademark eye black to the way he channeled his 20 x 12 vision behind the plate, every pitcher, TV camera man, manager, and baseball fan could see just how focused Clark was when he came to bat. And that intensity produced results. Will's lifetime batting average is .303. I will never forget the day in 1989 when he lost the NL batting title in the final game of the season. Will finished the season with a .333 average. Tony Gwynn, who collected eight batting titles in his career took it with a .336 average. All intensity aside, I have a feeling even Will was able to tip his hat to one of the game's greatest hitters, and he did as the game was among the two teams.

It's worth mentioning that Clark brought the same intensity and fire to the both sides of the game. As a Giant, he earned two Silver Sluggers (1989, ’91) and a Gold Glove (’91). One of his career highlights at the retirement ceremony featured Will crashing into the cameras along the first base line to make the out. He emerged from a virtual handstand in the media box with the ball in his glove. Unfazed, Clark tossed the ball back to the pitcher ready to get the next out. Intensity 2.0 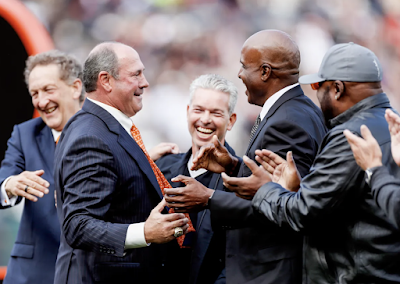 However, fire isn't always friendly. Clark's intensity was known to create conflict in the clubhouse. For example, his relationship with other strong personalities such Jeffrey Leonard and Barry Bonds were often cited as problematic and potentially racist. Over time, both sides have admitted they needed to fan the flames. They did and it was a sight to see both men standing by his side at the ceremony. Bonds' words were heartfelt. The hugs they exchanged were not forced or fake. They were strong and sincere. Just one mark of the fire... and the beauty.

As many times as one heard the word "intense," it's worth noting no one spoke of Will Clark without mentioning beauty. Why? How? Will Clark had a beautiful swing. It was fluid. It was long and it was strong. It even has a name! The Nuschler—Will's middle name, which is a family surname.

One might think, so what? A swing ought to be effective. It's objective it is to make contact and get hits. Whether or not it's beautiful is inconsequential. Right? Wrong. 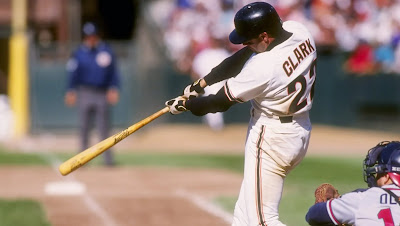 Baseball can be slow. There's a lot of dead time. Outs are routine. Plays to the infield and the outfield come and they go. However, the game is punctuated by action and reaction. And infrequently that action is characterized by something beautiful.

Will's left handed swing—one that hit to all parts of the field— was a thing of beauty. You wanted to watch him hit because of his intensity, and it was hard not to watch because it was so beautiful.

There are but a few players I can name who have a swing as beautiful as Will Clark's; those belong to Darryl Strawberry, Mr. San Diego himself and from what I've read—Ted Williams. I invite you to look for beauty in baseball and other sports—golf, basketball, football and swimming. And look back at Will Clark's swing to point the way.

The San Francisco Giants do it right. They spared no expense in the ritual and ceremony of a great day—one that was  highly emotional for Will Clark and fans like me who are lucky enough to have seen, been a part of and still hold the memories he made. There was fire. It was beautiful. 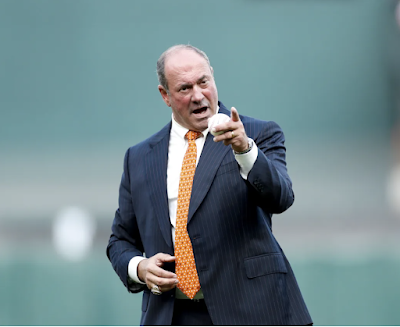 Before Will exited the field in a 1957 Chevy Convertible to the tune of B.B. King's "The Thrill is Gone," he was asked to throw the ceremonial first pitch. His son, William Nuschler Clark, III—Trey—was there to catch the ball. Before the wind up, Will's intense gaze looked at the plate. This was a man ready to throw a strike. However, Trey who has Autism and struggles with spatial navigation missed the catch. If you didn't know better, it looked remiss. But all I could see was Will charging to the plate to give his son a massive hug. The result of that pitch was completely inconsequential. It was a beautiful moment...another sight to see. It was the Fire of Will the Thrill standing on the field and the beauty of the relationships to others and to the game that has left a Giants footprint forever on our hearts. Thank you, Will "the Thrill" Clark. #22

Posted by Anne Stricherz at 10:42 AM No comments: