The Greeks never admired the virtue of humility; Jesus certainly did.  He performed miracles, healed the sick, cast out demons while instructing His disciples to "tell no one."  Humility comes from the word “of the earth.”  People who are “down to earth” are often humble people (ah ha connection/moment).  Humility counters pride.  Humanity is limited; we are fragile and we fail.  Humility can often come at a cost. It is one I am willing to bear.

On the final day of the month of September, it seems that summer has finally arrived in San Francisco.  Every year, we bear the burden of the coldest winter Mark Twain ever spent—July and August for the glory of September and October.  This year however, my status report for the first of those two months is: sunny and clear for all of four days.  A friend quipped, "I didn’t know we lived in Russia." 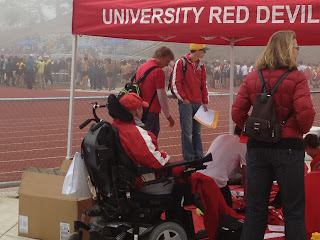 My misery reached new heights at the Ram Invitational in Daly City on Saturday September 29.  The weather was supposed to improve; my hopes were high.  Instead, I stood in a fog bank for seven hours.  At one point it was so thick, I couldn’t see my runners during their race.  All day, I hoped the fog would break before it broke me.  It would have, had I not seen the head coach of the University High School cross country team.

As I was walking to get results, I saw a man in a fully motorized wheelchair, dressed in coaching regalia sitting under a red tent that read “University High School.” I realized it was Jim Tracy. Two years ago, in my blog posting University High School XC: Proving that Sports are a Real School of True Human Virtue I wrote, “Despite his diagnosis of Lou Gehrig’s disease, Tracy mustered the strength to lead and oversee practice, as he has always done since 1994." 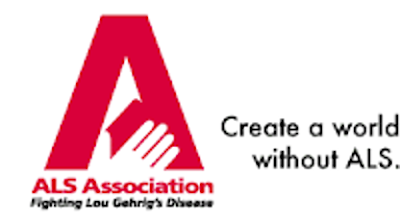 I wasn’t expecting to see Coach Tracy still involved with cross country.  I was trying to imagine how different coaching would be when your mobility is so limited. I thought of the effort he and his colleagues make to get on a course that covers hills, trails and crowds of hundreds of people.  I was humbled by his dedication and his love for the sport. 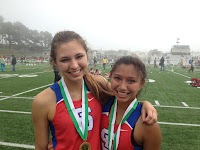 Jim Tracy’s presence and commitment to his runners is inspiring.  I hope and pray his battle against ALS is pain free and filled with God’s grace.  I want him to know he lifted the metaphorical fog for me.  He kick started my Indian Summer, taught me a gentle lesson in humility and made me appreciate this great sport that much more.

Posted by Anne Stricherz at 11:05 PM No comments:

Every teacher knows no class is the same.  Coaches will testify to the same truth—no team has the same chemistry, personality, give and take. 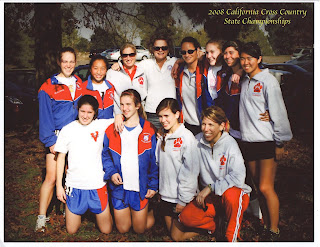 Three years ago I taught Foundations of Ethics: Morality and Justice to a boisterous group of young men and women who simply put, rocked my world.  This first period class of 30 juniors came into class ready to discuss any and everything, every single day.  They were never quiet and I hated them for it.

I like a fair bit of order and control, respect and discipline.  That school year we had a significant number of tech problems and any lesson plan I had that involved using the Internet failed.  I would stand in frustration at my computer and attempt to fix the problem; I would switch from wireless to the standard network, I restarted my computer, I logged off and back on.  No luck.

Most students sit quietly and wait respectively for the lesson to continue.  Not this class.  I knew I was supposed to love them for their enthusiasm but I was often frustrated with their volume.  I was once informed at a teacher in-service “the one doing the talking is learning.”  I considered this a valuable insight, except when it came to this group of students. They sought any break whatsoever as an opportunity to socialize, laugh, discuss the class material, congratulate their classmates, sing “Happy Birthday!” you name it.  It didn’t matter if it was 8:30 a.m. on Monday or the day after we lost the to our rival in the Bruce Mahoney game, this class was talking.  Tech be damned!

One day in the most unexpected way, they won me over.  The bell rang indicating that class way over.  The song “These Words” by Natasha Bettingfield came on the school PA and one of my students, Kevin Barker who recognized that he had the God-given talent to make people smile, started to dance.  He busted a move and instantly another 10 kids joined him.  Kevin did what he’s good at…and I smiled. I laughed and I let go.  Their energy and enthusiasm, their noise and their laughter were no longer the enemy.  It was a gift. 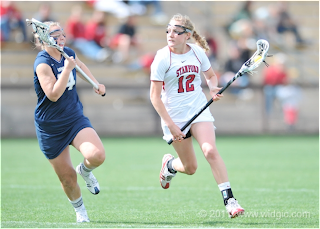 In fact two students from that illustrious group spoke recently in my Sports & Spirituality class about their experience as student athletes at St. Ignatius and now in college.  Rachel Hinds a four-year varsity member of the lacrosse and cross-country team now plays lacrosse at Stanford University.  Her classmate, Johnny Mrlik plays both basketball and baseball at Vassar College. 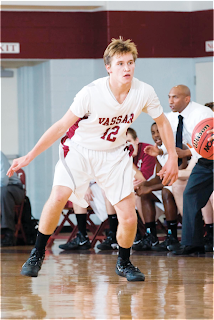 Rachel addressed how sports teach you about failure.  In life, things will not always go our way.  Learning from failure and even how one will react to it are important life lessons.  She appreciates the way that sports can bring people together, a community of support makes all the difference.

Johnny added that he misses saying the Prayer of St. Ignatius with his teammates.  He now recognizes prayer was an effective way to center before a game.  Johnny added that you do not get to choose your teammates.  It is always important to learn how to work with people, especially when you have a common goal.

I said goodbye to Rachel and Johnny and thought, “I am so proud of the people they are becoming.”  I think they are too.  Their promise and potential that was evident in high school is beginning to unfold now in college.  This is not something to take for granted.  Later that same day, I came home to discover that a young man in that very same class, Ben Aguilar has been diagnosed with Acute Myeloid Leukemia (AML) and started undergoing chemotherapy this week.   I read an e-mail from our principal that states the following.

This is a very serious form of leukemia and his doctors believe he will need a bone marrow transplant to achieve a full cure. Unfortunately neither of Ben's sisters are good bone marrow matches so the the Aguilar family is urging everyone they know between the ages of 18-60 to get tested to be a bone marrow donor.  Even if you don't match Ben it could always help someone else out.  It is as simple as logging into marrow.org and signing up for a test kit.  (I completed the free registration in about 10 minutes.)  You can also put in your zip code and find the nearest bone marrow drive in your area.

Ben is at Kaiser in San Francisco getting his initial treatment and is in good spirits.  If a donor is found he will get the transplant at Stanford in the upcoming months.  The sooner we find a donor the better! 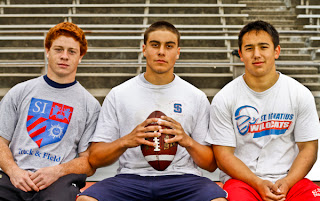 I can still see Ben in his shirt, tie and SI jacket on game day.  He loves football.  He was tremendously respectful and kind.  He too was a contributor to the volume of that class.  He was more of a listener than a talker, but he very well may have been one of the students dancing in class. He has the promise and potential to stay strong but he needs people to come together, he needs a community of support, he needs our prayers for his health and for a worthy donor.  The words of the Prayer of St. Ignatius have never been more fitting.  Lord, teach me to be generous.

I was struck by the spectrum of life.  In just one day three students from the same class touched my heart.  I hope their experiences at St. Ignatius, in their ethics class and from athletics prepare them for the best of the life and the most challenging.