When is the last time you saw the face of Christ? This is a question I have been asking myself everyday in the month of September.  It’s a great question, a powerful one, and an invitational one.  In some ways, I think it is THE question.  I also think the question relates, believe it or not, to the “The Notre Dame brand.” 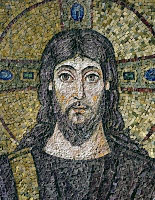 Every night before I fall asleep, I read from a daily missal “Living With Christ.”  The back page invites readers to “Use our cover for prayer and reflection.”  It features “The Face of Christ” one of the oldest mosaics in Church history.  This month in Mark’s Gospel, Jesus asks his disciples “Who Do You Say That I Am?”  The reader is guided to consider two questions while sitting with this image of Jesus.
My answer to that question however has been another question.  It is: When is the last time you saw the face of Christ? 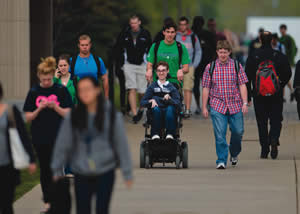 I was reminded of this question thanks to an article in the Summer 2012 issue of Notre Dame Magazine.  I read the story Matt Swinton’s declaration of independence and came to learn the 2012 graduate was diagnosed with spinal muscular atrophy as a baby and given a year to live.  He lived and he excelled in school, so much that he was accepted at a number of top-ranked universities. One of those schools was Notre Dame. Grisoli writes,

Spinal muscular atrophy affects the voluntary muscles, leaving Matt extraordinarily weak. While he can use his hands, he cannot raise his arms; he cannot roll over so must be turned periodically. Because respiratory muscles are also voluntary, Matt cannot take a full breath, cough or clear his lungs — so any infection becomes life-threatening. South Bend didn’t seem like the place for him, because cold weather is extraordinarily taxing on his muscles, given his condition.
But Matt loved Notre Dame, where he had attended some football games. And he wasn’t the only one who persuaded his parents. “Notre Dame did the majority of the convincing,” he says. Before he even wheeled onto campus, the University architect’s office had devised a plan to renovate a dorm room to meet his needs.
Roommates were one of the aspects of college Matt wanted most. Stand-up comedy is his hobby, and he needed people to critique his jokes. Other schools had offered single rooms and couldn’t promise the same residence hall each year. But just off the second-floor lounge of O’Neill Hall, architects created a suite of rooms that connects to a private bath. Matt had one bedroom for himself; his two roommates shared the other. Instant community.
After Matt arrived on campus, the health attendants hired to assist him proved unreliable. Overruling his parents’ concerns, he convinced them the students he’d met at Notre Dame were far more capable than the professionals. He circulated an ad in the dorm, and 11 students in O’Neill stepped up that day. So for the past four years, several young men have helped Matt with every daily task imaginable — washing, dressing, compassionately carrying him from wheelchair to sofa to bed. Every night, including weekends, they took turns sleeping on the cot beside his bed and waking four to five times to turn him to keep him comfortable and prevent pressure sores.
Members of this humble group have become Matt’s dearest friends. Interviewing them one day, I thought of a priest who once asked me, “When is the last time you saw the face of Christ?” In my head I was shouting, “Right now! Right now!” 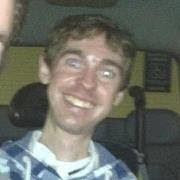 I read what those young men in O’Neill did for Matt and my eyes started to pool.  When I read Grisoli’s response, I burst into tears, a royal floodgate.  She was right, the community that Matt sought after in Notre Dame became Christ for each other.  I have no doubt that if you asked them the same question, they would say “everyday.”  Their friend Matt, who by society’s standards is incapable of so little has given them so much.  His weakness has afforded them greatness—the opportunity to be Christ for one another.
I shared this story with my students and their parents at Back to School Night because it provides insight and examples into the central questions of the course I teach.  Foundations of Ethics: Morality and Justice asks:
Furthermore, the study of ethics is a query into What should I do? What ought I do? and How does Christ make a difference to the good? 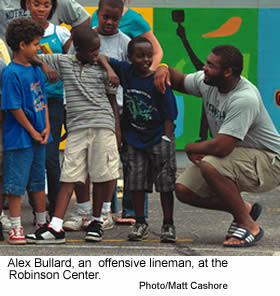 I believe that my students would like to respond as those in O’Neill have.  While many have, others have been Matt.  They too want independence.  They too need help, but are afraid to ask.  Matt Swinton’s story shows us the reward of asking for help.  We can become Christ to the other.  We can also help others see Christ in themselves.
Often, we do not know what we can or would do unless put into a position.  The goal is to get to a place where one sees doing the “good” as more than just optional or obligatory.  Ideally, it is invitational.  I would like to believe that Notre Dame invites its students to become a community.  And my sense is this community invites its members to “the good,” and does so often.  Matt Swinton’s story is one case in point.  His parents had significant reservations and yet “Notre Dame did the majority of the convincing.” They community did "the good."  I am glad they did. 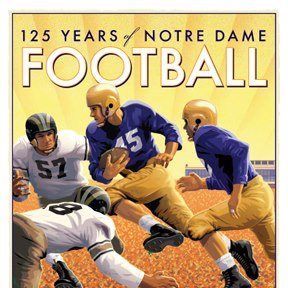 Head football coach Brian Kelly has recently used the term “Notre Dame’s brand” which has sent alumni and the Irish faithful into bipartisan camps.  You have those who are for the “21st century marketing” and those who want the 125 years of tradition to remain pure.  They abhor the split-colored dark blue-and-gold helmet, aerodynamic uniform and the thought of a Jumbotron video screen.  Artificial turn inside Notre Dame stadium is the equivalent of football’s gravesite.  The other camp recognizes a few changes have been made over the years—the growth of the stadium for one or the schizophrenia of green and gold to blue and gold and back.  A few changes may be a welcome thing.
Regardless, of your viewpoint, I believe the real “Notre Dame brand” is something that can’t even be branded.  Even the “What would you fight for?” commercials don’t come close.  The “brand” is the spirit of Notre Dame.  It is the time and talent of this community on the football field and in O’Neill Hall.  It is something that allows its students to see Christ in one another and be Christ for one another. Don’t you dare market it. Live it. Be it.
Photo Credits
Face of Christ
Matt Swinton
ND Football

Posted by Anne Stricherz at 2:34 PM