My First Love Letter to the 2012 San Francisco Giants

The 2012 San Francisco Giants proved that the National League West title can’t be bought, it must be won as they clinched a spot into the playoffs with 10 games remaining in the season.  Make no mistake about it, I am thrilled the Giants won.  But in my heart of hearts, it feels different than 2010, when the “Hunt for an Orange October” wasn’t clinched until the final game of the season.  So why is it different?  I, like so many San Francisco Giants fans fell in love with the 2010 World Series Championship team. 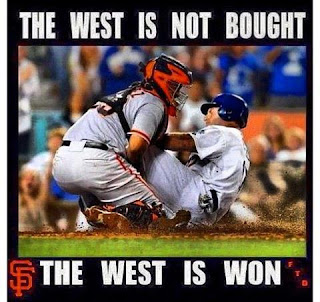 Superior General of the Society of Jesus (the Jesuits) Pedro Arrupe said it best when he wrote "Nothing is more practical than finding God, that is, than falling in a love in a quite absolute, final way.   What you are in love with, what seizes your imagination will affect everything. It will decide what will get you out of bed in the mornings, what you will do with your evenings, how you spend your weekends, what you read, who you know, what breaks your heart, and what amazes you with joy and gratitude. Fall in love, stay in love, and it will decide everything.” 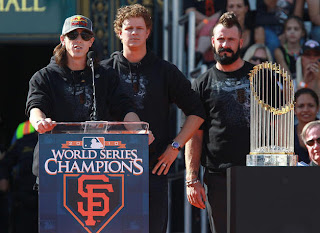 That team did all those things.  They seized this city’s imagination.  A friend today, said he wasn’t sure if he was emotionally prepared to give all that a ball club (formerly) known for "torture" demanded of him, of us.  Without a doubt, it affected how I spent my weekends.  For a full month, I got out of bed with a whole lot of zeal. My heart was broken when I was unable to attend the Championship parade (I'm still not over it). None of us would trade those memories for a moment. When you are in love, you give a whole lot--but you feel as though you gain even more.

Staying in love with that motley crew wasn’t exactly an option.  In the world of “rent-a-ballplayer” many were let go (Edgar Reteria, Juan Uribe).  Others retired (Pat the Bat) and still others’ careers ended too soon (Freddie Sanchez). 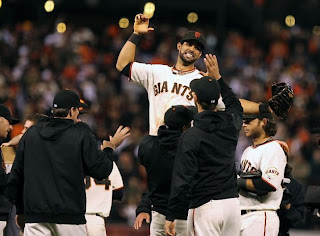 So I will seek to love these boys of summer in their own way.  After all, this is a team that in no way surrendered when their star player tested positive for PEDs; it could be argued that his departure was the shot in the arm (pun intended) they needed.  This is the team that featured a “PERFECT” June thanks to a starting pitcher that now has a winning record.  This is also a team that uses no fewer than six pitchers in the final two innings of games on a nightly basis.  Indeed, love is never easy.  It requires a sort of surrender, it to be open.  But like grace, it is a total gift.

Thank you to Larry Baer, Brian Sabean, Bruce Bochy and the rest of the 2012 squad for the gift of this season.  Perhaps this is my first love letter to you…
Photo Credits
2010 Giants
2012 Giants

Posted by Anne Stricherz at 9:54 PM