When it comes to sports and music, I never doubt the opinions of my good friend and classmate Alex. On Facebook he wrote "The Bee Gees documentary on HBO is one of the best documentaries I’ve ever seen." I immediately gave it a like and knew I was in for a treat. Their story "The Bee Gees: How Do You Mend a Broken Heart" is the gift I treasure the most this Christmas. 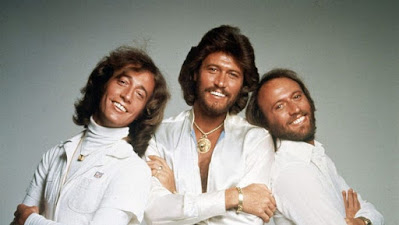 The two hour documentary opens with the faint but familiar echoes of Stayin' Alive. The first video footage features the band in a limo, escorted by California Highway Patrol across a bridge and into a stadium I know so well. The first shot of Barry, Maurice and Robin Gibb is on stage at the Oakland Coliseum. I feel for but a moment as if this program was created for me to see. What follows is number eight on my 20 for 2020. Thank you to the Brothers Gibb.

At first, I wondered why the director, Frank Marshall, chose the name "The Bee Gees: How Do You Mend a Broken Heart?" To me, that song, though unbelievably beautiful doesn't symbolize the energy that is synonymous with their disco dancing, popular, and upbeat music. "How Do You Mend a Broken Heart" is soulfully haunting. Truly, it carries the weight, the pain the sadness of heart that aches. Why name a program after it? I found my answer in the final ten minutes...the point at which the floodgate for tears started to flow. In fact, there a few are still coming down now....

Born three years apart, Barry and his twin brothers Robin and Maurice acted more like triplets. They developed a three part harmony—but one reason for their tremendous success. Noel Gallagher, co-lead vocals for the band Oasis, said "When you’ve got brothers singing it’s like an instrument that no one else can buy." And yet, Barry admitted, "if we hadn’t been brothers, we wouldn’t have lasted half an hour."

Both Robin and Barry wanted individual recognition but their voices blended in a way that something totally new and dynamic was born. The documentary does an excellent job of informing the viewer and equipping the ear to hear and understand their own voices cannot be distinguished one from the other. Marvelous. But there's more to this pop band than just harmony and melody. As written by Owen Glieberman in ‘The Bee Gees: How Can You Mend a Broken Heart’ Review: The Enthralling Documentary,"

at the end of the session, when they were fooling around, Barry added the sunburst falsetto echo of the chorus. That one improvised moment transformed their sound. Their signature would now be a falsetto so high, so gospel pure, so Bee Gees that it poked through the clouds. (Justin Timberlake compares their voices to trumpets.)

I love when an album lists "voice" as the instrument of an artist in a band. How true for the Brothers Gibb, as this new, improvised instrument changed the trajectory of their musical careers.

This blog seeks to explore the relationship of sports and spirituality, but quite often I feel called to write about music—rock 'n 'roll, pop music, country music and spirituality. At times, this is no stretch at all. For example, in the documentary, Chris Martin, the lead singer of Coldplay said, "Music is this huge energy that is flying around everywhere and if you’re lucky, you get little slices of it that turn into songs." I would say the same for sports.

The Bee Gees wrote over 1,000 songs, including 20 number-one singles in the U.S. and the U.K., and those songs became the soundtrack to a lot of people’s lives. Though most are pop tunes, I find several of them to be spiritual.

The influences, the inspiration, the harmony and sound of "How Deep is Your Love" might be the most beautiful story within this film. The keyboardist on the song tears up as he says "that song came from my heart." He didn't even need to say those words....listen—you will understand.

Martin adds "the Bee Gees are a brilliant chapter in the book of music." That is a book I cannot and do not want to live without.

Glieberman of Variety magazine adds, "part of the film’s excitement is how thoroughly it explores the question of where, exactly, the Bee Gees fit into the pop firmament. How deep was their greatness?" I love this question. It is one that will stay with me...one I welcome around the fire pit (COVID certified).

I suppose Sir Barry Gibb answers the question. He says, "When I think about it now, I think about how it all started. We just had this dream and we thought well, what do we want to be famous for? Turns out it was the songwriting. Everything we set out to do, we did. Against all odds." I am so grateful they did.

The soundtrack of my life, a girl born into a family that loves and celebrates music has "Saturday Night Fever" as one of the earliest chapters. After watching the documentary, I took to the streets of San Francisco, an urban setting that has fallen on hard times and I hear the beats of that same sound track with a deeper appreciation. And as with any holiday, I reminisce about loved ones we have lost and the title "How Do You Mend a Broken Heart" isn't lost on me. I'll leave Barry's final words to underscore the rest (heavy).

What an awesome Christmas gift. Thank you, Alex. And thank you Barry, Maurice, and Robin. And rest in peace Maurice, Robin and Andy. I am confident that heaven sounds better because of your harmonies.

FYI: Songs written by the Brothers Gibb recorded by others: Islands in the Stream, Grease,  Woman in Love, If I Can't Have You, Heartbreaker, Emotion