The Devil or Dusty? Can a Fan Cheer for the Houston Astros?

On January 10, 2011 I stood in some San Francisco bar next a man who is arguably the coolest person I have ever met. I know the date because I was there to watch the BCS national championship football game. Auburn beat Oregon 22-19. However, I remember the evening because that cool cat who walked in with his fedora in hand, wearing browline glasses long before they were trendy again was none other than Johnnie B. Baker Jr. For those in LA, San Francisco, Washington DC and now Houston, that is the proper name for none other than Dusty Baker—the manager of the AL Championship team, the Houston Astros. 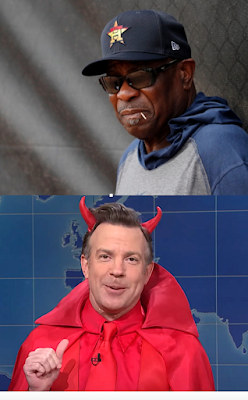 At 72 years young, Baker is the second oldest active manager in MLB (Tony LaRussa, skipper for the Chicago White Sox, is 77). The last time Dusty managed a World Series game was in 2002, which San Francisco Giants fans remember all too well. The team formerly known as the Anaheim Angels, and their rally monkey, do too. That October Classic however, is not the problem. No, the quandary that Baker presents for those of us who love him and the magic he brought to the Bay is this: Can I cheer for the Houston Astros because I want to see Baker succeed? Or if I do, am I cheering for the Devil himself? Thoughts?! 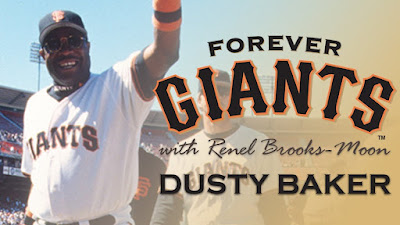 Baker has been named Manager of the Year three times, and each one of them has been with the orange and black, Under his leadership the Giants won the division two times. He brought us to a Game 6 and to Game 7 of the World Series. It still hurts, but only because he took us so far. Here in the Bay, we referred to his magic as "Dustiny." His son was the bat boy that J.T. Snow saved from harm's way. It's hard not to want to see him succeed....unless of course you realize who he is leading.

In 2017 and 2018 the Houston Astros used technology—as fancy and sophisticated as hitting a garbage can— to steal signs of opposing teams. Their blatant and extensive violation of the rules AND their 2017 World Series championship has left most baseball fans disgusted and disillusioned. The punishment from MLB in no way fit the crime. Although no titles were stripped, the tarnish has yet to fade. And yet, here they just three years later. How can that be?

Well, Saturday Night Live's Weekend Update had an answer: the Devil. Replete with red horns, cape and pitchfork in hand, the devil aka Jason Sudeikis admits, "the last few years have been pretty good for ole Beelzebub." He adds, "I've been sticking my fork into sports. You saw that the Astros won. They shouldn't have." Sports fan can't help but know...and understand.

This makes cheering for Dusty's team tough, and yet—there he is...still looking sharp in sunglasses, toothpick in tow, and getting the job done. But why?

Given the extent of the team's sign-stealing scandal, most baseball pundits wondered how anyone could step into Houston's dugout. They were forced to clean house—both the manager and the GM were fired. But, only a brave and willing soul could step in and step up to the challenge and opportunity to resurrect this team. Dusty Baker was an is the man. 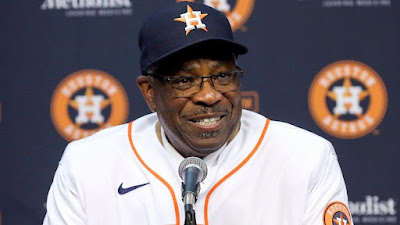 Dave Sheinin of The Washington Post, wrote what we all know to be true.

When the Houston Astros named Dusty Baker their manager in January 2020, the stench from the team’s infamous sign-stealing scandal, uncovered two months prior, was still overwhelming. In hiring one of the most well-liked, well-respected and well-rounded figures in the game at such a low point for the franchise, the Astros barely concealed what Baker’s true purpose was to be in Houston.

He wasn’t there to be a great field general. He was there to be an air-freshener. Everyone knew it, most of all Baker, who took the job anyway. If the Astros were going to use him to achieve their aims, he could also use them to achieve his. It was, both in concept and in the way it ultimately played out, a win-win scenario.

While I read countless articles about why the Astros hired Dusty, I found little to no information about why Dusty chose Houston. This bothered me until I added it up. This is just one thing that cool people do.—they have the ability to leave you guessing...and wondering. You may or may not be right. It's only for them to know. They appear stoic, unaffected...in short: cool.

I have a hunch this is exactly how Dusty Baker walked into that dugout in Houston on Opening Day and Game 1 of the 2021 WS. Stay calm, be cool. Build consensus. Work hard. Win big.

Devil or Dusty? Dusty all the way. Besides, the Devil hates cool....