The Atlanta Braves defeat of the Houston Astros in Game 6 brought the first World Series title back to Atlanta for the first time in 26 years. It also brought the conclusion of the 2021 season which always leaves me a little remiss. I find myself in search for a new normal the day after the Fall Classic. I carry feelings of malaise and sadness. Maybe I shouldn't, but that's what baseball does to its fans. 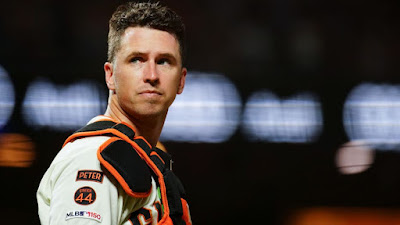 This year, the mourning was punctuated by big news: Gerald "Buster" Posey, the 5-time all star catcher on my San Francisco Giants announced his retirement. Though fans were happy for #28 and his family, it is more than bittersweet. We carry grateful hearts, but tender hearts.
In the days since his breaking news, there have been no shortage of personal testimonies far and wide of what Buster Posey has meant to baseball and to the only MLB team he has ever played for. Fans here know a lot about him. I'll take a shot and offer 7 things you might not know... Enjoy!

1. Hails from the same small town as Luke Bryan
Although Buster Posey's walk-up song was the country hit "Burning Man" by Dierks Bentley, he could have had one by fellow Leesburg, GA native Luke Bryan. The country mega-star and the baseball all-star both graduated from Lee County High School. For a town of not quite 3,000 people, these men have certainly put it on the map. 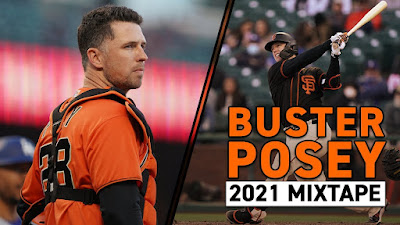 2. Is a lifelong Braves fan
I don't know Posey's competitive mindset well enough to know if it allowed for him to cheer for a team that wasn't his own in the post-season. However, given that he grew up a Braves fan (which is a surprise to no one) their victory might be—to him—the second best outcome to the 2021 season.

In his open letter to Giants fans, he recalls the significance of that connection. He said,

Over the years, I’ve heard a lot of stories from different fans about what the Giants mean to them. Or, what baseball means to them. When I think back on those stories, there’s usually one common denominator -- family and friends. When I was a child, one of my earliest baseball memories was Sid Bream of the Atlanta Braves sliding into home plate to beat the Pittsburgh Pirates in Game Seven of the NLCS to send the Braves to the World Series. To be able to share in the joy with my grandad that Christmas as he proudly displayed a picture of Sid Bream sliding into home on his t-shirt is a memory that I’ll never forget.

Thanks Buster for the memories you have provided to countless families and friends! 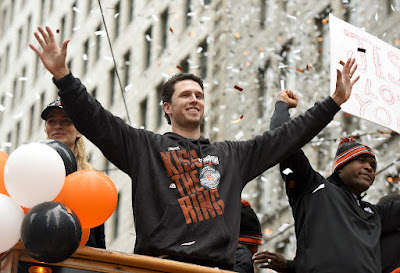 When the Giants won their first World Series title in 2010, half of the student body at St. Ignatius College Prep was absent from school. Why? They accompanied their families and friends, wearing orange and black, standing all along Market Street for the raucous victory parade.

Thanks to the WCAL III Cross Country meet, I was unable to attend. I considered at least 1000 iterations of how I could get myself near City Hall for but 15 minutes of the ceremony between class and coaching. It wasn't meant to be—that is until two years later, when the Giants did it again.

Rather than keeping the deans and attendance office from hearing false excuses and taking not of 1,400 kids, the administration decided to cancel classes. Thank you SI! and thank you for doing it again in 2014.

I would like for it to be known, I went to Bob's Donuts and purchased an apple fritter as my parade breakfast. Victory tastes so sweet. 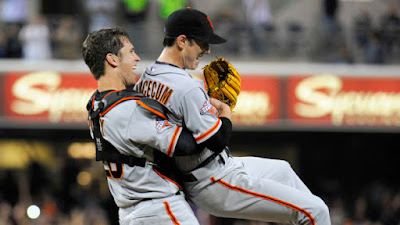 4. Should be known for this personal motto: Why Not?
In what has to be my FAVORITE Buster story, Mike Krukow recalled riding in the elevator after the Giants defeated the Phillies in the 2010 NLCS. For the sake of context, this feat was unexpected. The Phillies had a pitching rotation like no other and were coming in off a loss in the 2009 World Series.

Before he stepped out to go to his room, Kruk turned to Buster and said "Enjoy this, it doesn't happen very often."

To which Buster replied. "Why not?"

Great question, Buster. You obviously put some teeth behind that...

I ran this idea by another friend who replied, "But WillieMac didn't win it all. Hard to make an argument against three rings!"

And how we wish it were four.

Sports fans live for spars such as these. I personally think Madison Baumgarner might be #3. You? 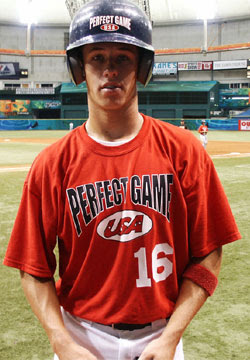 6. Played four sports in high school and all nine positions in a collegiate game
Nothing really surprises me about this fun fact other than one sport isn't what I was expecting: soccer. My guess would have been the sport mentioned below. The others were what you can expect: football, basketball and baseball. Which leads me to wonder what position he played in each, given that he played all nine in a FSU baseball game.

7. Is an avid golfer
Look at this baseball swing and this fun fact should be a surprise to no one. Although golf was not one of the four sports that Posey played in high school, he began playing at the age of nine or ten.

In 2011, one year after winning his first World Series championship, he played Augusta National. Spoils to the victors!

In 2015, again, one year after winning a World Series championship Posey and his teammate Matt Cain were invited to play in 2015 AT&T Pebble Beach National Pro Am. How's that for playing two top five courses in America.

And when asked by PGATOUR.COM: If you could play with any player on the PGA TOUR, who would you like to tee it up with? He said, "That’s an easy answer. I think I have to go with Rory. I got a chance to meet him; he was in the clubhouse a few years ago. He’s not a very big guy and he just bombs it. And has great balance after every swing. He’d be fun to watch." 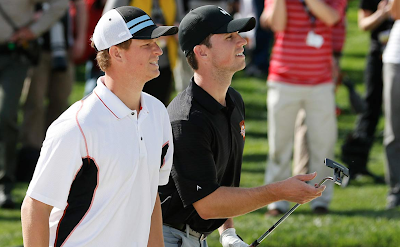 In Conclusion
Thank you Buster for your leadership, your talent and grace. We were lucky to have you in Major League Baseball as a Giant your entire career. Godspeed and God Bless