The 2021 San Francisco Giants Remind to ask the Question: WHY?

The San Francisco Giants won the National League West for the first time since 2012. Go Giants! In the eight years since their last title, the Orange and Black's heated rival the Los Angeles Dodgers have emerged victorious...you guessed it: eight times. And in that time, the Dodgers have won one World Series, three National League pennants and with one of the highest payrolls in all of MLB, endured my taunts such as "The Giants prove the West cannot be bought it must be won." Ah baseball.

To have the Giants back in the post-season has brought a much needed energy and excitement to the City by the Bay. The autumn skies certainly have a hint of something new. Yes, it's Orange October and with a class like Sports and Spirituality I have an opportunity, if not an obligation to talk about it. But why? That is exactly the reason I can and do. The 2021 San Francisco Giants have reminded just how important and fun it is to ask "Why?"

In Athletics, we ask "The why" on a regular basis. As a department, we have a list of reasons why students ought to play high school sports. We invite our student athletes to know their "why" and share it with their teammates. We ask coaches to consider why they coach; there are many reasons not to. Thank you, coaches! But this isn't the why of which I speak. This why is a different one. 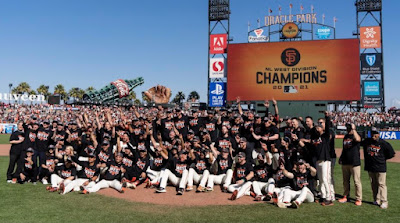 I just love this photo of the Giants, on the field, inside Oracle Park. I included it in my presentation and shared it with my class. "What do you think? I asked? Pretty exciting, stuff huh?"Rather than chaps or cheers, a spirited Go Giants! or even a "hell yeah," one student said "overrated!!" He said this not once but twice. Another student said "They suck!" I do have one Dodger fan in this particular class, but he wasn't the one who said it. I stood there totally confused.To the student who yelled "overrated!" I said, "What team do you follow?" He told me "the Padres." "Interesting," I said. "Many picked them or the Dodgers to win the Division. So much for overrated." At that moment, I clicked to my next slide which had the stat from ESPN. I read it out loud. "Wow, ESPN picked them to win 70 games. If you put money on this team before the season, you would have an incredible payout right now." 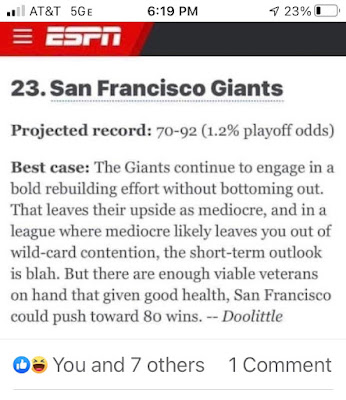 The next slide had the team with the number 107. I informed the student who thought the Giants suck that this is the most wins by any Giants team in the history of the organization. I looked to the lone Dodger fan and said "the Dodgers had 106 wins, which is impressive too. Both teams were 23-7 in their final 30 games. That's a winning percentage of .767. I mean this with sincerity, it must have been frustrating to be a Dodger fan. That's great baseball."In order to not lose the entire class I added, "I know some of you are thinking of the Golden State Warriors. Yes, they won the most games in the history of the NBA but didn't win the Championship, so, you're right... nothing is a given. But, I don't think this team was overrated. They don't suck. Instead, I hope the question you are asking or that we should be asking is "WHY?!!! or How?! Why was this team so good? How did they do it? Now that's an exciting question!"

The answer to that question is the story of a season. I think it is what makes life interesting. It is certainly worth discussion because apples to apples the Giants are NOT like the Dodgers. While there are no gaps on the Dodger line-up, the G-men feature a lot of new names. I prefer to say that over "no -names." 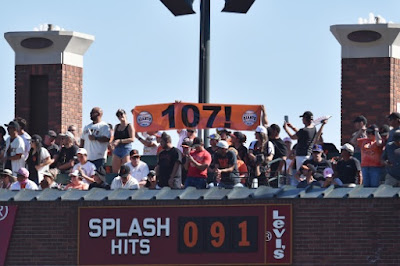 Thus, the lesson began. I shared but four reasons WHY this team is so good. Three of them were "intangibles" named by the manager, Gabe Kapler. The fourth is about him.

As written on Yahoo! Sports, "Kapler credited his players for showing toughness and grit, and for having the vision for making the NL West title the goal when nobody around the game thought they could compete with the Los Angeles Dodgers and San Diego Padres.

Toughness: "We all knew what the projections were and what the industry thought of us as a club. There were some intangibles that those viewpoints and those projections failed to take into consideration. The first intangible is just toughness. We had so many points during this season where it would have been easy for us to quit and we never did. We battled back.

Grit: "Another intangible it didn't account for is grit. A lot of people in this group got a little bit beat up this season. We had some injuries. We had some guys who were struggling for long periods of time, and they just got back to work every single day. They stuck with their process, they got stronger, and they came back better, and because of that we're standing where we are today.

Vision: "The final intangible and probably the most important one is vision. At the outset of spring training I was thinking about setting expectations for this group, what we could come to expect for this season. I knew we had a lot of talent. But I wasn't sure. We have some veteran players who said we want to win the National League West. So at that point, this entire group surrounded that vision and made it a goal. We never came off that goal, and that's why I feel that pride today in this group. I'm so grateful to each and every one of you and everyone here who supported us this evening. Thank you." 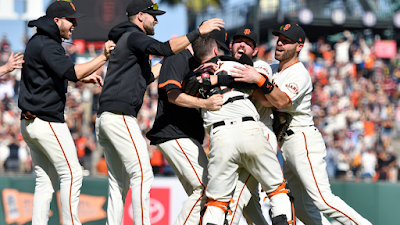 A lot of fans were dubious of Farhan Zaidi's choice to hire Gabe Kapler. Bruce Bochy certainly left big shoes to fill and Kapler did not have success in Philadelphia. The success of this season however is inextricably tied to one hallmark of his managerial style: total and complete preparation. Kapler is known for over-preparation. From spring training through the post-season, no one is more prepared that Kap. The team, the fans are privy to its dividends. I told my students to think about their own coaches and teachers who are always prepared. Does that class? that season? each practice feel different? I think you can tell the difference. I then invited them and myself to think about toughness, grit and vision. Are those characteristics of their own teams? Would your teammate or coach identify that intangible in you?There are many other reasons why the San Francisco Giants had a great season. I love hearing what other have to say in answer to that question "Why?" And it is a question—as a teacher—I don't want to stop asking of my students. In fact, I wish I had asked my students WHY they thought they were overrated....or WHY they think the Giants suck. I'm curious to know what they would have said. In the meantime, there is still work to be done for this team. I will look for evidence of those attributes along the way.