We are still waiting for Summer in San Francisco. Once known as "Indian Summer," this season is now as elusive as a title for what should be the best time by the Bay. Hope springs eternal, or in this case, autumnal. Thus, it is only fitting that four full days into the official season of Fall, I write my Sports and Spirituality review of the Summer 2021 issue of Notre Dame Magazine. There is so much that is so good that I couldn't let it slip away. Here are a few connections, highlights and S&S nuggets. Enjoy!

ND adopts mobile-only ticketing for sporting eventsBeginning this fall, the University has shifted to mobile-only ticketing for all sporting events. Is anyone that surprised? Well, yes and no. I still know a ludite or two who don't have the capability on their smartphone. "The change which has been in the planning for several years, was accelerated by the coronavirus pandemic and the need for a contactless way to distribute tickets." The University has encouraged "those who don't own smartphones to transfer their tickets electronically to a person with whom they plan to attend the game." Student tickets have been mobile only since 2014. At the Ask Jack event I attended before the home opener, Irish AD Jack Swarbrick admitted the University is looking for a creative way to commemorate each game. In the past, fans saved ticket stubs—some framing them with a photograph or placing them inside a game program. I know I still have the paper ticket book from my freshman and sophomore years. It lives inside a scrapbook beside friends from Farley Hall. Indeed, we want much more than digital memories...

Chesterton's things find themselves at ND's London gateway
G.K. Chesterton, the English Catholic convert and author was a philosopher, lay theologian, and literary and art critic. Known as the "prince of paradox," I first learned of him from those who referenced his work in Orthodoxy—a classic of Christian apologetics.

As reported in this article, "a collection of Chesterton’s books and personal effects is safely in the possession of the University of Notre Dame (USA) in England, the official British name for Notre Dame’s London Global Gateway. This November, a delegation led by the University’s president, Rev. John I. Jenkins, CSC, ’76, ’78M.A., will travel to Fischer Hall, the school’s academic building near Trafalgar Square, to dedicate the G.K. Chesterton Collection."

Not only did Chesterton lecture and teach at Notre Dame, he "attended the first-ever football game at Notre Dame Stadium and balked at the raucous applause and chants when he was introduced to the crowd. “My, they’re angry,” he said to his driver. “Angry?” the Irishman replied. “Golly, man. They’re cheering you!” Chesterton found that hilarious. He later wrote a poem, “The Arena,” about the game he watched that day." 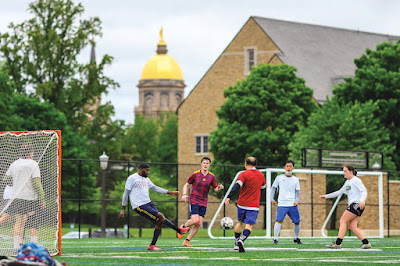 The Game Played 'Round the WorldThe work and contributions of senior photographer Matt Cashore ’94 is a significant reason ND Magazine is outstanding. In this photoessay, he "traveled the globe on University assignments, he noticed a love shared by humans everywhere." I just wish one of the photos included girls and/or women at play. The "beautiful game" is for one, for all. 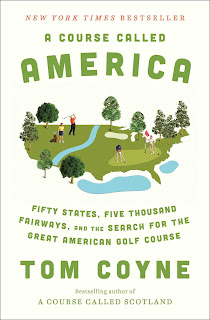 "Having traversed courses called Scotland and Ireland in previous bestsellers, Coyne covers even more ground in his latest." For a taste of this incredibly gifted writer's style, check out his features on Links Life and read on. "Coyne plays golf in all 50 states on a quest to determine the course that best exemplifies the game and the nation." The golfer and American Studies major in me is as excited about this book as all those in attendance at the 2021 Ryder Cup in Whistling Straits. USA! 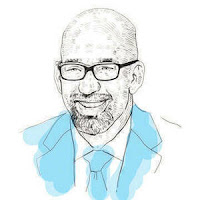 Domers in the News: Monty Williams '93
In case you weren't inspired by Williams already: "Phoenix Suns coach Monty Williams ’93 received the National Basketball Coaches Association’s 2021 Michael H. Goldberg Coach of the Year award. The honor, chosen by a vote of NBA coaches, recognizes success on the court and in community service. Williams led the Suns from a last-place finish in the Western Conference in 2019 to the No. 2 seed in the playoffs this year, an improvement over three seasons accomplished only twice before in the league in the previous 45 years. . ."

Does anyone else aspire to read your name in this section? Assuming for good reason, only! Maybe more in bold print and less so as a sketch?! Congratulations Coach!

In Conclusion
Fewer and fewer materials go to print each day, week and month. Unlike our ticket stubs, I hope ND Magazine remains accessible in the pulp...the flesh...the material world. Each issue is highlighted, dog-eared and well loved. I am grateful for the stories, poems, updates, Letters to the editor and the way that Sports and Spirituality is lived, celebrate and revealed. Until the Fall 2021 issue....

Photo Credits
All from ND Magazine
Posted by Anne Stricherz at 10:31 PM