Fellowship of Female Coaches and a Nod to Alyssa Nakken

When Alyssa Nakken was hired to the San Francisco Giants' coaching staff in January 2020, she became the first woman to hold a coaching position on an MLB team. While her official title is assistant coach, the former Sac State softball player has also had the opportunity to coach first base. In her role, she has focused on "high performance through, among other attributes, a deep sense of collaboration and team." Given the tremendous success of the 2021 squad, it's safe to say she's done something right. 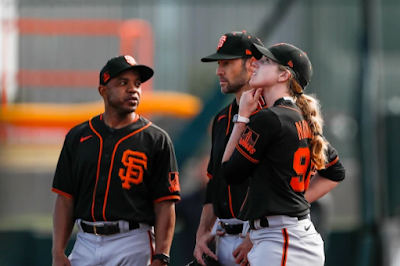 I respect and admire Alyssa Nakken. I would love to hear her perspective on the season. But, even with one of the most unique perspectives on the game, I wouldn't want Nakken's job. I don't envy her. Yes, the Giants won the National League West and set a new record with 107 wins, BUT Nakken works alone. I don't think I could do it.

To be fair, Nakken isn't completely solo. She is one of 13 coaches on Gabe Kapler's staff. She is often seen in and around batting practice. If you're wondering why you didn't see her more often, that might be because MLB teams are limited to seven coaches in the dugout. Regardless, Nakken is the only female coach in orange and black.

This season, MLB will had a record 23 female coaches in its lineup -- either on the field or in professional-development roles. This is good for baseball and it's good for women, but it still can't be easy. 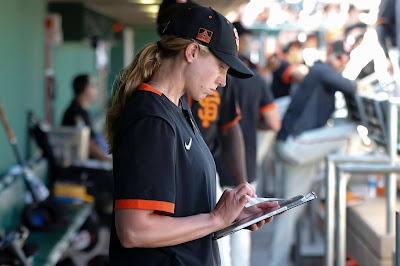 Coaching is incredibly demanding. The hours, energy and focus that it requires are unrelenting. The days are long but sometimes the nights are even longer. Just this year, I have laid awake in bed thinking through the struggles of many of the student athletes on my team. There comes a point in every season when the sleep deprivation and lack of exercise—not to mention the reminder I give to students that their essays will be returned by Easter—prompt me to consider Why I continue to do this... How I can continue to do this... and Should I?

These questions weigh on coaches. I don't like to complain. A lot of jobs are demanding, but these questions persist. They press. The are real. Fortunately, I found much more than the answers I was seeking. I found comfort, support, and mutual understanding from you guess it—other female coaches. While I do believe I share a bond with many coaches, especially those who work with athletes who play an individual sport as part of team, there is something very special about my female colleagues.

I believe that women carry things differently than men. Female coaches take on the challenge of their role and responsibilities in ways that only we understand. So, rather than give up or give in, complain or cry, I decided we needed to come together. Community.

The result was an evening gathering that I hope other Athletic Departments and teams will replicate: An Evening for In-Season Coaches.

I hope to organize this event for our winter and spring sport coaches. I didn't want my fellow female coaches to ride out the season, or worse—not come back next year. I was encouraged by the responses I got to the invitation and for this first gathering nine coaches gathered at the table for fellowship at a local Mexican restaurant. Yes, A certain popular beverage was available in pitchers. Chips and salsa too. We began with a prayer by Elizabeth Blue:

God grant me the insight to see the potential in every player; patience to encourage improvement; and character to always set a winning example.
May those I coach always see you in my life, and be brought closer to You through me.In your precious name, I pray. Amen 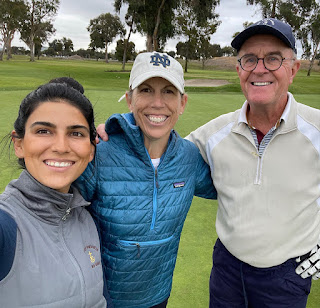 After informal introductions, we discussed the following questions.

I provided Some Events and Resources Worth Sharing:

The female coaches left the gathering feeling affirmed and recharged. Those questions we may have brought to the table found several answers. For me, one of the graces was just the realization that we are not alone.

I hope Alyssa Nakken won't be for long, either.... I say that both for her and for MLB. I would imagine she has found a sorority with and among those other female coaches and support from the Giants, her colleagues and more. GO Giants!