Jordan Spieth and His Caddy: Glad It Wasn't a Dream

I have a lot of stories, and I carry with me but a few good ones. One of my best was made known on one of my favorite sports days of the years: the final round of The Masters. 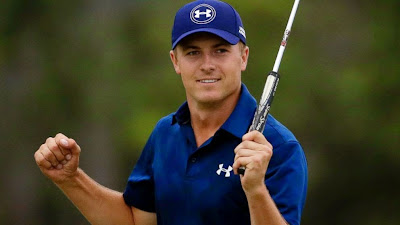 Perhaps you are one of thousands who have sought to learn all you can about the 21-year old champion Jordan Spieth in the 24 hours since his epic victory. I remember first reading about him two years ago thanks to Sports Illustrated's Sportsman of the Year Issue. Produced at the year's end, it includes a feature of "up and coming athletes."

The article, entitled "A Swing and a Hit" included a pronunciation key for his surname: "Spieth rhymes with teeth." I learned about his parents Shawn and Chris, respective athletes in their own right (baseball and basketball), as well as his younger brother Steven (who plays hoops at Brown) and his 14 year old sister, Ellie who has autism. "She keeps me grounded," said Spieth. A graduate of Dallas Jesuit, I immediately felt a kinship with this young face in American golf. But my story about Spieth comes from an unsuspecting source: his caddy.

I come from a family of teachers. My grandfather, sister, as well as too many of my uncles, aunts, cousins and I share a common profession. As educators, each one of us is familiar with what people always want to know: What do you do with your summers?! My cousin Amy and I have enjoyed plotting and strategizing how to have good ones. We discuss aiming for the right balance of activities, travel, down time, new hobbies, etc. We compare and contrast. However, I think her former co-worker figured that out best. 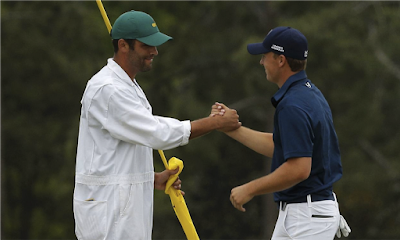 In the summer of 2013, Amy told me about her colleague Michael Greller; a fellow middle school teacher who caddied in the summers. He took a leave of absence from teaching in their school district to work with a young man who was going to play on the PGA tour. As written in "Why Masters Champion Jordan Spieth Hired a Former Teacher as His Caddie," Michael said he "had no aspirations of making caddying his profession. Among other things, Greller liked that it gave him a practical-world example to show the students. After caddying at  amateur tournaments, he would often bring his yardage book—which caddies use to calculate precise distances on the course—into class. "A lot of that is sixth-grade math," Greller said.

Greller first caddied for Spieth at the 2011 US Junior Amateur which was held hear Greller's home. A bond was created. In 2012, Greller caddied for him when he played in the US Open as an amateur. Spieth's 21st-place finish at the Olympic Club made him the top ranked amateur in the world.

When Spieth went pro, Mike decided he would break from teaching, continue caddying on the tour and see where things went. Mike wasn't offered another year for a leave of absence. With the support of his wife, he committed to full time work with Jordan Spieth. Fortunately for both men, in the summer of 2013, it was to the trophy stand at the John Deere Classic.

This past summer, I had the chance once again to spend time with Amy and talk about our June, July and August. I remembered the risk of her co-worker. I said "Amy who is that golfer your colleague caddies for." She said "Anne, it's Jordan Spieth." My jaw nearly dropped. I had just returned from Tokyo, Japan where the flagship store of Under Armour had been unveiled a few weeks prior. Who was the face of golf for this increasingly popular line of sportwear? Jordan Spieth. Who do people continue to tout as the future of American golf? Jordan Spieth. And who walked with Bubba Watson in the final pairing of the 2014 Masters? Jordan Spieth....and Michael Greller.

One of my favorite songs is "Badlands" by Bruce Springsteen. It's message is so poignant because it's hungry. And it's raw. The Boss sings:


Talk about a dream, try to make it real.
You wake up in the night, with a fear so real.
You spend your life waiting, for a moment that just don't come.Well, don't waste your time waiting.

We all have dreams. It's hard not to be inspired by real life examples of those who go after them.

Today, Jordan Spieth tweeted "Well, I'm glad it wasn't a dream." When Bubba Watson won The Masters for the first time in 2012, he said "I never got this far in my dreams." One of my favorite messages from the University of Notre Dame is "maybe the best dreams in life are the ones you never knew you had...that still come true."

Congratulations to Jordan Spieth, yes. But huge congratulations to Michael Greller for taking a risk. For doing things right. For letting the dream to come to you. I might not have been one you knew you had, but I will be calling you about summer work.

And ee you on your home course of Chambers Bay at the 2015 US Open! Thanks for a great story—one of my favorites.

Posted by Anne Stricherz at 9:47 PM