In her book "Help, Thanks, Wow: The Three Essential Prayers." Anne Lamott writes, "You've heard it said that when all else fails, follow instructions. So we breathe, try to slow down and pay attention, try to love and help God's other children, and—hardest of all, at least to me—learn to love our depressing, hilarious, mostly decent selves. We get thirsty people water, read to the very young and old, and listen to the sad. We pick up litter and try to leave the world a slightly better place for our stay here."

I think those instructions are important. We ought to teach them to our youth, model them ourselves and always strive to do a little better, a little more. But, as alluded to in Part I of this blog posting, I wonder why in some domains, picking up litter is a subjective norm. Athletic arenas are one such place. I was however, humbled and inspired by the Mt. Vernon (Washington) football team that decided this reality was to be the answer to an important question put forth by their coach Jay Silver. The full article, by Jason Haddix  is here.

Coach Silver asked “What are we doing beyond winning and losing that gives our community something to be proud of us so that they would want to come and watch us?”

While the question was posed to the players, Silver also pondered the potential answer. As he contemplated what direction to lead his players, he noticed trash being left behind on the Mt. Vernon campus and witnessed people just walking past.

When Silver shared his observations and the conversation he and the players had with his wife, Jamie suggested the team pick up the trash.
“What? You mean after games,” Silver said in response to her suggestion. “To be honest, I thought she was crazy for just suggesting it.”

The challenge was met and the post-game ritual was born.

I am always curious to know the post-game rituals a team employs. Popular traditions include lining up to shake hands with the opposing team, gathering for a team prayer and saluting home fans. Including “service” as part of that process something I had never seen. was new to me. As the Mt. Vernon Bulldogs learned, it was hard to think of creative ways to do so. No precedent had been set.

But the more I thought about it, I said “Why not?” Parents, siblings, teachers, classmates and the larger community give their time to support athletes. Why shouldn’t our athletes give back? And the beauty of this ritual is that, like many others, fans not only took notice, something in them changed too.

Haddix writes, As the Mt. Vernon fans began to take notice of what the players were doing, they began to self-police their own area, which was a welcomed outcome and reflects how a simple gesture can change a culture.

“We really don’t have to clean up our area where (our fans sit) home or away,” Silver said. “Parents and fans started cleaning that up on their own. As a way to help, they are cleaning up on their own before we get to it.”

Silver indicated it was not only the Friday night fans and players who were impacted. He witnessed the junior varsity, freshmen and even a Mt. Vernon youth football program going to the seating area and picking up trash after their games as well."

And what might be the best part of this story is that it serves as evidence that our programs are about much more than winning and losing. We say it so often—it is near cliché. Regardless, I truly believe the purpose of an athletics program, (especially in amidst a Catholic community) is transformation. This post-game ritual allowed for that.

The NFHS article states, “Picking up trash is not always the easiest. Silver recalled a heartbreaking road loss when the coaches didn’t say anything to the players about going into the stands. After the post-game speech, the coaching staff instead told the team to go to the locker room and change, then get to the bus.

But, the players’ agenda was a little different. 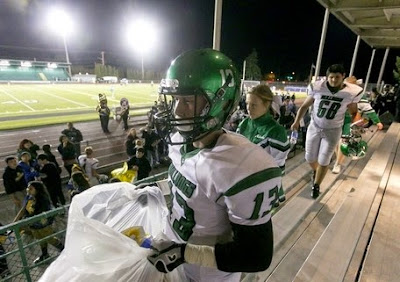 “The players always surprise you,” Silver said. “We talked for a minute as a coaching staff and when we turned around they were up (in the stands) doing it already without anybody telling them to.”

Indeed, service can be a postgame ritual. “For some players, picking up the garbage around the bleachers is about more than just cleanliness, it is about self-reflection."

“Going and taking care of the trash helped me reflect on the game, just kind of, ‘What are we here for?’” Mt. Vernon offensive lineman Josiah Nelson told The Everett (Washington) Daily Herald. “You realize there is another football game. I need to think about what I’m doing in this game and take of it in the next one.”

But this ritual became much, much more. Transformation was and never is limited to one student athlete or one team. In the act of service, parents, teachers, coaches and the larger community changed too.

And as the Mt. Vernon Bulldogs proved that can be at unlikely times, in unlikely ways.  It all just starts with a question…What are we doing beyond winning and losing? How are we serving others? How can we be great...!