Week 3 of Advent: Time to Rejoice...Even When We Don't Want To

We lit the third candle on the Advent wreath,  one that is a rose or pink color, because today is Gaudete Sunday.  Gaudete is Latin for "rejoice" and that is the theme of the Gospel readings.  In light of the tragedy that occurred in Newton, CT--another school shooting resulting in the senseless deaths of 26 people, the last thing I want to hear right now "rejoice."

Even if the tragedy at Sandy Hook Elementary school had never taken place, being told--no commanded--to rejoice seems odd.  Shouldn't the action of rejoicing be an act that comes from within?  Shouldn't it be a response to goodness, triumph and light?  Yes, it should but we humans are forgetful creatures.

When it's an easy time to rejoice, we often don't.  I know I often all that I have been given for granted.  In the midst of difficult times, it's even harder to rejoice.  But this Sunday of Advent tells us to look ahead.  Indeed, we need a reminder to take the long look.  It helps to hear this from another. Once again, enter in John the Baptist.

St. John the Baptist was a witness to one thing: Jesus the Christ.  He lived his life for one cause: Jesus, Emmanuel.  John tells us to rejoice because he knows what Christ will bring.  Jesus' name reveals His gift: He is the Prince of Peace.

Reminders to keep pace or keep a mindset are not foreign to me.  I ran varsity track all four years of high school.  My event was the 2-mile but as distance runners know, it's important to run both--one for speed and one for stamina.  Despite my preference, I had a better strategy for the mile--the four laps on the track were much easier to manage than eight long ones.  I share that same advice with my runners today.  They are fitting for the season of Advent.

The first lap is fast.  As runners get out of the gate, they are seeking to find their pace. The nervous energy carries you through the entire 400 meters.  The first week of Advent is no different.  When Advent begins, it's hard to believe we are in the race, the rush of Christmas time. 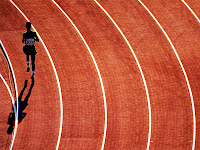 The second lap is challenging, but a runner still has their speed and strength at their side.  Although the initial adrenaline from the race's start has waned, this lap is one by which to keep focus.  A runner's placement is more determined as pace groups form.  The only place to look is ahead.  Self-talk is importnat: the race is still mine.  This week of Advent becomes every person's own challenge.  John the Baptist urges us to "prepare ye the way of the Lord."  How you do that and how I do that is different.  We each run our own race.

It is no great secret that the third lap requires the most focus.  The first 200m of that race is often considered "the forgotten leg."  Runners have just cleared the half way point.  Like this Sunday of Advent, it should be a time to rejoice! because the hard work is behind us.  Focus on the here and now.  One 200m leg at a time.  In Advent, that pink candle is a visual reminder, a sign of encouragement--there is but one week, one lap left. 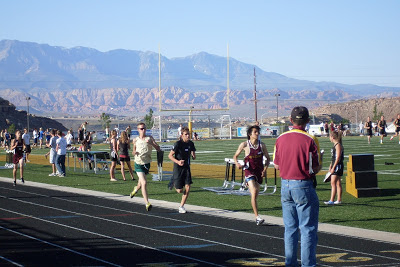 At the beginning of that fourth and final lap, the starter sounds a gun.  The shot tells the crowd and the competition that the final push is on.  Runners pick up the pace. The crowd looks in anticipation for the finish.  So often, it's as though that final week of Advent is a blur.  Our sights are set on December 25, but we cannot get there without the toil of the last leg.  Let the cheering carry you forward, but complete each step with heightened focus and intentionality.  It's needed, it's necessary.

As the pink candle burns this week, let us remember that forgotten leg...that call to rejoice....that reminder we are almost there.  The Prince of Peace will again be born into the world and into our hearts this Christmas.  Each and every age recognizes the need for His presence.  We feel it today more than ever.