What can I say about Heisman hopeful Manti Te’o that hasn’t already been said? Even the most devout ND fan will admit this team would not be 12-0 without him. His journey from Hawaii to South Bend and now from Notre Dame to Miami for the BCS title game has put him on a regional cover of Sports Illustrated and his team on the national cover for the first time since Sept. 30, 2002, (an issue that featured receiver Maurice Stovall after a win at Michigan State). The paradox of his season—tremendous personal loss amidst win after win, week after week is but a part of this story.  What is there to say about Manti Te’o (other than a pronunciation key—it’s man-tie).  It’s what NFL Hall of Fame Tight End Dave Casper said about him—he’s a living legend. 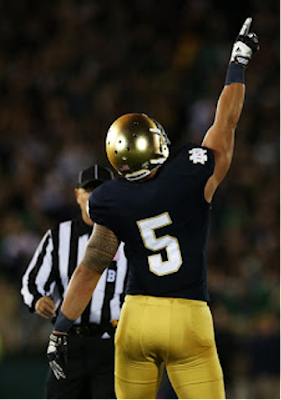 I attended a breakfast of past-presidents of the San Francisco Notre Dame AlumniClub. We met to discuss ways to keep alumni involved and increase outreach. But, it’s hard not to discuss Notre Dame football, especially when you have a team with an undefeated season. Casper, a member of the ’73 National Championship team that beat Alabama, joined this meeting/roast and said something I had not considered.  “The University hasn’t had an athlete this beloved by the students and alumni in years. He’s already a legend.” When a man who is a legend himself confers that to another player, it’s hard not to listen. 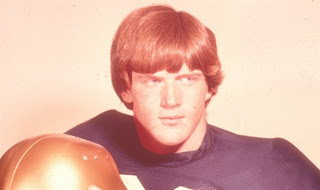 I was then reminded of what my friend Mike Caponigro ‘90, co-creator of the “Catholics vs. Convicts” T-shirt told me.   “Te’o might be my favorite player of all time.” At the time, I thought he was gushing.  And then I realized he wasn’t; nor are the hundreds of other people I have heard this from.

So what would I like to say about this living legend?

I love his spirit.  It’s hard not to when I read “if Te’o sees a student sitting alone at dinner, he’ll invite him to his table.”  At 6’2, 225 pounds, I’m not sure I would could “no” to such an invitation. And considering that he is now the most widely recognized student on campus I wouldn’t want to.  But this gesture is both so simple and so rare.  As a member of a school community, I know this happens too often.  Students sincerely and deeply appreciate the student who is able to extend hospitality to a stranger, who can make a peer feel included. 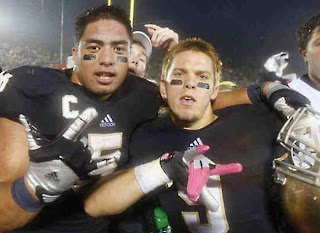 For Manti, this may be second nature.  He is also known for greeting everyone—cooks, walk-ons and dorm neighbors—by name, but I also have no doubt that same spirit has translated to the chemistry this team has on the field, yielding 12 wins.

I love his spirituality. Named after a warrior in The Book of Mormon, it’s no secret that Manti is committed to his faith—one that is fairly different than the traditional Catholic roots of Notre Dame.  Regardless, it’s hard not to be inspired by his deep love for God and comfort in speaking about what that relationship means to him. 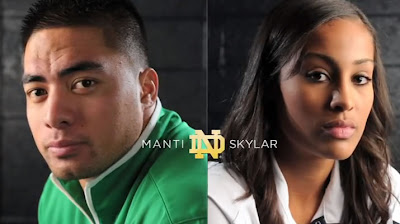 For one, it’s what brought him to Notre Dame.  In a recent interview entitled “Committed to Excellence: Manti and Skylar” Te’o told Kate Sullivan what it was about Notre Dame that made him choose it.   He said

To be honest, I had to pray about it. I grew up a USC fan—a die-hard USC fan.  All the way up to the day before signing day I was going to go to with USC.  But I sat down and I prayed about it.  Things just started to happen and everything started to point to ND.

I learned being young and from my parents that whenever you are looking for an answer to a question, and you ask the Lord—the hardest part is not praying, the hardest part is taking whatever answer He gives you…and going through with it.

Obviously going to Notre Dame wasn’t the answer I wanted but it was the answer that I was given. It was a leap of faith for me.  Now that I’m here, I’m with Skylar Diggins (there’s that spirit!) 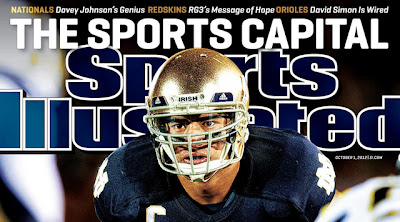 And that leap of faith proved to be a source of great comfort. As reported in “The Full Manti” “On September 12, three days before Notre Dame played Michigan State,  the parents of Fighting Irish linebacker Manti Te’o woke him up with a 7 a.m. phone call from Hawaii: His grandmother, 72-year old Annette Santiago had died of natural causes.  Six hours later, while standing at his locker, Te’o got a call from his girlfriend’s older brother, Koa, who sobbed, “she’s gone.”  At the age of 22, Lennay Kekua died of leukemia.   In response to the outpouring of love and support from Notre Dame, Manti mustered the strength to address his fans at the pep rally before the Michigan game (a week after the MSU game). He said

Four years ago, I made a decision to come here and I don’t really know why. Times like these I know why.  I love and each everyone of you and I can’t thank you enough for all the love.

For all the love you have shown me and my family. I would like to thank my brothers you see standing behind me—my coaches, and the man upstairs.

We don’t know His plan for all of us but I know one thing for sure: I know I will see them again.  I have faith and I find peace knowing I will spend the next life with them.  I love you guys. Go Irish

Notre Dame faithful are hoping that Saturday will be the first numerical change to “a sacred pairing.”  With 7 Heisman trophy winners and 11 national championships to its name, I will gladly switch 7-11 to 8-12.  And it’s fitting, because that’s just a small piece of what legends do—they make small changes seem big and big changes seem small.  They bring the joy to the “joyful anticipation” of this season.  They say “hello” and “I love you” with the same ease and sincerity.  Thank you Manti for being you.