We lit the first purple candle to recognize that the season of Advent has begun. The word Advent comes from Adventus, Latin for “to wait.” We know what we are waiting for—the Incarnation. God Made Flesh. Emmanuel.

Advent is also a season of hope. We wait in joyful expectation. As the season commences, I have been invited to consider What in my own life do I wait for with joyful anticipation? 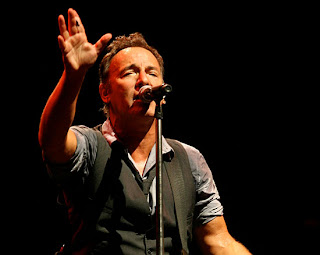 For Notre Dame and Alabama fans, it’s a National Championship game that will take place on January 7, 2013. For some, it’s the return of a family member who may serve overseas. My immediate answer is an event I had waited for but occurred on November 30—Bruce Springsteen and the E Street Band on the ‘Wrecking Ball Tour’ in Oakland, CA.
Tickets for this event went on sale on September 22. For this show, a gaggle of co-workers and I pursued General Admission tickets. I faced my first hurdle when I realized tickets sales began at 10:00 a.m. precisely when I am in class. However, I cleared this hurdle when my students gave me their full support to take a 5-minute break in order to make the on-line purchase. I said, “I can give you a reading assignment, but I have to be honest. Springsteen tickets go on sale in 30-minutes. Are you be ok with a break?” They appreciated I practice what I preach; it is an ethics class. When I broke through the Ticketmaster cryptic code to get GA tickets for everyone, victory was ours! 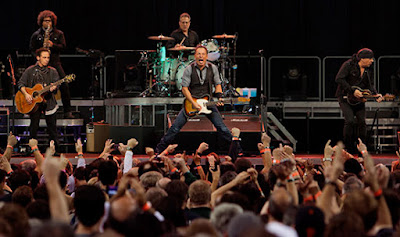 When the big day finally arrived, once again I waited in joyful anticipation.  One never knows what the Boss will bring to the stage.  In many ways he didn’t disappoint.  He played for over 3 hours, he deferred from the set list and called several audibles (I live to catch these!) and gave some guitar solos to deserving band members (most notably Nils Lofgren during “Because the Night”).  No doubt he earned his nickname “The hardest working man in show business.”

And yet, not much was different about this show than the 17 others I have attended….except one thing.  I shook his hand.  I stood next to the mid-floor riser and touched him several times.  When it came time for the Boss to crowd surf, he looked at the group I was standing with and me and said, “I need some strong women.”  The next thing I knew we were holding him up with our arms as he was lying down trying to make his way back to the stage.  It’s hard to believe he was able to continue singing “Hungry Heart” with hundreds of fans groping him in a group effort to move him forward. 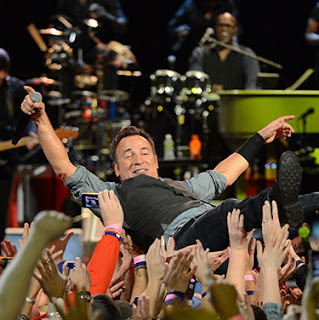 After a little “Human Touch” I realized I was shaking. It was overwhelming to connect “up close and personal” with a man who is an icon. Bruce Springsteen is a part of my life and to see so clearly that he’s a charismatic 63-year-old man was so simple…and forgive me, but so holy. I felt some sort of power in being connected to the source of the music, the center of the soul, the narrator of so many of my dreams and what I love in this life.
As I passed him forward, a thought crossed my mind: If I were this excited to touch Bruce Springsteen, how would I possibly feel about touching Jesus? It seemed like a major leap, a huge jump to connect those ideas until I realized—no, it’s not. This is what the Incarnation is all about. If we can’t let the real presence of those we respect, love, and admire move us, if we can’t see the glory in touching those who mean the most of us, how can we possibly get what Christmas is truly about? Emmanuel—God with us. 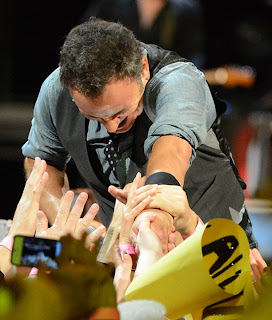 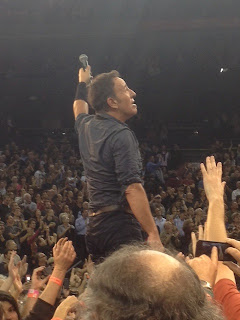 And my favorite part of teaching is what my students teach me. A colleague I love and respect—John, has brought his 14-year-old daughter to the last two concerts. He shared with our crew what her experience was like; I am grateful for what Georgina taught me. Gratitude—check.
He wrote, “She told me she cried when Bruce began the show. I asked why. She said she saw in people's faces how moved they were to be at the concert and how much they loved Bruce and his music.”
What the young and old, the faith-filled and the fallen see and experience in a Springsteen concert is undoubtedly spiritual. It has kick started my Advent—this season of joyful expectation to await THE Incarnation.
I believe it when we say “the created is a sign of the creator.” God’s greatness is in the power of incarnation as witnessed this past Friday.

Photo Credits
All photos, except the last one are from Backstreets
Posted by Anne Stricherz at 11:06 PM