My Drug of Choice: The Masters

In the back of my mind, I remember my grandfather watching a lot of golf on TV. Growing up, I could not understand how or why he did. What could be more boring than to watch individual men and women hit a 1.68” golf ball hundreds of yards? Today I stand before you as someone who spent nearly three days on my couch intravenously taking in the Masters. It’s as if Augusta National pumped some sedative through my television set, and fixed my attention to 18 holes a day. 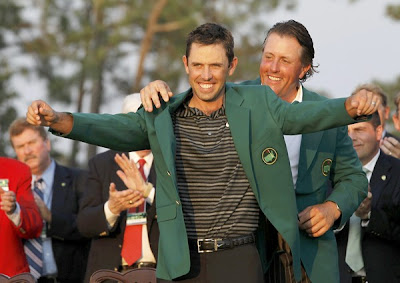 I am more of a “type A” personality than I want to admit. I do not watch one regular television program. In fact, I have not done so in four years. And yet, I logged in 15 hours with the first major of the year. So the question is obvious. What is so appealing about the Masters? Why is it my drug of choice?

My first response to this question is: ask anyone who feels the way I do. We are easy to find. On Monday, we were itching to talk to any and everyone at the water cooler about the rise and fall of Rory McIlroy, Tiger’s chase for the title and the beauty of seven men battling for the title on Sunday. Give us an inch…or a slight scent of preoccupation with it, and we’ll give you a yard. 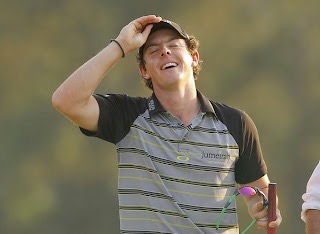 I love so many things about the Masters, but ultimately, what makes that tournament special is that we know the course so freaking well. There are laws with the Masters. You can't peak too early on Sunday. You can't miss momentum-swinging putts at Amen Corner. You can't lay up on 13; for whatever reason, it pisses off the Golf Gods. Your second shot on 18 has to land dead-even with the hole; it can't be too short or too long. It's the only course that feels like a living, breathing organism.

The TV camera flies over each hole before a featured player tees off and captures the beauty of this organism. No wonder we care.
When we realized it coincides with our spring break, we immediately gave one another a high-five. Our enthusiasm for “what could be” rivaled the enthusiasm of a player who just sank a great putt. Had we been standing up, I think there would have been a chest bump in the faculty workroom. This tourney does that to people; The Masters gods are crazy.

I love the Masters because it signifies that summer is right around the corner. The beauty of the course—azaleas in full bloom, the pure green that even the Irish could envy— shows that spring is making way for a season of warmer days and longer nights. This year, I added Augusta to the cities on my iPhone weather app. My jealousy towards those fans that walk the grounds turned to envy when I saw each day was in the mid-80s. Even the nights were warm. Sigh. 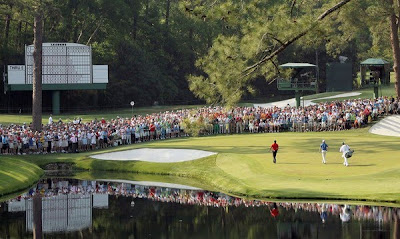 And yet, the greatest lure of the Masters is that it is crawling with tradition: the green jacket, the Champions Dinner Tuesday night where last year’s winner gets to set the menu..even the uniform white jumpsuits for caddies. And if there’s one thing that Catholics know, it’s tradition.
From time to time, it seems that tradition is all we’ve got. Catholic Theologian, Richard McBrien teaches that

Tradition refers to the whole process by which the Church “hands on” (literal meaning of the word tradition) its faith to each new generation--both the process of “handing on” the faith and that which has been handed on. Tradition (upper-case) includes Scripture, the essential doctrines of the Church, the Eucharist and other sacraments, and so forth. Tradition (lower case “t”) includes changeable customs, institutions, teachings and practices.

In a small way, I think the Masters offers both upper and lower case “t” for the sport of golf.

In a small way, I think the Masters offers both upper and lower case “t” for the sport of golf. Some true gentlemen and some elite athletes have “handed on” the game to who we see playing now—young players, so many of who are fit and conditioned. Many of the customs, teachings and practices have changed as needed and many haven’t. Even Augusta National, an institution in its own right, was slow to make a change for the better when it allowed its first African American member in 1990.

We should not preserve Tradition/tradition for the sake of keeping tradition. It has to have value and integrity. It binds people to those before and sets a place for those to come. That binding can be both positive and negative. It’s an interesting way to think about what might just be a wonderful way to spend a weekend, no?

In a small way, I love that what I am watching my Grandfather watched. I am sure he looked at it with the same wide eyes of appreciation. I even think of those friends and family members who I have shared couch space with over the years to view my favorite of the Majors. Thanks for the memories! For 361 days of the year, I am proud to say that I am drug free. For that fateful weekend in April, the tradition that is the Masters, however, is my drug of choice. I hope this tradition is “handed on” for generations to come.
Photo Credits Philly & Charl, Rory & Lone Tiger The great Arnold Palmer
Posted by Anne Stricherz at 11:33 PM

Email ThisBlogThis!Share to TwitterShare to FacebookShare to Pinterest
Labels: The Masters