The joy of a bye week means a few good things: a Saturday that's wide open and a little less stress. During the regular season, sports fans take one to three days to review the past game. Close to midweek however, it's time to turn your attention to the upcoming opponent. However when the schedule says bye, there is more time for reading about something other than your football team. I can't be the only person who feels this way... 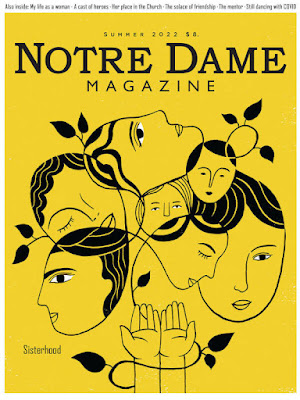 With a bye on October 1, I had a chance to read Notre Dame Magazine: Summer 2022 from front to back. Entitled "Sisterhood" it is an issue by and about women. It is is a fitting tribute to 50 years of co-education.

The Letter from the Editor: "A Woman's Point of View" begins with a story of Sports and Spirituality I have never heard. Kerry Temple '74, writes

I was in Lyons Hall on Thursday night, September 20, 1973 — one of 50 million Americans watching ABC on prime-time television — when Billie Jean King defeated Bobby Riggs in the “Battle of the Sexes” tennis match. Minutes later, hundreds of women marched across campus singing, “I am woman, hear me roar,” belting out with gusto the popular Helen Reddy song, “I Am Woman.” Our first-floor window was open, and we heard the proclamation: “I am strong, I am invincible, I am woman.” The eruption of defiant self-determination made an impression. It said so much.

I was a student during the mid-90s, a relatively peaceful, passive era. I never saw students march across campus as I heard they had—during the Vietnam era. This would have been a sight to see.

Stillpoint
The two photos in "Stillpoint" capture the spirit of Notre Dame, the spirt of sports. Here's how.

The caption beside Cashore's photo reads, "Having long dreamed of throwing a pass in Notre Dame Stadium, Archbishop Borys Gudziak hurled the pigskin toward the Cheering Class of 2022...The graduate who got the grab is Edie Uebelhor, a water polo player (first?!) and a chemical engineer from Encintas, CA.
I would love to see a stat on the number of commencement speakers at Notre Dame who make an overt reference to Sports...and of course Spirituality. Go Irish! 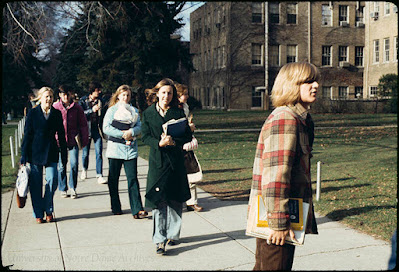 At 50 Years
This essay examines "a half-century after the start of co-education, how Notre Dame has changed—and not changed—for women." Each profile paints its own profile of progress, while recalling past (and present) pain and challenge.

The story of Molly Kinder '01, the first female member of the Irish Guard piqued my interest. The Irish Guard always have. I've been mesmerized ever since I first caught sight of that tall,  tartan clad, forward facing group—one that has now had several female members.

"Standing 6-foot-3, Kinder had met the Guard’s height requirement — since eliminated — and she passed the rigorous tryout." However, she was tested in many other ways.

As difficult as personal and institutional change can be, especially at a place like Notre Dame, I also hope she found she had her own champions and gracious support. 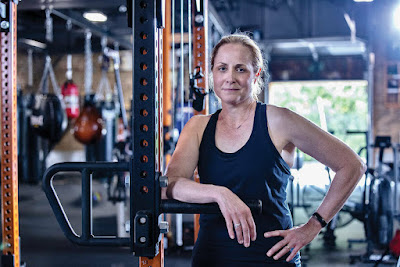 Who Do I Say I Am?
Maraya Steadman '89 puts a great twist on one of the Gospel's essential questions. This piece is about "a woman who has reached her middle years and confronts an age-old question." She weaves sport, spirituality and science into her story in such a way that when it comes to a close, my primary response/reaction was simple. "Thank you."

She writes "Descent is not a place I want to be." Therefore Steadman notes, "My first step was a pivot move away from my obvious choices: going back to work, volunteering or suffocating the daughter who is still at home by continuing to be a full-time, stay-at-home parent.  After the pivot, I took the shot. I don’t know if it went in or not; I may never know. I have no idea what will happen next, but I do know that “you will always miss 100 percent of the shots you never take.” This quote has been attributed to both Michael Jordan and Wayne Gretzky, so you can’t use it in a sophomore writing seminar. I know that not because I remember anything from my classes at Notre Dame, where I majored in accounting, but because I am now an undergraduate English major at a college close to my home in the Chicago suburbs. I tried to include a quote in a paper without citation — “Education will make you free.” My professor advised me to take it out."

My only challenge to Steadman is this: you *might* be among the minority. In my experience, accounting majors, engineers and bio-chem geniuses seem to quote their liberal arts teachers from ND as often as me. I am proud of my B.A. American Studies. I believe they got many of the benefits of a liberal arts education, too.

She's Got Game: Title IX gave women the right to compete on level playing fields. When given the chance, Notre Dame’s female athletes have soared.

This is a piece every Irish sports fan ought to read. The history, testimonials, and stats that have emerged from the implementation of Title IX are worth knowing and celebrating. Here are but a few that stood out to me!

Lesley Vesser writes "Those 37 words, signed into law by President Richard Nixon on June 23, 1972, changed American society. They created the explosion of girls’ and women’s sports that has taken female athletes at Notre Dame and other colleges and universities to national championships, the Olympics and professional careers."

She adds, "The road has not been easy. And yet, "Every female athlete today owes her gratitude to the women who overcame those obstacles, both on the court and in the courts." I agree. 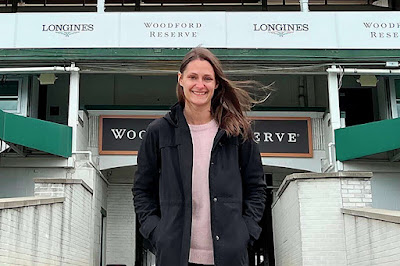 Domers in the News
ND Women are contributing on to the wide world of sports on the field, in the front office and in the production booth.

Lindsay Schanzer ’11. The NBC Sports producer has overseen the network’s coverage of horse racing’s other two jewels, the Preakness and the Belmont Stakes, and on May 7 became the first woman to lead a broadcast of the legendary Derby. “What’s really important to me is on this day we’re reaching an audience, many of whom never watched horse racing,” Schanzer told The Associated Press, “so it’s inviting them and also not alienating the audience that watches horse racing throughout the year.”

In Conclusion
Sports and Spirituality offer but two perspectives to reflect on our society. At Notre Dame, I daresay those points of view constitute "the blood in the bricks."

The Summer issue of Notre Dame Magazine: Sisterhood celebrates 50 years of co-education. I find Coach McGraw's quote to be a fitting way to think back on that milestone.

“I always struggle to find the perfect words to say how great Notre Dame is,” McGraw says. “I’m big on accountability. I demanded it from my players and myself. At Notre Dame, everybody makes a promise to do it the right way.”

We have and and we have not. This is a chronicle of success and failure and the effort to do it the right way...!