Another Lesson from Aaron Judge: Keep Your Eyes Up

At the conclusion of the HBO documentary, "Nine Innings from Ground Zero," former New York City major Rudy Guiliani states "It was something about baseball which is the American sport....it had a wonderful impact on the morale of the city. It's exactly what we needed to get our eyes up off the ground and looking up..." Pop flies, foul balls into the stands and home runs are but a few ways that the American past time gets us to look up. And thanks to Aaron Judge, America is doing it once again. 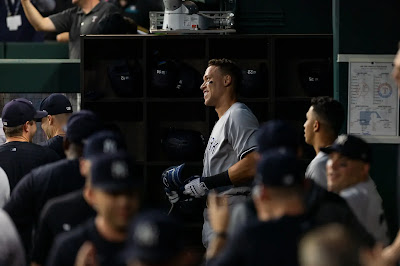 Every day I battle getting my sophomores to look up. While their eyes are not on the ground, they are fixed to their device. Although I do not allow cell phone usage inside my classroom, their eyes are rapidly moving from Tik Tok reel, to imessage, to their fantasy football standings and more. During class their iPads are to remain closed until instructed otherwise but as soon as they enter my classroom, they sit down and scroll what and where they can, until the bell rings. While not all students engage with their tech during this window of time, a good number do. That is, except for class on Wednesday, October 5. 2022.

When students walk into my classroom, the drop down screen (think of a small movie screen) highlights the agenda and that night's homework. While some teachers have a clever thought or quote of the day on their introductory slide, I usually have a photo or work of art related to the curriculum. However, after the Yankee slugger broke Roger Maris' record of 61 home runs in a single season the night before, I simply put the photo you see here on the screen. 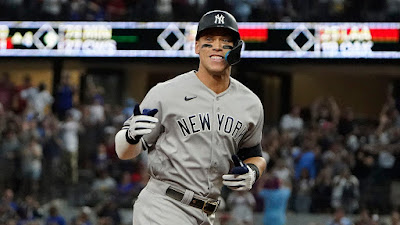 Students looked at it. Many even talked to someone sitting near them about it. These 15 year olds knew what this was about and many had their own opinions to share.

"Judge is so yoked. He should have that record."

"He said himself that he views Barry Bonds' 73 home runs as the number to beat!"

I let the conversation run its course. I wanted to hear what my students knew and had to say. I shared with them the article I had been reading about the man who caught the long ball.

As written in Aaron Judge’s 62nd home run ball is valued in the region of $1-2 million, experts say

Cory Youmans – sitting in left field with a front-row seat – was the lucky fan who caught the historic souvenir at Globe Life Field.

A Dallas resident and Texas Rangers fan, Youmans said he doesn’t know yet whether he’ll keep the ball, and after making the catch – an event that prompted euphoric celebrations – he was escorted from the section of seats by security.

Should Youmans sell the ball, he could be set for a handsome payday.

“In the last week or so, our colleagues at Memory Lane auction house have guaranteed to pay the person who catches the ball $2 million,” Bobby Livingston, Executive Vice President of RR Auction, told CNN. 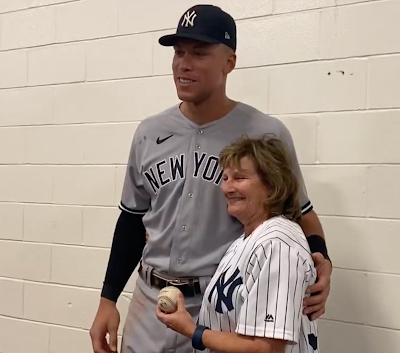 I added "I know that his eyes needed to be looking up in order to get that ball. Remember: keep your head up. Good things can come your way." I think there was an eye roll after that preaching.

Whether or not it is the most impressive record in all of sports, incredible feats like Judge's 62nd home run of the year do more than serve as a talking point. I believe transcendent moments create a space for us to be present to one another. This is not something I take for granted. There are ever more challenges to living in the moment, standing or sitting still and looking up. However, thanks to talent, desire, passion, and achievement we are drawn to something more. St. Irenaus said it best, "The glory of God is the human being fully alive."