Solidarity and the Same Path: A Short Story about Coach Casey Martin

It's 9:30 p.m. and I still haven't eaten dinner. The junior varsity baseball game went long; it was a full day. A stop at Chick-Fil-A was a must. Ever too trusting of technology and my navigation app, I arrived at some dead end street only to realize my empty stomach was another 10 minutes away from hearing Chick-Fil-A's signature soundbite. "My pleasure" was the furthest thing from reality as I saw that even my mobile order didn't go through. I was too tried to feel sorry for myself. Ever feel that way?

I navigated my way through the lengthy takeout line and opted to go inside. I waited 10 minutes for a simple sandwich. In that time, I looked over at the lone group of people at sitting at two tables: two men and a group of young adults—eating and talking with one another. A few minutes later, I looked at them again. After all, what else was there to do? God knows, I couldn't look at my phone anymore. 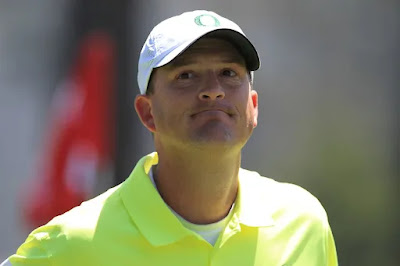 For whatever reason, something registered: the Oregon Ducks hat, the ever so slightly familiar face, the realization that the young men were wearing the same thing—black hoodies and pants with a green O. It was the University of Oregon men's golf team and their Coach Casey Martin.
Casey is one of my first and favorite subjects of the many Sports and Spirituality interviews I have conducted in 13 years time. After walking over to say hello and sharing a brief conversation, I thought to myself: sometimes, the universe throws you a bone.

Running into a golf team in a fast food restaurant probably doesn't mean a lot to most people, but in that time and in that space it did to me. It felt like I got a lucky break or as we say in golf, a member's bounce. In other words, this was good fortune. Thank you, Universe. However, this bone had some special sauce on it. Allow me to explain.

For one, I am also a golf coach. I can't tell you the number of times I have sat with my own team after traveling near and far for a meal in Chick-Fil-A, In and Out Burger, etc. I don't know a coach in America that hasn't at some time, in some place done the same. It doesn't matter if you coach on the Division 1, Varsity, JV, freshman or youth sports level, this scenario is the no different. And the moral of that story is that solidarity is not to be underestimated. To see others doing what you do, and to know that another person gets it, speaks volumes. Furthermore, writing, following and teaching about athletes and coaches changes you... and your sense of fandom. Over time, it is as if the subject of my articles and lesson plans become friends, mentors and spiritual heroes. It exciting to encounter these people in real time, but it's also challenging. You feel like you know them when you don't. You want to share what young people think and say, but not sure you should. There is a natural imbalance and I always want to mind and bridge the gap. In light of this disparity, I know some writers and teachers just leave others alone. Sometimes I do, other times I do not. I've always thought the best thing to do is say "thank you." In this case, I wanted to say that and more.

Since my interview for Hopekeepers magazine, Casey helped the Ducks capture a national championship. He qualified for the 2012 US Open at the Olympic Club, my home course. And less than six months ago, he had a surgery to amputate his right leg. As written in Golf Digest, "His right leg, or his trail leg as he’s known it in his life as a golfer, was amputated above the knee in a three-and-a-half-hour surgery the afternoon of Oct. 15. That infamous leg afflicted with a circulatory disorder since birth, that won a national championship alongside Notah Begay at Stanford in 1994, that made the Supreme Court debate the essence of competitive golf, that made Jack Nicklaus reluctantly testify against carts, that qualified for two U.S. Opens, that sometimes made him cry getting in and out of the shower, will bother no one anymore." I thought he looked great; I hope his health is strong. Pretty remarkable—I thought to myself. But what do I know?

Well, I know that the Oregon golf team arrived into the Bay Area to play in "The Goodwin" a tournament at Casey's alma mater—Stanford University. I know that getting athletes who play an individual sport to think and work like a team is not easy. I wish I had asked Casey for some tips. And most importantly, I know that it's worth it to reach out to those coaches and athletes we care about when we can. If only for the fact it makes hard work a little lighter and those long days a little more interesting. Sometimes we come to them, sometimes they come to us. Other times, the good Lord puts all of us on the same path.