On March 11, 2022 the Olympic Club hosted award winning and New York Times best selling  author Tom Coyne for a fireside chat. Tom is on a book tour promoting his fifth book A Course Called America: Fifty States, Five Thousand Fairways, and the Search for the Great American Golf Course. I still feel nourished by the stories that he shared. I am amazed that something so simple, was so special. To make this fireside chat go, we didn't even need a fire! The gathering required three microphones, two chairs, and one set of questions. What we got was a bevy of answers, a whole lot of input from the audience, hundreds of stories and just as many laughs.

I met Tom my senior year of college. One of my closest friends was a very serious, erudite English major. They had several classes together and his contributions in class made an impression. This should be of no surprise whatsoever. For example, in his Links Life Episode #2 Whistling Straits, Tom stands in the tee box on hole 12… a par three looking down upon what is a diabolical pin placement. Lake Michigan, or is it an ocean(?!) is on the right. He places his golf ball down, gets ready to take a practice swing and says, “What a pin! Who set these pins—Nero? Caligula?” In case you're unfamiliar with these Roman Emperors, let's say Putin might be a friend. Nero killed his own mother.  The questions I raise in the tee box are different. Just the other day, I said, "I really like those pants, what brand are they?" or "Is that KC over on 12?"

A big part of college life at Notre Dame includes dances hosted by each dorm,…I think my parents called them mixers, we called them SYRs, short for Screw Your Roommate. I’m sure there is some benign and appropriate name for them now. Karen did the setting up. She said. "I think you will really like Tom—his wit and persona, he’s great…." I thought so and so did everyone else in our group. Literally. To this day, my friend John still talks about that dance, and it's not because of me or because of his date, it's because it was an evening with Tom.So imagine my excitement to host Mr. Coyne, all grown up now, red hair still in tact. A husband and father he is only slightly weathered, well traveled, wise, witty and truly one in a million.

Paul O'Driscoll—President of the Olympic Club served as moderator for the evening. I'm not sure a better one could be found. Why? For one, Paul has never met a stranger. His gregarious, affable, warm and quick nature puts any guest at ease. Second, Paul hails from Co. Cork, Ireland. Walking the perimeter of Ireland with golf clubs on his back to play over 50 golf courses, has given Tom a rich, deep understanding and appreciation of the Emerald Isle and its people. They were indeed kindred spirits.

Paul lobbed the first question. With this lovely brogue he invited Tom to tell us what A Course Called America is about. Tom admitted that he knew golf in Ireland and Scotland, but not in our country. This was in no way a humble brag or a sobering realization. Instead, he recognized it as an opportunity which he paired with an essential question. The product is what he predicts to be the final text in a terrific trilogy.

No spoiler alert necessary, Tom affirmed that he did find the great American golf course. And, he let us in on what he learned that might be even more important: our country is comprised of great people. Because we are nation divided—it's hard to believe we are states united. Sadly, this truth might not seem self evident. While the American Studies major in me could have told him he didn't need to play over 200 golf courses to learn that, I'm glad he did, for what follows are profiles and portraits of these Americans and the places they call home.

Paul asked him the biggest surprise and the biggest let down. Congratulations Minnesota! Sorry Arizona.

When asked to choose between Irish/British Isle golf and what we have here in America, Tom gave a nod to what is across the pond. In no way did his answer surprise me, for in several episodes of Links Life and infrequently in his writing, Tom states that this country has it backwards. The best courses in the US are very exclusive; too many people pride themselves on their ability to access what most people cannot. In Scotland, the best courses have memberships, but also offer times that are open to the public. Accessibility is the (other) name of the game. Why can't we do the same? Good question.

Tom reminded us that quite often the best part of traveling is planning for it. These words were serendipitous to my ears. I am taking a 12 day trip to Ireland this July with a group of women from the Olympic Club. The earliest part of planning this sojourn included  an enticing invitation to the crew that included a video featuring No Laying Up and none other than Tom Coyne. Amazing.

The evening concluded with questions about caddies. Tom was a caddie at Rolling Green Country Club—providing experiences which would characterize and color the truth behind the fiction featured in his first novel, "A Gentleman's Game." Tom believes the best story tellers are caddies. I told him Plato believed "those who tell stories rule the world," which led me to wonder how many people in leadership worked as caddies.

Tom might be one of the best story tellers I have heard. Granted, I love the subject of his stories: America, Ireland, golf, encounter, and more. But I realized that the questions and answer he asks at the introduction of his Links Life series are on point. He asks:

Is golf a game? A lifestyle? An obsession?
My name is Tom Coyne and for me, golf is connection
It’s a connection with nature, places but most of all with people.
I’ve traveled the world with some crazy golf adventures and everywhere I go, I find people whose lives revolve around this little white ball, because this isn’t just a game.... 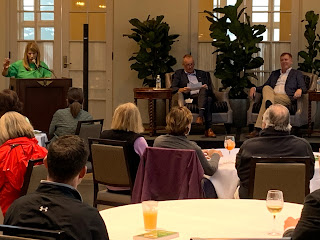 Thank you, Tom for visiting and sharing your stories around the proverbial fire with us. Go Irish!

Posted by Anne Stricherz at 8:57 AM