Friendships From Sports: Another Jewel of Life

The words of  Jessie Owens resonate with my life's story. The four-time 1936 Olympic champion said, "Friendships born on the field of athletic strife are the real gold of competition. Awards become corroded, friends gather no dust."

I met two of my closest friends on the Carondelet High School tennis team. One was my favorite doubles partner and the other came back from a 7-0 deficit to beat me during freshman year tryouts, 9-7 in the 8-game pro-set. I haven't played tennis with or against either of these women in over 25 years, and yet their friendship means more to me than ever. 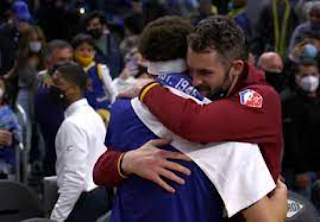 I continue to make friends—new ones, good ones, even wild ones through sports. The game of golf has introduced me to women and men, young and old from a variety of backgrounds, careers and much more. Truly, my life is so much richer because of the time we spend together playing what is much more than "just a game."  Indeed, through the shared pursuit of something challenging, competitive. and fun that those relationships are strengthened and sustained. Sport really is the gift that keeps on giving.

I love the fact professional sports celebrates the friendships that are born from being teammates. For example, the long waited return of Klay Thompson (941 days to be exact) wasn't the only story that caught the media's attention. Prior to tip-off, this Splash Brother was greeted with a hug by his little league teammate, Kevin Love. As written on SFGate

The intertwining paths of Klay Thompson and Kevin Love trace back to a baseball field in a Portland, Ore., suburb.

Long before the NBA All-Stars faced each other on their current sport’s biggest stage, they shared a Little League team. Thompson was the speedy leadoff hitter, Love the hard-throwing pitcher. Even then, while playing a sport that won’t figure in their legacy, the preteens recognized in one another the potential for greatness.

But a few hours earlier, the highest profile position for the Rams was working to secure another victory for a Los Angeles team. Matt Stafford, the team's quarterback grew up with a man who knows what those expectations and that pressure feels like. The Dodgers long time ace, Clayton Kershaw has called Stafford a teammate and friend since they were six years old.

In fact, as written in The Bleacher Report

They played on the same youth soccer, baseball, football and basketball teams together. They played freshmen football and two years of varsity baseball together and both graduated from Highland Park High School in 2006 after dominant final seasons. Kershaw compiled a 13-0 record with an ERA of 0.77. In a five-inning mercy-rule game, he struck out all 15 batters.

These two examples, on one of the more exciting sports Sundays, got me thinking about other friendships born from youth or high school sports. I know that many collegiate and professional athletes consider their teammates to be like friends and in some cases, like family. But what of those born from those formative years. 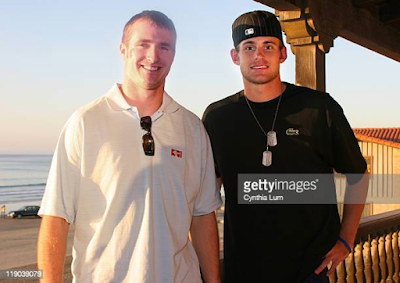 Andy Roddick and Drew Brees both are long time friends and former teammates. As written by the 2003 US Open Champion:

“Yes Drew Brees beat me in tennis when I was 9 and he was 11. Twice,” Roddick wrote on Twitter back in 2014. “I finally beat him and he quit tennis. You’re welcome football.”

What other former teammates/friends come to mind?

Reflecting upon these types of connections, got me thinking. Can you name two women that became friends through sport? I could not.  The first example that came to mind was Venus and Serena Williams. I gave myself a half point of credit, as they siblings. However, I genuinely think the two sisters—born just 15 months apart—have an affection for one another that is akin to the best of friends. Please share names of female athletes if you know any. They ought to be publicized too! 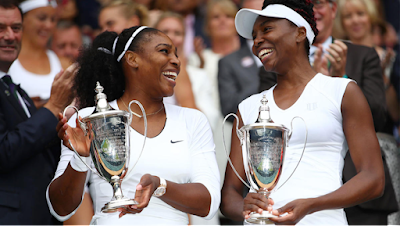 And while we are at it—what about male and female friendships. I knew that Jerian Grant and Jewell Lloyd became friends at the University of Notre Dame thanks to shared space. In the time between the men's and women's practices, the two would shoot around and engage in a friendly, yet competitive game of H.O.R.S.E.  All-Americans, Player of the year candidates, and now...friends. Go IRISH.

I believe every person should have a number of quotes, prayers and mottos memorized by heart. One of mine is by the late author and activist, Elie Wiesel. He wrote "friends are the jewel of life." Thank you sports, for bringing many jewels, many colors, shapes and sizes. Shine brightly.

Posted by Anne Stricherz at 9:00 AM