I would like to thank the Sports Information director at Notre Dame for writing my Case for Connaughton. One can't even get to his stats —the breakdown of his freshman through senior seasons (you can read that again: a four-year collegiate basketball player still exists in the NBA!) without wading through a robust list of his accomplishments as a player and teammate.

I don't know that even Irish hoops fans are fully aware of the incredible contribution Pat has made. I'll let the information from his Bio on Notre Dame's Men's basketball speak for itself.

One of the greatest leaders in the history of the Notre Dame men’s basketball program … two-time Notre Dame captain and one of 22 players in program history to serve in that role in multiple seasons … played in more games (139) than any other Fighting Irish player … started 123 career games to rank third all-time in that category … made 120 consecutive starts during his career as one of three players in Notre Dame history to make 100-plus consecutive starts … concluded his career as the eighth Fighting Irish player with better than 1,400 points and 800 rebounds … finished 16th and eighth, respectively, on school’s all-time career scoring and rebounding lists … owned career averages of 10.5 ppg. (1465 points) and 5.9 rpg. (823 rebounds) … scored in double figures 74 times during his career and netted 20-plus points on 11 occasions … grabbed 10-plus rebounds in 20 career outings and registered 16 career double-doubles … led the Irish in scoring and rebounding 19 and 41 times, respectively … also led Notre Dame in blocks on 32 occasions during his career … fifth all-time in career three-point field goals made (268) … 41st pick overall (second round) in the 2015 National Basketball Association draft by the Brooklyn Nets and was subsequently traded to the Portland Trailblazers.

The play-by-play case for Connaughton is self evident. I would like to add a bit of color commentary for why I could potentially cheer for this member of the ND family in the Suns v. Bucks NBA Finals. 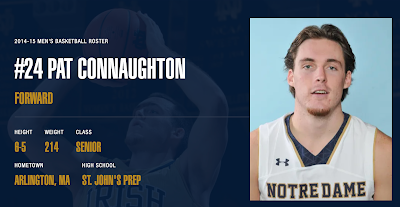 Speaking of family, Patrick Bergin Connaughton is the first cousin of my friend Erin nee Bergin Earnst. Pat's mom and her dad are siblings. I learned of this family connection early in his time at ND. I loved following his success because it proved to be a fun way to stay in touch with Erin over the years. His success = Irish success = Bergin pride. I can't imagine how her kids must have felt, having a cousin in the NBA. I personally couldn't handle it; I am convinced I would tell anyone with ears to listen.

Instead I am running with this one: my mother's maiden name is Naughton. In the same way that I feel a connection with Steve Stricker (different spelling) I feel one with Pat. I like to think we hail from the same clan...or it's safe to say I want to think we are. Go 24!!! 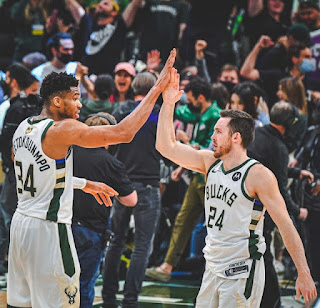 Most importantly, as a player and teammate Pat has a singular quality that speaks volumes. Although he was as starter in college, Pat has spent most of his six years in the NBA as a reserve guard. He rarely starts; last season with the Bucks he averaged 22.8 minutes per game. Regardless, I encourage you to watch Pat on the sidelines. Notice him on the bench. It's not hard. Pat is the first to stand up and clap for a great play or outstanding bucket. When a time out is called, he's first to rally toward the huddle. He always goes out of his way to give his teammates high fives, to shake hands with other players after the game, etc. His body language is incredibly positive, his engagement is exceptional.  I don't know that a person can coach a player to be like this, but I think you can and should point to the example. Here's a great one. If my class or my team had but two Pat Connaughtons, relationships just might flourish. Records might be broken... Who knows. 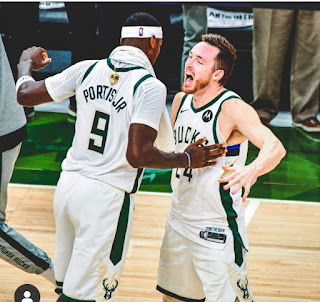 Irish fans know that Pat was also drafted by the Baltimore Oriole's to pitch but I wouldn't hold my breath. The average NBA career is 4.5 years and he's already six years deep. Pat's adept basketball IQ and EQ, his positive presence and the contributions he is making right now are more than keeping him in the game. Hopefully his efforts are bearing fruit that will lead to two more wins against Phoenix and a championship for Milwaukee.

I would like Pat to know how much I have enjoyed following his career and how he has represented our alma mater. I would love to sit in on a conversation between him and Coach Williams. Go Irish.

Photo Credits
Bio Page
with the Bucks: @ndmbb
Posted by Anne Stricherz at 9:27 AM