According to Fighting Irish media, Lee Kiefer is "Arguably one of the most accomplished student-athletes in Notre Dame history.  Lee Kiefer is a two-time Olympian, four-time NCAA national champion, and the first U.S. women’s fencer to earn a No. 1 world ranking. This is her story." As the first American—male or female—to win an Olympic Gold Medal, I don't know there is much to argue. In Kiefer, we have an answer. 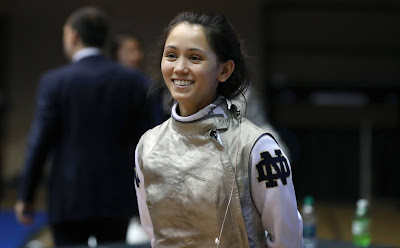 I encountered her story in 2017, thanks to the video about her (I recommend you watch it now). The opening line speaks the language of Sports and Spirituality.

Even in that moment, with Lee standing mysteriously behind a cage of a face mask, leaping with a sword in her hand, the conflict reveals a truth. There is beauty in the sport. This dissonance does not last for long. She adds "and it is violent. Strategy is crucial. At times it is patient and other times it is wild." She had me at beautiful, but now I really want to know more. I enjoyed every minute of it and have shown it in my class every semester since. My students feel the same way; I hope you do too.

Thus, the purpose of this post is to share her story and the questions it has inspired. Enjoy.

Why Fencing?
Lee's father, Steve Kiefer shares why he was drawn to fencing. A club sport at Duke University, he said "fencing to me was exotic.  As a club sport, it just sounded intriguing and kind of fascinating."

His testimony resonates with mine. A club sport at Notre Dame, I felt the same way about crew. In high school, I saw what must have been a 30-second clip of students rowing in the movie "Dead Poets Society." It was fascinating. I was intrigued. Like many college kids, I tried out for crew in the fall of my freshman year. I rowed all four years.

Lee's story is different. Her father obviously exposed her and her siblings to fencing early on. I would like to know if she also found it exotic, intriguing and fascinating as a child. And, does she still feel that way?

Why Fence?
I would love to learn more about the virtues of fencing. What does an athlete gain mentally and physically, socially and spiritually by participation in the sport. Also, I am interested in knowing from fencers: How do you think about the world because you fence? In other words, how does fencing shape your vision?

What I know about fencing is limited to what I learned through her story and what my former students who fence have shared with me. As an undergrad, I didn't know any fencers. Though I remember seeing the set up for fencing bouts (that's the official word for their match/game) inside the JACC, I have never attended an actual competition. I wonder how many students attend today?

Fencing often attracts a certain type of student athlete. Fencers are high achieving, self disciplined, type A personalities. Though they should never be reduced to a certain stereotypic, I've worked with enough teams in athletics to know that certain characteristics emerge.

I have heard the off-color remarks that young people use fencing to get into outstanding colleges, the Ivy League. While this may be true for some, at some point, every fencer must reconcile for him or herself why they engage. Why fence? I'd like to know. 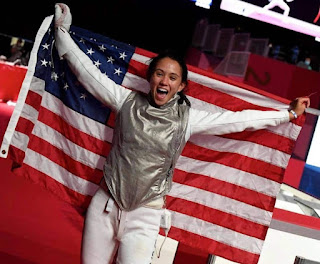 Fencing and Fun
Lee admits that bouts get sweaty and can be fun. How?

I ask this question as a person who plays a sport that a lot of people disregard as fun. Golf is tough and it's slow. The number of people who reduce it to chasing a 1.68" white ball over hundreds of yards, all the while hoping that you don't lose it looms large. But, I can explain to you exactly why golf is fun. I am certain Lee can do the same. And it must be fun, because she has given so much of her life and time to it.

Creativity
Lee's coach, Gia Kvaratskhelia lauds her creativity. In fact, it underscores his claim that she is the greatest Notre Dame athlete of all time, in part, because of it.

In every sport, the greats are creative. Wayne Gretzsky, the Williams sisters, Michael Jordan. What does creativity look like in fencing? What does it feel like? sound like? I'd love to learn.

Fun Facts
Lee Kiefer should not be reduced to bunch of fun facts. Her success is worth celebrating and sharing. She has much to teach about excellence and that noble pursuit. And yet, it's hard not to pass on some of her stats as noteworthy "fun facts." Thanks to Jim Small, here are but a few:

America has won only three Olympic Gold Medals in history in Fencing -- and all three have been won by former Notre Dame student-athletes!

Also, Lee's husband, Gerek Meinhardt '13 is currently ranked #2 in the world in Foil. He competed in the Olympic games on Sunday, July 25. It makes sense that she would marry a fencer. Growing up with two siblings who competed in the sport, it's a family affair. Those must be some good bouts. 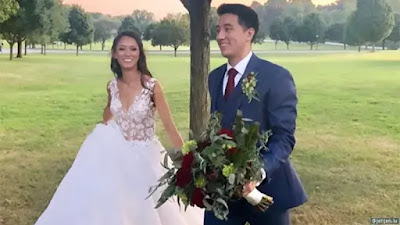 Beyond the I in Team
I love that Lee grew to become more confident and caring after competing for four years on the fencing team at Notre Dame. It can be quite challenging to build a team when your athletes compete individually. With her early success, she could have constantly and consistently played by her rules. But from her teammates' testimony to the tears she can't hold back at the conclusion of the interview, it's obvious there wasn't a huge I in this team.