What We Can Learn from US Olympian Jessica Springsteen

I have yet to watch much of the Tokyo Olympics, but I will certainly be tuning in today to watch the Boss' daughter, Jessica Springsteen compete in Equestrian. Ranked number fourteen in the world, Jessica Rae is the middle child of Rock n Roll Hall of Fame singer and songwriters Miss Patti Scialfa and Bruce Springsteen. She is also the youngest of the four members of the United States Equestrian team. Thanks to Jess, I have learned that Equestrian is the only Olympic event which involves animals and in which men and women compete together. With every sport, I seek to celebrate its virtues. Jess has certainly brought those to the spotlight. 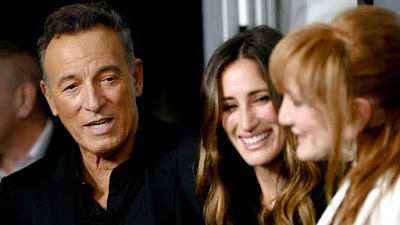 Think what you will of Springsteen's success in horse riding. Yes, the sport defies financial accessibility. I'm sure there are those who believe that her parents' power and privilege has put her in a perched place, one that points to Olympic glory, but her story intrigues me. I am not that familiar with horses. I know but a few people who ride. So what gives?

Fortunately, I figured out why: I have been told that our parents influence us more than we will ever know. To hear Jessica talk about her sport serves as a poignant reminder of that power of parental example.

I have a program from the 1984-1985 Born in the USA concert tour that stands proudly in my room. It features each member of the E Street band with a full page photo and biographical information including: full name, nickname, height, weight, birthdate, instruments played, first band, secret ambition, favorite color, favorite food and what do you like to do on a date. Bruce Frederick Springsteen's nickname is "The Hardest Working Man in Show Biz." Attend but one of his concerts, and you will the moniker as self-evident. 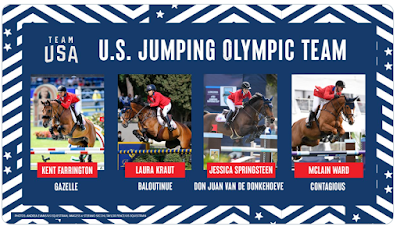 In order to make an Olympic team, one must become "the hardest working man or woman" in their sport. I can only guess Jessica saw that work ethic in her father...and in her mother who has been with the band since before she was born. The Boss has continued to sing, write music, write a book, perform worldwide, perform on Broadway, create a podcast in that time.

The Duke University graduate saw not only the hard work but the passion that fuels the fire. "They [Bruce and Patti] obviously found their passion when they were younger with music, and they recognize how hard it is," Jessica told the Robb Report. "Some people go through their entire life without finding something that they really love, so they just kind of really pushed me. They know that you just have to keep going. And they've really instilled that in me."

Jessica's passion—her Olympic dream— is now a reality. According to the Town&Country article Bruce Springsteen’s Daughter Jessica Joins the U.S. Olympic Equestrian Team, "The professional rider also gave some insight into her extensive training routine, which included strengthening her legs and core. But, she noted, there's no substitute for riding itself. She said, "The best way to keep yourself sharp and to stay in shape for show jumping is to constantly ride." Springsteen started riding at the age of four.

Jessica traveled with the team to London in 2012, but she didn't get a chance to compete. She then took the 2014 American Gold Cup and won her first five-star event in 2016, but it wasn't enough to make the cut for the Rio Games.

Over the five years between Rio 2016 and the delayed Tokyo Olympics, she progressed up the ranks and started working with her current horse in 2019. The pairing put her in the Olympic radar when it helped the U.S. jumping team win the FEI Jumping Nations Cup USA in 2020. She would add her own individual victory in the K 4* Grand Prix Hubside Jumping Tour event June 13 in France. 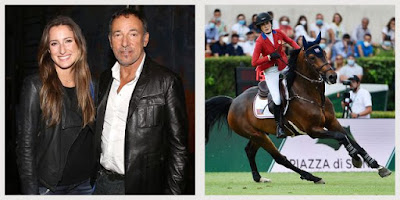 Equestrian comprises three disciplines: Dressage, Eventing and Jumping—with men and women competing on equal terms. Springsteen will be representing the US in Individual Jumping with her horse Don Juan van de Donkhoeve.

In every interview I have seen, I have found her to be incredibly engaging. A self-described introvert, she smiles easily and defers to the wisdom and expertise of her teammates. I find her to be a wonderful representative of our country in these Olympic games and hey...all this makes a for a great story, too. I think her parents deserve *some* credit in all of this.

In 1990, the Boss wrote the song "Living Proof" following the birth of his first child, his son—Evan. To my knowledge, he has not written a song in honor of his daughter. Perhaps HER example at the Tokyo Olympics will prompt that.