This is Success: AMDG


To laugh often and much; to win the respect of the intelligent people and the affection of children; to earn the appreciation of honest critics and endure the betrayal of false friends; to appreciate beauty; to find the best in others; to leave the world a bit better whether by a healthy child, a garden patch, or a redeemed social condition; to know that one life has breathed easier because you lived here.This is to have succeeded.

I'm sure Emerson's poignant words grace many a graduation card; they should. With the conclusion of another school year and 375 new alumni of St. Ignatius College Prep, it's only natural to look back on the success of the past year....of those we shaped and formed...those who have left their mark and those we will miss. 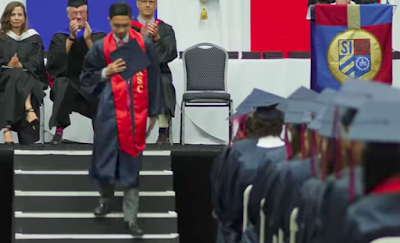 At SI, like many Jesuit schools throughout the country we have a paradigm of success in a the Grad at Grad. This profile identifies what a graduate of our schools ought to be. There are areas of strength and always room for growth, but our mission is to educate the young men and women who enter the hallways at 2001 37th Avenue into the Sunset and shape them into men and women for and with others. They ought to be Open to Growth, Loving, Intellectual, Called to Leadership, Religious and Committed to Justice. These tenets remind us who we are. To be more direct, one could say they justify the cost of tuition. I like to think they are our raison d'étre.

In the past month, I have witnessed what we proclaim. In other words, I know we have succeeded. Here are but two examples.

At graduation, the administration confers the four highest honors in the school: the Loyalty Award, the Anthony P Sauer, SJ Award, the Valedictorian and the Ignatian Award. As written on the SI website,

The Ignatian Award is the highest award our school offers. It is conferred upon the graduating senior who has consistently put the welfare of students above his or her own interests. This award winner is chosen from the graduating class for generous service on their behalf, dedication to the Gospel message, and devotion to the Christian ideals enunciated by the patron of our school, St. Ignatius of Loyola. 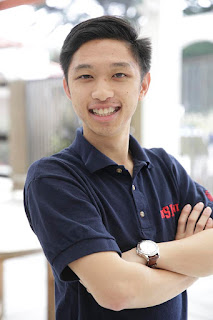 This year's recipient is a humble leader and genuine role model for classmates and teammates. An honors student who consistently strives to do his personal best to develop intellectually, emotionally, and spiritually; this student has been a retreat leader, a leader on Student Council and an Eagle Scout.

What sets him a part are his distinct passions which he has managed to develop and share these past four years. He has been on SITV, served as a Big Cat, and as a Kairos Retreat leader; he ran Cross Country, performed in the musical, and was in Speech and Debate. This young man's talents are many and varied because of his insatiable quest to discover and master new opportunities. He was a founding member and leader of our Robotics Team, a member of the California Scholarship Federation, and a regular at daily Mass in Jensen Chapel and still found time to complete over 897 hours of community service.

He is a young man blessed with many gifts – he is intelligent, morally upright, and full of integrity; he is a leader and has touched our hearts and challenged our minds the past four years. His good-natured, outgoing, and winning personality, positive approach to life and learning, and genuine concern for those around him have earned him the respect, trust, and admiration of both his teachers and peers.

Fr. President, ladies and gentlemen, it is a pleasure to present the 2017 Ignatian Award to Nathaniel Dejan.

Nathan who served as senior class president is known to his friends and even his teachers as "Sunny D." His disposition and personal demeanor is one of joy....yes, real joy. He is kind and positive and lives life differently. I have to believe his faith has something to do with it.

A memory I will forever treasure of Nathan is the time he was recruited at the very last minute to join a modest group of eight students from SI, myself and another faculty member on the 2017 Walk for Life. He was the difference maker. Twelve students from Brophy accompanied us and Nathan initiated all the outreach to what became a band of brothers. His sunny disposition warmed up a cold day. He talked and listened to those we encountered on all sides of the issue. It's hard not to love life, all life when you know Nathan! 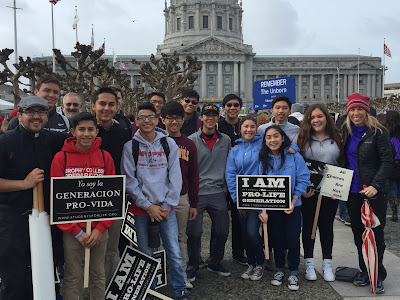 But my lasting impression of Nathan will remain something I have never seen in the 14 years I have taught at SI. When Nathan's name was called for the award, all of his classmates stood up to applaud and cheer, channeling the joy he has always given to us. He hugged every administrator on the stage and when it came time to exit, he took off his motor board and bowed. The clapping and the cheering grew louder; my own eyes began to well up with tears....tears of joy. He walked off the stage and stopped, only to bow again. His example, his simple act of humility was just one of the great gifts he bestowed upon his classmates and on me.

If we can graduate young men and women like Nathan—I have absolutely no doubt that we have succeeded. And as everyone inside War Memorial Gym can attest, we did. Again, thank you, Nathan.

The Ignatian Award winner embodies a motto that guides our school, AMDG. I think we ought to add those words to the description. AMDG or "Ad Majorem Dei Gloriam," is the Latin motto for the Society of Jesus, meaning "for the greater glory of God." Truly AMDG is the hallmark of a Jesuit education, and perhaps our greatest indicator of success. I was reminded of the significance of this motto in my senior final presentations when a beloved student recalled the example and impact of Andrew Phillips as encountered in Sports and Spirituality.

In my book, "Pray and Practice with Purpose: A Playbook for the Spiritual Development of Athletes," I noted that the trajectory of Sports and Spirituality forever changed in my life when the principal of SI shared me with the photo you see here. 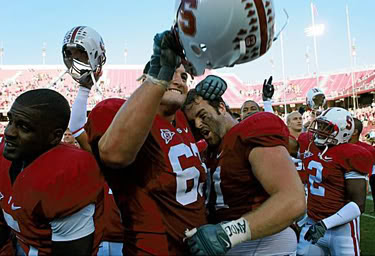 In this two-page landscape photo ("Leading Off, Sports Illustrated 2012) Stanford football player Andrew Phillips embraces his teammate following an epic victory. Phillips has his helmet off, his eye black is smeared and inscribed on the athletic tape around his wrist are the four letters: AMDG.

Though all Christians are called to do what they do for the greater glory of God, those involved in Jesuit education share this philosophy in a very concrete way; AMDG is part of a shared lexicon within the school community and among who share the same tradition. AMDG is visibly promoted. Not only do students write those letters on their work, AMDG can be seen in religious art on campus, on printed material from the administration. And, after reflecting upon the image of Andrew Phillips, the leadership at St. Ignatius College Prep decided AMDG would be printed on every athletic uniform, too. 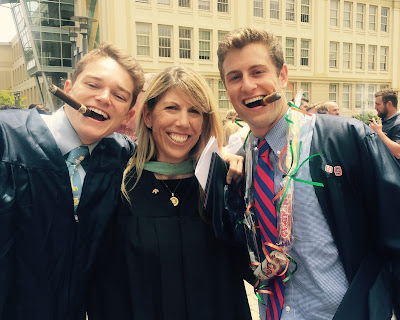 AMDG is not meant to be another decoration. AMDG is far from a marketing tool; the spirit of this motto should never ring hollow or untrue. Therefore, coaches are called to actively lead with AMDG in mind. Athletes are instructed to compete in a way that gives glory to God. They are reminded that sports is another way we can use our gifts and talents not just for personal gain, but as part of something much bigger than ourselves. Those letters are printed on team jerseys lest anyone forget.

The image of Andrew Phillips proves that some student-athletes do not forget. Phillips wrote AMDG on his wristband four years after his from Georgetown Preparatory High School in Bethesda, Maryland. No one at Stanford, a non-religious institution would require him, or any a student-athlete to wear AMDG. But Phillips did. Why?

As I was writing the introduction to my book, I realized, I should just ask him. Phillips told me,

The Jesuits taught me that everything you did should be done with the knowledge that your actions were giving glory to God. I always took a mindset as a player that my play wasn't just helping my team win, but as an expression of my talents it was actually a personal way of giving glory to my Creator. There was something very centering in my ritual of putting those letters onto my wrist tape, and my wife even surprised me by having AMDG etched into the inside of my wedding ring. Though I hung up my pads several years ago, the principle of Ad Majorem Dei Gloria is still something I use as a guide in my daily life.

I had no expectations...no idea how he might answer my question. Phillips words were not much different to me than Nathan's bow. Humble, joyful, grateful, and evidence of the magis.

We will know we have succeeded in education, forming young people of faith when they respond in a way that embodies our mission...when the people in their lives know the words and ideas that have shaped and guided them. Their success is our success, leaving an imprint on our hearts and in our minds.