They Call Me Coach

Walking down Fillmore Street, I looked at the man standing in my path with a vague sense of familiarity. We made eye contact and I could feel my brain scanning its contact files to match a face and a name. Apart from his blue eyes and friendly demeanor, nothing stood out as extraordinary about him ...until, something clicked. I turned around and said what anyone in my situation should say, "Hi Coach." He smiled, and said "Hi there" and gave me the thumbs up.

Steve Mariucci was the head coach of the San Francisco 49ers from 1997 to 2002. Mooch had great success in the NFL, finishing first in the NFC west three times and yet he was fired after a loss to the Tampa Bay Buccaneers in the Divisional Playoffs (My dad is still upset about it...oh and the Bucs went on to win the Super Bowl). Today, he is a analyst for NFL Gameday, but as sports fan can and should know, he will always be "Coach." 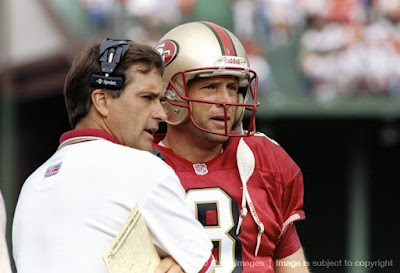 I love being called "Coach." I am proud of the fact that the school where I work, St Ignatius, has a tradition of referring to their coaches with that very title.When I coached at another high school, I was "Ms. Stricherz." In fact, I came to SI before I taught there and yet my rowers never even asked what they should call me, the precedent had been set. "Coach" is a title I take seriously; I know many other coaches feel the same. Our athletes do too.

In the 30 for 30: Catholic vs. Convicts, Tony Rice—the quarterback for the Fightin' Irish—said "The Lord is my shepherd, but Lou Holtz is my coach." I smiled when I heard his words; far beyond the documentary, I have a sense of the relationship that existed between this coach and athlete, and the entire 1988 National Championship team. Rice's words paint the perfect picture of what was, and remains true. Holtz was his coach then, and that's what he is to Tony Rice et al today. 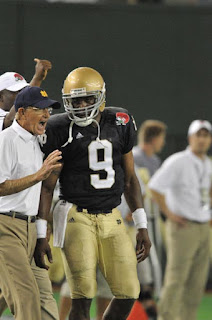 In my book "Pray and Practice with Purpose: A Playbook for the Spiritual Development of Athletes" I wrote about the significance of coaching as a profession and a ministry. I said:

It isn’t uncommon for Americans to name a coach as their personal hero. Whether or not they are enshrined in national or local hall of fame, many coaches are icons, mentors, partners and friends. They are fascinating individuals. We admire them for their unique gifts, their vision, their passion and their success. But their success must be more than just wins; great coaches transform individuals into a team—a band of brothers and sisters, a family that can both play and pray together.

In the fifteen years I have taught in the Religious Studies department at St. Ignatius College Preparatory in San Francisco, CA, I have also coached three different sports: girls’ rowing, cross country and golf. When I leave my classroom and head to the coach’s locker room, I carry another attendance sheet, agenda and a different kind of lesson plan. According to the school schedule, students have six periods in a day. But ask any coach, and he or she will tell you there are seven. The places where we practice and train are much more than a classroom without walls, they are privileged places where young men and women are formed according to our values, with our school slogan or team motto as the guide.

Jim Yerkovich articulates coaching as both a ministry in his essay, "We: A Model for Coaching and Christian Living." Coaching’s import is so significant that it merits its own title. He writes,

If you ever doubt the significance of your role as a coach just consider as Father John Cusick invited coaches to do at a conference entitled "Coaching is Calling" in Chicago 1998, that apart from father or sister, "coach" is the only person in the school who is called by their title. He pointed out that students don't say "teacher" or "principal" but the coach they call "coach." Father Cusick reflected on what it was like after his ordination to suddenly have people calling him "Father." He felt good about the fact that people were giving him the sign of respect after all those years of preparation but also felt the sense of responsibility that went along with this title and role. Likewise, when our students call us "coach" this is a sign of respect, but there is also a great responsibility to be a positive influence in their lives. 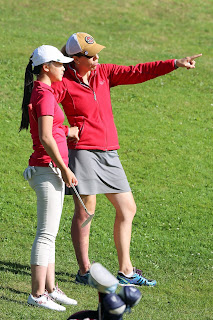 When I walk the hallways at school, in the eyes of many students I am a teacher. To others, I am a coach. For some, I am their coach. The relationship between athlete and coach is a special one. Much like teaching, parenting or pastoring, it is not without its challenges and demands. Being called “coach” is a privilege and an honor. It’s a title that demands many skills and abilities.

Seeing Steve Mariucci out on the street reminded me that being a coach is a critical component of a person's identity, one that remains long after a season—the wins or losses, the championships, defeats and even the firing. In that moment, I could have said "Steve" or "Mooch" or "Mr. Mariucci" but I chose the one I deemed most fitting in an instant. Based on the smile on his face and on mine, it was the right one...the best one. Thanks Coach.

Posted by Anne Stricherz at 9:13 PM