From Birdie to Bogey 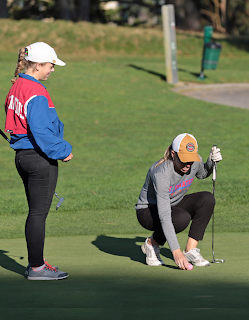 Sitting with another 4-year collegiate rower at dinner last night, I was reminded that to really give oneself to a sport means—among many things—that you speak a certain language. Fluently. The words and terms that characterize basketball, rowing or football, running, swimming or golf, even tennis or wo-po—I mean water polo, form a unique lexicon. Meeting an athlete who identifies with my favorite sport, or one I grew up playing, allows me to speak in my native tongue. However, given the way that sport characterizes popular culture, I believe these languages ought to be spoken beyond the game and after practice. How?

The language of each sport offers a literal idea but there are metaphorical ones to be considered, too. For example fans and football players can tell you what "holding," a "personal foul" or "first down" means, but ask them to translate how that relates to life. Every rower knows what to do when the coxswain tells them wane-off or "way-nuf," but what does that look like in a business meeting or a lengthy discussion. Why should a "PR" be limited to the track or trail. Why can't we think about other PRs or "personal records" in our own lives?

I was reminded of one idea that challenges me both literally and metaphorically last month when I traveled to Bandon Dunes golf resort. During one round, I was playing lights out.* My caddie was happy to tell me several times during our round that I was putting for birdie. After the third or fourth time, I turned to him and said "please don't tell me I'm putting for birdie. Believe me I already know....and then it gets in my head." He nodded with understanding. He said "When the pros are putting for birdie, they make a 6-foot putt 45% of the time. When they are putting for par, the same distance, they make it at a rate of 60%." I wasn't surprised. The pressure, the mental game...it messes with you and I am far from a pro. My biggest problem is my putting (see the * above, great round everywhere but on the greens!) Too often I putt for birdie—one under par, and post a bogey—one over par. Yuck.
I have said "from birdie to bogey" in my short golf career more than I would like. But that term has stuck in my head and given me an opportunity to think of what this statement means metaphorically—in other words, what in life goes from good to bad quickly. Given how much time I've been able to think about this, I have a few ideas. I would love to read your own, but for now, here goes.

The action listed in black seems like a good idea...and occasionally you are in control...you make the putt...but more often than not, you finish the hole two strokes later. Not good. 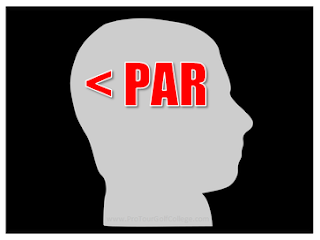 In "Building Your Own Conscience," William O'Malley wrote,  "the first step toward wisdom is to call a thing by its right name. Then you will handle it as it deserves." Though I work with teenagers, I think all humanity—of all ages, would be well served by a sense of choices we make in life that may go from birdie to bogey.

***And for what it's worth, I think bogey golf isn't bad. You still break 100, easily in bogey golf....I'll take that. There are some decisions in life that are probably birdie to blow-up. One can recover from birdie to bogey...I know I have and will do so again in my next rounds. Cheers.