Will Fuller: It's Not You, It's Me

All day I have been feeling as though I got dumped. I was in denial that he might leave. There were rumors. I should have known better and today it was made public: Will Fuller will forgo his senior year at Notre Dame for the NFL draft. 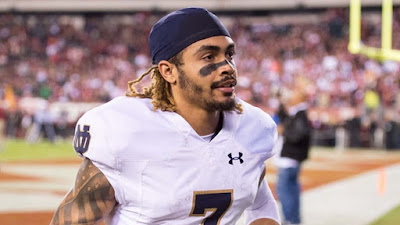 I wrote those words on Sunday, January 3 minutes after reading via Twitter about wide receiver, #7 Will Fuller. Like any break-up, it hurts. I asked myself What went wrong? I found myself wondering Could things have been different? I did a mental inventory and what I read confirmed that I wasn't totally delusional; I had some reason for thinking differently.


Fuller told reporters in early November that he would return to Notre Dame for the 2016 season.

I paid less attention to the second part of that report:


...however, the junior reevaluated and said after the football banquet on Dec. 11 that he was keeping his options open.

Fuller earned the highest award from his teammates at the end-of-season awards banquet. He received the Most Valuable Player honor.


"What changed for us as we look at great players through the years is when the moment was great, he stepped up," head coach Brian Kelly said. "When we needed that big play … he steps up and makes those huge plays." 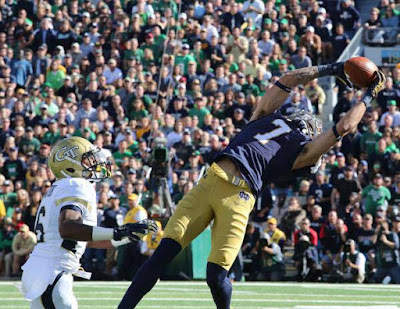 Will Fuller was a joy to watch as our wide receiver. Not a man of many words, he let his feet do all of the talking. As written in "How Will Fuller is keeping Notre Dame in the playoff hunt; Week 5 Walkthrough," Brian Hamilton writes:


We know now that Will Fuller is really fast, and we also know why he is maybe the best receiver in the country: Because he never thought he was fast, which prompted him to rely on painstaking technique and route-running, which now equips the Fighting Irish’s junior star with topflight instincts to complement world-class speed that emerged once he arrived on campus.

Someone once told me the reason to see LeBron James play live is that one cannot tell just how quickly he gets down the court on television. To be a witness, live and in person is much different. I felt that way when I saw Fuller play three times this season.

At the Fiesta Bowl, Fuller scored on an 81-yard touchdown pass in the fourth quarter. From where I was sitting, I could clearly see that two Buckeyes had the angle to catch and tackle Fuller. But what transpired was something different. Fuller locked into a second and then a third gear. Explosive speed. It was a true highlight for Irish fans at the game. Speed that fast and furious makes you go "wow."

Notre Dame fans were able to say that many times this season. I remember at one game-watch a fan quipped "there's our best player we have—do whatever you can to get it to Will Fuller." With a 10-2 record, Kizer did so often.
But Fuller wants to be known for more than just his wheels. If you are interested in the mechanics of a great athlete, the SI article by Hamilton offers more insight.


“You can be the fastest guy in the world, but if you don’t know how to beat a defender, he can slow you down,” Fuller says. “There are a lot of guys out there who don’t know how to turn a defender around, to use him to give yourself an advantage. There are a lot of things I do other than just running fast.”Fuller’s straight-line speed is dangerous. The repertoire of receiver tricks he’s compiled over the years compounds the peril.


There are the simple ones, such as “stacking” the defensive back: If he can get a clean release off press coverage, Fuller moves his body so that the defender is completely behind him instead of alongside him. This gives the quarterback multiple options for delivering a pass and limits the cornerback’s chances to get to any of them.


That, again, is basic curriculum. “Something you learn in high school,” Fuller says. He has moved now to advanced stuff, like inverting the dynamic between cornerback and receiver. On a go-route, Fuller knows the defensive back, almost always, will aim to get his hands on a receiver to stifle forward motion. But Fuller holds his line and more or less invites the contact, so he can smack down on those hands as he peels off the cornerback’s hip. What appears like separation due to incredible acceleration can be, essentially, an optical illusion. “When he puts his hand out, you grab his hand and throw it by you,” Fuller says. “He’s slowing down. You’re continuing to go faster.”

It never got old seeing Will Fuller go faster. In fact, according to Irish 24/7

“He does it in practice, but what he does in the game is really something to see,” Brown says. “He’s that type of fast where he’s running, he’s full speed, he’s running pretty fast…but when he looks back for the ball, there’s something about it that he can reach for another gear. He flies in the games. I don’t know what it is.”

I don't know what it is that makes an elite student-athlete stay in college for all four years these days. I know with the chance for injury, the smart bet is to turn professional and make the money. But another part of me thinks, Why are you playing at a school like Notre Dame if you're not planning on earning the degree? Fuller shared via social media that he was pursuing his dream of playing in the NFL. I have no doubt that it true. But at the same time, Notre Dame fans want to believe our athletes are special because they both want the degree and they want to play. Good, bad, or otherwise, we always think we are different; yes, we think we are special. 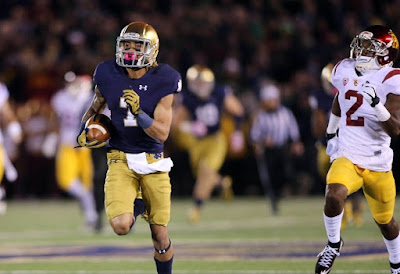 Fuller is not the first and certainly not the last to turn pro early. Some of the greats have left us too soon—Jerome Bettis, Raghib "the Rocket" Ismail, Tom Carter, Golden Tate, Kyle Rudolph. And his classmates Kevare Rusell and CJ Prosise have followed suit in the past three days. It's apparent that the men who start for three years, mentally, are ready to go into the pros. (And a few come back to finish their degree. Rickie Watters made news in the last few years when he returned to campus in the summer months to earn his BA in architecture). But the loss of some of these guys hurts more than others. Some break-ups do too.

I have been reminded this season, largely because of the Showtime series "A Season with Notre Dame Football" is that you enter into a relationship with a team. Team 127 had its own characteristics, gifts, and qualities that made them a joy to watch a group I was eager to cheer for. When folks opt out of that group, one that is special in the way they are, you can't help but feel a loss. Their impact is real. They color each Saturday in a unique way. They bring us joy and we stand with them in the agony of defeat (Clemson, Stanford).

A lot of people do not understand football. Why does it have a near religious following? The movie "Concussion" provided me with an answer. "It's a violent, mindless game. And then it's Shakespeare." Will Fuller was a brilliant actor in the play. While so many of today's athletes are flashy and in your face, Fuller was grace on the gridiron.

Anyone who has been through a break-up has heard "It's not you, it's me." It's almost comical because it's cliche and too often it rings hollow. This is where my analogy to a break-up must conclude. Notre Dame must do what it can to prepare its students for using one's gifts and talents. And ND gave Will Fuller and a platform where others can appreciate them. He will make a living do so and the Irish faithful will delight in seeing him do that. But come September, we'll still miss him.

Posted by Anne Stricherz at 2:18 PM