Thoughts on the Fiesta Bowl 2016: The Score Doesn't Matter

Quite often, words are remiss. But when we get it write, I mean right, it's a treat. And my friend did that with the caption underneath a fantastic photo of him and his son at the 2016 Fiesta Bowl. It read: Sometimes the score doesn't matter.
I'm competitive. I love winning. In theory, I understood what one naysayer wrote in the comments section below the photo; he said "the score always matters." But as someone who was also at this New Year's day bowl game, I think otherwise. It doesn't matter. And that's but one of the lessons I learned in traveling to Phoenix and Scottsdale, where I saw the Irish lose to the Buckeyes. Here are but a few other reflections on what I learned and questions I have raised.

Why the Score Didn't Matter
Ohio State was favored by seven and a half points. As the week progressed, that prediction felt meager. After all, the Buckeyes won the National Championship the year before. When I learned that they returned a significant  starters from that 2014-2015 team, I really started to worry.

I never truly thought the Irish would pull off a win, and I hate seeing my team lose. Ohio State had but one loss and is probably the second best team in the country. I went because I love this team—known as Team 127 (there are 126 in the history of ND football ahead of them). No one played with more heart. When Coach Brian Kelly said "I couldn't be prouder of this group of guys" I know he meant it. 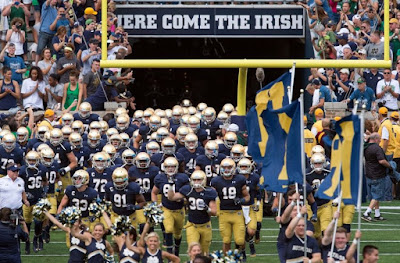 As a coach, every team brings it own gifts and talents to the season. The expectations we have and hold change, and more often than not—it does so in ways that are unwelcome. Injuries befall us. Some athletes never develop as we hope. Academic and personal issues arise. While those challenges underscore a team, they do not define it. I'm not a fan of the cliche "make or break" a team, because I don't think things are that binary.

Each week, it felt as if another player was plagued with a season-ending injury. But each week, a new one stepped forward and offered something inspirational. And that is what "made" this team special. With each "break" came a call to "make" it new. Team 127 did.

Notre Dame was not in the play-offs for the National Championship. At this point, a bowl game is gratis. It's a chance to celebrate and enjoy Team 127 one more time. The score doesn't matter.

Watching a game with someone who knows and loves the game is much more fun.
I had the opportunity to watch the Fiesta Bowl with my aunt, uncle and cousin. For many years, my aunt and cousins would watch their dad working during a bowl game and the rest of us would watch him on TV. He was a Pac-10/Pac-12 official for 35 years. 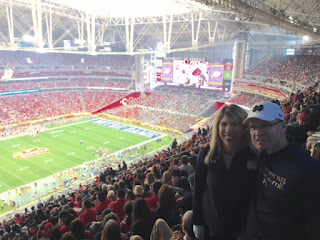 Sitting next to my Uncle Jay, probably the biggest Notre Dame fan I know was a treat for me and for everyone around him. He was never overbearing with his support for the Irish (maybe Wendy and Amy disagree) and he could read plays and penalties exceptionally well. I noticed those sitting around us, kept turning around and looking at him for insight and in agreement with what he was calling out.

I enjoyed seeing that he was unable to not use the hand signals when a flag for roughing the passer or a holding call was administered. A teacher for many years, he also explained what was about to take place or what happened with patience. If my cousin or I had a question, he would answer with thoughtful detail and he made it easy for us to understand. I learned so much and honestly, I enjoyed the game that much more.

Being at a game is always fun, but when you have added insight of what's transpiring on the field, it's that much better. Most of us won't get the chance to watch a game with a referee, but everyone can read more about the rules and nuances of any game.

Breaking the Rules: Why?
Two important players from Notre Dame were unable to play in the Fiesta Bowl for a violation of team rules. The first happened earlier in the week when junior safety Max Redfield missed curfew and showed up drunk at breakfast the next morning. He was sent home and in his apology claims that he was not the only one complicit in whatever took place the night before. On game day, Irish fans were disappointed to learn that defensive tackle Jerry Tillery also violated team rules.

I understand that these athletes are 19 and 21 years of age. I know that people make mistakes—stupid ones, honest ones, selfish mistakes and bad mistakes all the time. I simply want to raise the question: Why?


Team 127 has one final game to play. The finish line couldn't be any closer. They know the opponent they are up against. The time to test the rules and push limits is not now. If anyone knew that senior captain and starter at defensive tackle Sheldon Day wasn't 100%, it was his traveling roommate: Jerry Tillery. We needed "Terry Jillery's" size and strength.

People have said "good for Notre Dame for enforcing the rules." Honestly, we can't afford not to. Rules exist for a reason, otherwise we wouldn't have them. Every person has a right to know the intention and purpose behind a rule and if they as a member of a team, they have an obligation to not only comply, but help their teammates do the same.

I don't doubt that others were with Max Redfield. I am sure there were many other events during the week the team was in Scottsdale that pushed limits, but I would like for the captains in the future to speak about how and why the final game, on the road it not the time. It never is.

Urban Meyer
Meyer is a fantastic coach. There is no other way to say it. But I want to challenge him on one claim. He says that coaching football at the University of Notre Dame is his dream job. With all due respect, Coach Meyer, please stop saying that.

You had the opportunity to coach in South Bend before you took the job at Florida and you didn't. Other coaches (Lou Holtz, Tyrone Wellingham) have had clauses in their contract allowing them to take a job at ND if offered the position. You do not.

When I make a claim about a "dream job" it is usually something that I work toward, that is a stretch and would require great fortune, timing and excellence in my skill set to obtain. It's my heart's deepest desire and I would risk most things to make it happen. You have had that within your grasp—you still do, but it's not underway.

I appreciate that you would love to work and coach at Notre Dame. That is a compliment to our storied program and history. Please just leave it at that.

How to be a Good Fan
I know many people who detest the Buckeyes. They can't stand THE Ohio State University, it's dotted "I" in the band or its OH-IO cheer. Most of these folks come by way of Michigan or Penn State. But their complaints have largely fallen on deaf ears as the Fightin' Irish have played the Buckeyes all of six times before. Needless to say, I was curious to see if their misgivings held weight.

The Fiesta Bowl offered no shortage of opportunity. ND fans were outnumbered, I wasn't surprised. OSU is one of the largest collegiate institutions in the country. Notre Dame is but a quarter of its size.

There was some good banter back and forth and the Irish did what they could to put up a fight (after the first quarter). We gained some ground, but Ohio State never relinquished a padded lead. Near the end of the third quarter, the fans in back of us said loudly enough for us to hear: Don't you think Notre Dame fans should just leave now? That way we won't have any problem getting out of the parking lot. A small part of me wanted to punch that person in the face, but I have heard and seen much, much worse. What they said wasn't vulgar, it wasn't rude. It was cutting, but that's the way things go.

We stayed until the very end. As we got up from out of our seats, my uncle, aunt and cousin congratulated the fans behind us. Each one of them offered comments like "Great game. Congratulations on the win. You have a good team." These fans thanked them and offered compliments to the Irish.

I was reminded of how important it is to take the high road. I was so impressed with my family. I would not have thought to do that, but I hope I will in the future. Fans have more power than they realize. They can enhance the game experience for anyone. Jay, Wendy and Amy did, especially for the OSU fans. Be the fan, be the team that others can say that about.

There are probably 100 other lesson learned from the Fiesta Bowl 2016. I could write about Will Fuller's incredible speed. To see him shift into second and third gear in person IS different than on television. Losing my favorite player, Jaylon Smith early in the game was a killer. Running into two friends from the Class of '96 before the game was a gift. Sure, the score matters, but the way I have calculated this day, I gained something much greater. Thank you Team 127. Go Irish!

Photo Credits
Here come the IRISH
All others taken by those mentioned in this posting!