Many questions loom large for Notre Dame football. Am I'm not talking about who is our starting quarterback. In "Notre Dame President Stands Firm Amid Shifts in College Athletics," Paul Browne, a university vice-president wrote, "Notre Dame prides itself in a lifelong engagement with many if not most of the alumni." I agree. For me, my relationship with the university has been enriched and sustained since graduating in 1996 thanks to the work of my local alumni club and the efforts of the university to reach beyond South Bend. Furthermore, I have encountered fellow alums literally throughout the world (most notably and most often through service and in the Church). However, I think it's fair to ask the question, for most alumni: To what degree is that relationship contingent on football?  I'd like to think a recent visit to campus affirmed my answer. 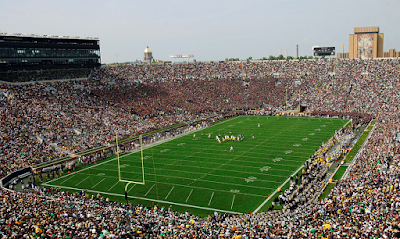 Some context: In 2004, I flew to Chicago to support my good friend and ND classmate, Courtney qualify for the Boston Marathon. I planned to run miles 16-26 of the Chicago Marathon to keep her on pace. It was a great way to experience one of the largest races in the country in one of America's best cities. Her now husband, Dave and I plotted where we would see Courtney, based on her mile splits. We took the El train after we left her at the start with 26,000 other runners. Our first plan was to catch her at mile 3. However, before we did, I was greeted at the El stop by a Dunkin Donuts. I did what any sane person would do: I purchased a tall coffee and some donut deliciousness.

I remember where I was standing and how I felt. I delighted in cheering for the brave runners. I loved the fact that I could enjoy the day without the pressure of the race. I went in for a huge bite of what was probably an apple fritter when a familiar face came running toward me. This runner extended his sweaty hand to give me a high five in lieu of a hug. It was my friend, Father John Jenkins. I wondered if I was in some sort of Seinfeld episode. Here I was 20 years his junior and standing on the sidelines, looking like a glutton. Father John had the glory of the marathon (early stages) on his face and kept a swift pace.  And I...I was eating a donut.

Anyone who knows Father John is aware that his personal and professional work ethic is outstanding. It extends to all facets of his life—his ministry, his writing, his personal communication, his commitment to his family (he is one of 12 children) his physical and mental health and his prayer life. And, his full time job. Father Jenkins is the president of the University of Notre Dame.

I had a chance to share this story with Father John when I ran into him outside the Morris Inn the Friday before the opening football game of the 2015 season. I asked him if he was still running marathons. He would never admit to all that his role demands, which limits his time, even for physical fitness. But a recent piece in the New York Times "Notre Dame President Stands Firm Amid Shifts in College Athletics" gives some insight. I invite you to read the article here.

Father Jenkins' leadership has not been without controversy. Not only did he invite President, Barrack Obama to speak at Commencement, the University honored him with an honorary degree. In his time the "Vagina Monologues" has been on campus and people have questioned the influx of big money that has built—if not overbuilt the University. But if you skim below the surface, you will discover that no one is more committed to the questions of What would you fight for? What does Our Lady ask of us today? and What does it mean to be a Catholic university? No, he has asked What does it mean to be the greatest Catholic University it can be? 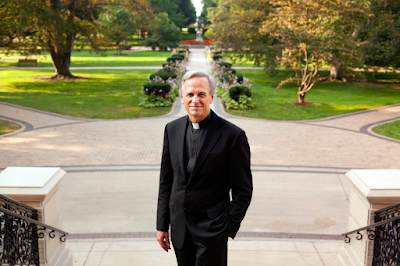 The tough questions he must answer about football and its future will not resolve easily, quickly or without controversy. That question makes mine an easy one.

In my conversation with Father John, I was reminded that he has always made me feel like much more than a friend. Friendship with Father John has helped me understand what it means to be a child of God. He affirms the goodness he sees in me (I know, it's rare...but he gets it). He knows where I teach—St. Ignatius, right? and what I teach—Are you teaching a class about Sports and Spirituality? as the years go by. Moreover, no one has been more supportive of the teaching program that served as the crown jewel of my Notre Dame experience, the Alliance for Catholic Education (ACE), than Father John. This is where I first got to know him, at nightly mass in the summer for my ACE formation. I am so grateful for that time together. 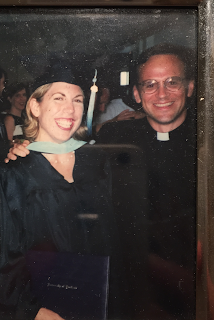 My friendship with Father John affirms to me what Notre Dame offers its alumni—above and beyond football. To be a graduate of Notre Dame is to enter into a lifelong friendship with people from throughout the country (and now the world). It means that you might travel 2000 miles to see a football game, but when you do, you will connect with over 50 friends in one weekend. It means you might even get to spend an entire weekend with a former roommate who became a dear friend. It means, that—thanks to a game watch— you find friends in the cities where you live  You might end of working or living with them, praying for them, grieving or celebrating with them, and some even marry them. Me, I have run with them. I've eaten my fair share of donuts near them and with them. I have taught them and traveled with them. They inspire me and continue to reveal to me what it means to be a child of God.

Photo Credits
All photos appear in the NYT article...except for the one from commencement. Taken at ACE graduation in 1998.
Posted by Anne Stricherz at 10:04 PM