Where the Pope Should Go....Across the River, to the Jersey Side 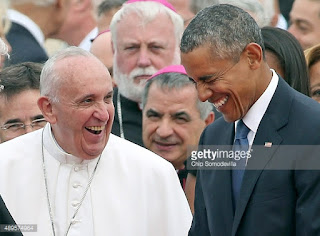 In case you haven't seen it, Pope Francis' trip to the United States features an impressive itinerary. Yes, it is significant that he had a "closed door meeting" with the President and tomorrow he will give the first-ever papal address to a joint meeting of Congress, but what truly stands out for me (and I am sure for him) is that he will visit a Our Lady Queens of Angels Catholic school in East Harlem. Of course he will undertake the Corporal Work of Mercy—visiting the imprisoned at Curran-Fromhold Correctional Facility. And he will eat with the hungry while visiting Catholic Charities: St. Maria's Meals in Washington, DC. According to CNN, "55 tables will be set up for the poor and homeless to be served lunch as the pope blesses the food and walks among them."

Although his meetings in our nation's capital and our financial and social capital (New York) are noteworthy, the heart of his visit is to the city of Brotherly Love where the Synod on the Family will occur. If however I were to create his agenda, I would add but one city for the Holy Father to visit: Camden, NJ. 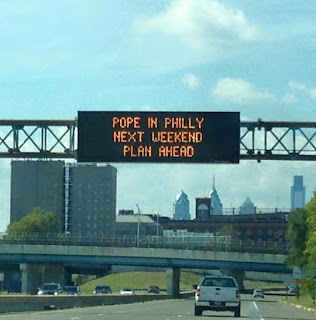 I think Pope Francis should visit where many Philadelphians have not—across the Ben Franklin Bridge to Camden, NJ. Although the FBI has listed it as "America's most dangerous city" it is also a community that is more than a "City of Ruins." The religious art work of Bro. Mickey McGrath, the urban plunge experience via "Romero Center Ministries" and the efforts of "HopeWorks 'N Camden" reveal this beautiful truth.

I first traveled to Camden with a group of students from St. Ignatius College Prep for a "service trip." During our week in Camden, we stay at the Romero Center, located in what was the former convent at St. Joseph Pro-Cathedral parish in the heart of the city.

Their website captures who they are, what they do and why we continue to return across the country; their mission is an inspiration. It reads


Romero Center Ministries was founded on March 24, 1998, on the 18th anniversary of the martyrdom of Archbishop Oscar Romero of El Salvador with a vision for an urban retreat center that would ground people in Jesus’ call to serve the poor among us.

Romero Center Ministries began with the intention of bringing the Church community to Camden to experience an enlightened conversion and commitment. We wanted young people to see that there is both opportunity and challenge in the work of the Church. We wanted adults to understand their role in bringing about a societal commitment to end poverty and discrimination in our world.

We have given students some "in-flight" reading so they have a sense of the history of the city and what went wrong. "The Undefeated Champions in Defeat City" reveals the how and why behind Camden's immense social struggles, its problems with drugs, crime, the police and more. It will reveal what most folks in Philadelphia know about Camden:

Movie Theaters in Camden: 0
Abandoned Buildings: 3,000
I would, however, like to point out they have an awesome roller skating rink....
These statistics are not unfamiliar to Pope Francis. He is all too aware of what the poor encounter and what the trials of the inner-city do to humanity. But there is always another side to this story and he knows that.

The poor can be some of our great teachers; it is remarkable what someone with so little is able to give. This story about "Defeat City" shares with us what Little League baseball, a coach with a vision and heart and a willing group of kids and families can offer. It's worth reading.

I would love to know what the Holy Father would find if he were to do what Springsteen sings and "take that ride across the river to the Jersey side."

Sometimes it's not about what you find, but rather, what finds you....

Posted by Anne Stricherz at 9:51 PM