In Praise of Justin Tuck: On and Off the Field

As a Notre Dame alum, it's nearly impossible for me to not be a fan of two-time Superbowl champion, husband, father, (now) Oakland Raider and the 2014 Harvey G. Foster award co-winner, Justin Tuck. And, after completing a week of service, solidarity and kinship through the Romero Center in Camden, NJ his endeavors both on and off the field make me appreciate #91 that much more.

As written on the Notre Dame Athletics page, Tuck is a "Devastating pass-rushing defensive end who finished his career as the Notre Dame record holder for career sacks (24.5) despite seeing just three seasons of action ..." Furthermore, he "graduated in 2005 with a degree in management" 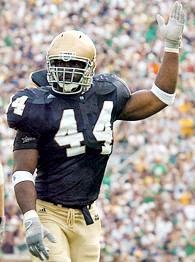 Voted as the Notre Dame Monogram Club's MVP during his senior year, what may impress me more is that he was also named Bookstore Basketball tourney's MVP not once, but twice. In an ESPN Sportsnation interview he said "Freshman year I won the MVP! My team was the champs. We went to the final game and lost my sophomore year, but I was MVP again. And that was the end of my run. I didn't play anymore after that." I wish he had; I wish I was there to watch him play on those Stepan Courts.

Since graduating from Notre Dame in 2005, Tuck "helped propel the Giants to two Super Bowl victories and is a two-time Pro Bowl selection. He was also the leader and Captain of the Giants’ defense for nine years. He recently joined the Oakland Raiders defense and is quickly becoming the face of a reemerging organization." (RUSH for Literacy) I'm not a Raiders fan, but I am excited to see the impact he will have on his team and hopefully the Bay Area. Perhaps his charitable organization "R.U.S.H. for Literacy" will extend to Oakland, CA and to Camden, NJ as well.

"In 2008, the Tucks co-founded Tuck's R.U.S.H. for Literacy, a program that donates money and thousands of new books to low-income children in New York, New Jersey, and Alabama to fight summer learning loss and foster a love of learning." I learned about their project thanks to a posting on the Notre Dame Alumni Association page.

Tuck and his wife Lauran '06 were recently honored with the prestigious "Harvey G. Foster Award." It is given to an alumnus or alumna, often an athlete or someone who works in athletics, who has distinguished himself or herself through civic or University activities. Their website is extremely informative about why literacy is important—in particular for low income youth, it defines "summer reading loss" and identifies how they aim to make a difference. It says:

I was a witness to a lot of what their "Literacy" page outline this past week. I wish more Americans understood what is at risk, but what can be gained by encouraging kids to read. Their organization is thorough and thoughtful in its approach. Please check it out and as you do, I would like to add but one suggestion.
Although we worked at St. Bart's Catholic Church, a parish that has traditionally served the African American community in Camden, NJ for only two days, the kids, volunteers and leadership at their summer camp made a huge impact on our hearts. Ten of my students all of who are rising seniors, played football, four-square, board games, tag and more for with the youth who  range in age from six to sixteen. If you were to ask me who had a bigger impact, I would have to say: they did. They were eager to learn how to throw a frisbee and sing new songs for jump rope. They took to the craft projects with creative abandon and they brought a new level of competition to "Uno." But they taught us more. How contagious a smile can be. How great it feels to be hugged. And that it's always ok to make up your own rules when playing football on a playground (sort of ;-)

The six-hour days flew by, but it's fair to say, everyone could have benefitted from a schedule that had a little more structure. As pointed out by my colleague, kids that age thrive on it, and an easy one to include that too often gets overlooked is reading and/or sustained silent reading.

Reading proficiency is related to how often a child is read to, the quality of education they receive and access to reading materials. Furthermore, when reading is modeled as a positive and enjoyable pursuit, children can and often look forward to it.

I know those students would have loved sitting beside the teenager they met to share a book together. I even think they would enjoy a time for silent but active engagement. Yes, sustained silent reading (SSR) takes management from the leadership, but once it's a regular activity, students more often than not take to it. New books and the ability to choose one of your own(!) in the way that R.U.S.H. for Literacy provides would be a dream for a lot of kids—especially those at St. Bart's.

I don't know how R.U.S.H. for Literacy could see to it that every program they help could encourage a mentor to read to students (they serve third graders who can already read) but it might be something to consider.

In the meantime, warm and heartfelt congratulations to the Tucks, my gratitude to the good people at St. Bart's and I am excited for the 2014-2015 NFL season and begins as a new school year does too. Go Irish!

Posted by Anne Stricherz at 5:34 PM