"Discovery’s Shark Week reached an important milestone this week: it hit an all-time ratings high, which the network partially attributes to an increase in female viewership" (The Verge). Many people consider Shark Week a highlight of summer. The week-long shark programming captivates the attention of all ages and the hours that no one seems to have.

Last year, my classmate and friend—Alex Montoya got me to think of "Shark Week in a new way" when he posted a photo of one of super athlete, former Notre Dame All American at wide received and pitcher Jeff Samardzija aka "The Shark." This image might scare defensive backs in the way a Great White or Mako frightens swimmers and surfers; hence the caption underneath it read "Shark Week!" That week, Samardzjia fans were treated to a different picture of the Shark in action everyday. 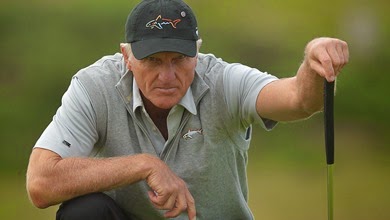 Each "Shark Week" is unique—new stories (both fictional and nonfictional), current reports and never seen before shark footage. In that spirit, I would like to honor another great shark, known to many as "the Great White Shark," former professional golfer and entrepreneur, Greg Norman.

Norman, a former professional golfer and entrepreneur is appropriately named. His moniker is a reference to his size, aggressive golf style and in reflection to the native coastal animal of his birthplace—Australia.
According to ,


"Greg Norman was labeled the "Great White Shark" by a newspaper reporter during the 1981 Masters Tournament, but he began exhibiting all the characteristics of that deep-sea creature long before that.

As a teenager, like today, Norman never did anything halfway. He was a regular on the rugby and Australian Rules football fields of Queensland and was regarded as an outstanding player. He was born Feb. 10, 1955, to Mervyn and Toini Norman. Merv was an engineer and Toini a homemaker and an accomplished golfer.

The young Norman, whose older sister Janis and parents still reside in Australia, spent his time swimming, fishing and playing contact sports with friends. But when as a 15-year-old he decided to give golf a try in 1970, he did it aggressively with the intent to succeed.

His interest in the game started with an unusual offer to his mother that he caddy for her during a regular mid-week game. Following the round, he asked if he could borrow her clubs and set out on his own.

What his mother could not have imagined was that the young boy who had never taken an interest in the game would become one of the greatest golfers the game has ever known.

Just two years removed from that first day at Virginia Golf Club in Brisbane, Australia, Norman was a scratch golfer, averaging par or better each time he played. For the next few years, he spent time working as an Australian PGA trainee, playing amateur and open tournaments throughout Australia before turning professional in 1976 -- just six years after caddying for his mother.


As someone who took up golf two years ago myself, I stand in wonder and awe at the sheer talent and ability to go from neophyte to near master is just two years time. Anyone who remembers Norman in his prime knows why golf fans were drawn to him. No need to chum the waters for this competitor, he was always lurking, waiting to lock and load. Often times, such aggressive play cost him, but it was fun to watch."
He could be personally endearing yet ruthless as well. Norman fired his caddie of seven years, Stevie Williams over the phone. "I didn't think that was the right way to do it. It was the first time I had been fired." Consequently, Williams vowed he would never become that close another golfer again. Those next golfers include Tiger Woods (who fired Williams in 2011) and now Adam Scott. But Norman also mentored Williams, perhaps in the same way that his mother Toini did. Williams said, "He knew I was young. He taught me the ropes. I would’ve never got to where I am today without starting with Greg Norman. He taught me a lot about the game and was a fantastic player to watch. He was so good it was like he was almost teaching me." (Q & A; A Caddie: Steve Williams) 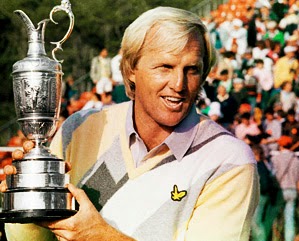 I have often wondered about our fascination with sharks and in turn Shark Week. I believe we love "Shark Week" is because sharks inspire a sense of awe and wonder, let alone fear. Their beauty is undeniable. And that's an impressive context for thinking about Greg Norman and his legacy in the game of golf. Both reflect the majesty of God's creation.

Posted by Anne Stricherz at 9:28 PM