My Favorite Sight at AT&T Park: Will Clark #22 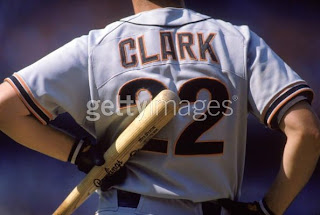 Hustling toward AT&T ballpark, my peripheral vision caught something I never see.  It’s a San Francisco Giants jersey with the number 21 on the back and the name “Kent” above it.  Jeff 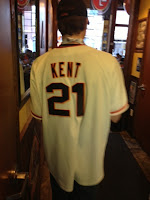 Kent was skilled second baseball with the Giants (1997-2002) before completing his hall of fame career with the Los Angeles Dodgers. Traitor.  I felt the need to capture this image only to immediately upload it on Facebook with the caption “things that should not be seen before NLDS Game 2.” I wish I hadn’t; that’s not a very spirited pregame message.

Accentuate the positive; eliminate the negative—right?  Rather than posting what should not be seen or what I never see, I should have commented on what I love to see and often do at Giants games.  Go to any Giants game be it at home or on the road on any day of the year and I guarantee you will see the baseball jersey of my favorite ball player of all time Will “The Thrill” Clark. 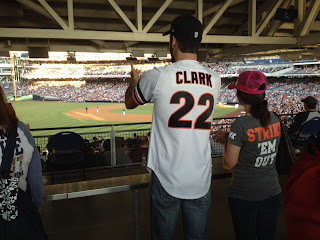 This past summer Giants productions created “Inside the Clubhouse: Will The Thrill” This hour long program featured video highlights, interviews with Giants in the late ‘80s and ‘90s and those veteran Giants today and the Thrill himself—at work as a hitting coach, with his family, in his office, fishing in Louisiana and in his role with the Giants today.

It was an hour of pure joy? bliss? enhanced engagement?  “The Machine” could have walked by and I would not have noticed.  I was reminded of why I, like so many San Francisco Giants fan hold this lefty near and dear to our hearts.  I could wax poetic about the 1989 NLCS MVP and the 1991 Rawlings Gold Glove winner, but I think those that worked or played with him say it best. 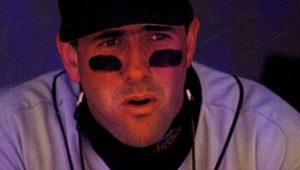 Former Giants GM, Al Rosen said, “If you had 25 Will Clarks, you would never have to worry about winning.”  No one would deny that Clark loves to win.  He said, “I didn’t walk out there to lose.  I walked out there to kick your ass everyday. I didn’t want to beat you a little.  I wanted to beat you a lot.  I wanted to stomp on ya!  And I wanted my teammates to want the same thing.”

It would be downright impossible for me not to be fired up by a teammate with that intensity and love for the game. His tenacity and passion made him a natural leader in the clubhouse.  Bud Black claimed, “A lot of his success came from his confidence as a player.” When asked if this was true, Bob Brenley replied,  “Confident?  Off the charts!  It was obvious to everyone that saw him he belonged in the big leagues.  He was arrogant but not in a negative way.   The kid knew he could play.” He made an impression from the start.  Most fans know that in his first major league at bat, he hit a high fastball from Nolan Ryan 400 feet over the fence in Centerfield at the Astrodome.  What I didn’t know is what Clark told his teammates in the dugout after he rounded the bases.   In his shrill, high-pitched voice he yelled “all right, let’s get some more!” loud enough for all of Houston to hear. That’s Will!

The program reveals that Clark wanted to “stay a Giant for all my life.” Unfortunately, he played at a time of no revenue sharing—Barry Bonds, Matt Williams were on the top of their games and Clark became the third man out.  He went to Texas, to Baltimore and retired at age 36 as a St. Louis Cardinal. 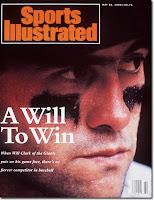 Will said “If I’m going to go out, I’m going to go out on top.”  In his final season in MLB he helped the Cardinals make it to NLCS only to lose to the Mets.  It’s worth reporting that he batted in that series and completed his career with a lifetime batting average of near 500 in post-season play.

The Giants could have used a player like Will Clark in their line-up during the 2012 season and especially during Games 1-2 of the 2012 NLDS series.  Reflecting back on his 1989 post season performance against the Chicago Cubs he said “Believe it or not, there’s a lot of guys who when the bright lights come on, they don’t want the bat in their hands, or they don’t want the ball on the mound.  I was quite the opposite.  If there was a crucial or clutch moment—I wanted the bat.”  As Roger Craig said “He was a manager’s dream.”


Players like Will Clark don’t come around all that often, but when they do, hold on and savor it.  As I sat in my seat on Sunday night, I started to wonder what jersey Giants fans would wear years from now.  The MVP hopeful, #28 Buster Posey came to mind.

Seeing the "Clark 22" jersey isn’t something I take for granted.   In a strange way, I feel connected to the people that wear one.  Being a fan of "Clark 22" means you love the game of baseball because you love one of its all time greats.  Giants announcer and Clark’s former teammate Mike Krukow said,  “He is the best pure baseball player I’ve ever played with—instinctively, on the base paths, in the batter’s box. He had a sixth sense.  Truly, he was born to play baseball.”