Looking at Detroit Tigers pitcher Max Scherzer during ALDS Game 5 last week, I couldn’t help but respond to my friend’s comment with a “bad” theology joke.  What’s up with his eyes? Whoa! One is so blue and the other is so dark.  He should wear a contact lens!  I turned to her with a straight face and said “he’s just like Christ.  Jesus sees us with two eyes—one human and one divine.”  I thought it was brilliant (another pun?).  Was it appropriate? I think so…. 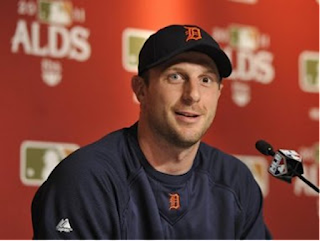 In case you haven’t noticed thanks to the popular writer, James Martin, SJ there’s been a movement toward emphasizing and recognizing the need for joy and laughter in the Catholic Church.  Fr. Martin may promote his latest book Between Heaven and Mirth: Why Joy, Humor, and Laughter Are at the Heart of the Spiritual Life

but he’s on to something. Being a Catholic is demanding—we must carry our cross, die to self and live the call and the challenge of the Gospel. But this doesn’t mean we need not find joy in the journey or a laugh along the way.

Stephen Colbert, one of the more popular figures in mainstream media today is both a Catholic and a comedian.  His story moved me. “A Comedian and a Cardinal Open Up on Spirituality” explains why he does what he does.  It says, “Mr. Colbert is the youngest of 11 children, raised by Catholic parents who both attended Catholic colleges. His father and two of his brothers died in a plane crash when Mr. Colbert was 10. He said that after the funeral, in the limousine on the way home, one of his sisters made another sister laugh so hard that she fell on the floor. At that moment, Mr. Colbert said he wanted to make someone laugh that hard.”  French philosopher and Jesuit priest, Pierre Teilhard de Chardin, S.J. said, “Joy is the most infallible sign of the presence of God.” Indeed God can be with us at the funeral of our parents or even at an event that brought together Timothy Cardinal Dolan and Stephen Colbert in front of 3,000 students at Fordham University on September 14, 2012. 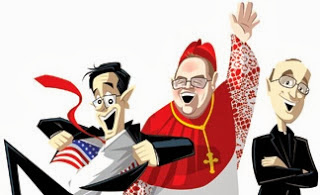 The New York Times reported that “The evening was billed as an opportunity to hear two Catholic celebrities discuss how joy and humor infuse their spiritual lives. They both delivered, with surprises and zingers that began the moment the two walked onstage. Mr. Colbert went to shake Cardinal Dolan’s hand, but the cardinal took Mr. Colbert’s hand and kissed it — a disarming role reversal for a big prelate with a big job and a big ring. The event would not have happened without its moderator, the Rev. James Martin, a Jesuit priest and prolific author who has made it his mission to remind Catholics that there is no contradiction between faithful and funny."

So in that spirit, I would like to share another example of what has brought me joy and laughter, even bemusement in sports and spirituality.  I encourage you to think of your own.

As many San Franciscans know, October is our warmest month of the year.  We finally have temperatures climb above 75 degrees for more than one day at a time.  This is a welcome thing, with exception. 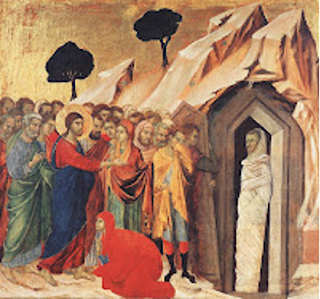 My path to cross country practice leads me from the women’s coaches’ locker room past the girls’ locker room and then…the boys’ locker room.  As the season progresses, an odor builds to the point that it penetrates the hallway.  Boys sweat and girls do too. But boys who play football wear pads that they do not wash. I have often wondered if a power hose could assuage the olfactory cocktail of dirt, blood and sweat.  On these days, I cannot help but thing of John 11:39.

Jesus arrives at the home of Mary and Martha knowing their brother, his beloved friend Lazarus is dead. Jesus said, "Remove the stone." Martha, the sister of the deceased, said to Him, "Lord, by this time there will be a stench, for he has been dead four days."

I walk by that locker room and after I am assaulted by the stench. I can’t help but wonder what has been dead for four days.  I also want to know how boys are able to eat food in there.  Boys.

This is just one of many ways to link the tradition, stories and experiences of our faith to our everyday experiences—good, bad and ugly.  Funny and joyful.  We can all use a little more of that!