First World Problem: Should I Go to the Game or Not? 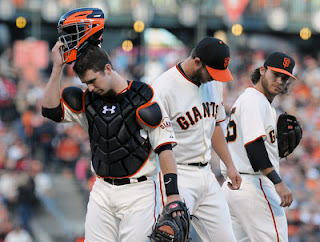 When I left the yard last week, I truly believed I would not be back in 2012.  I was angry about the money, time and emotional energy I had invested in a baseball game (yes, a first world problem).  However, this story took an unexpected turn as something magical happened in Cincinnati.  The Giants captured the National League Division Series title and with the St. Louis Cardinals beating the Washington Nationals, I was suddenly confronted with the question of whether or not to return to AT&T Park for another game.   Why should I?  It’s expensive, time consuming, and frankly it was a risk.  I thought: Who wants to see another loss?  What if it’s another 8-0 shut out? Unfortunately, the outcome was no different…and yet it was. 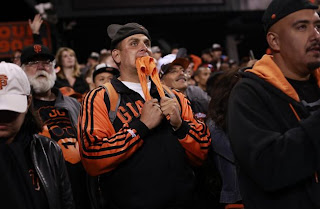 I was reminded of why going to something in person is worth it.Dr. Tino captures my sentiment in his article “March Madness.”  He writes,

“I, too, believe in the Church of Baseball. From the precise diamond patterns mown into the outfield grass to the lukewarm hot dogs, there is something magical about being present for a baseball game. Of course, I also believe in the Congregation of Hockey, the Fellowships of the Winter and Summer Olympics, and, of course, the Religious Society of Basketball, whose most holy shrine (as far as I’m concerned) is one Cameron Indoor Stadium, home to the Duke Blue Devils. Your opinion might vary. So today I thought we’d take a look at spirituality and sports.”

Now, some might argue that sports are a distraction from more meaningful forms of interaction. Others say that the emphasis on competition—to the point where athletes seek unfair advantages to get ahead—is spiritually harmful.[1] I can’t say I disagree entirely with these things. It does seem sometimes that in a world with so many problems, taking time to play sports is frivolous—and that goes even more so for watching them (after all, those who play are at least getting some exercise). And yet, there has to be room in our lives for things that are not so serious, right?  For me, one of those things is sports."

He includes five examples of how sports are spiritual.  And the one that spoke to me as evidenced by my time at AT&T park is that one of the spiritual gifts of sports is its ability to bring people together. 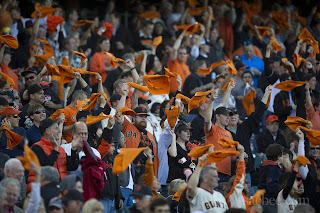 I have said it once and I’ll say it many times.  We are incarnational beings.  Jesus, The Incarnation, became one of us because the experience of the flesh, our very presence—our spirit and our person is what it is all about.

In a day and age when many sports provide better viewing options on television than in person, it cannot be taken for granted that sports can or will bring people together.  Yet I believe the reason they do is because a critical component of going to a game is for the experience it provides.  The fans set an important tone.  TV cannot capture the energy or “spirit” of a venue.  The intensity that fans and athletes bring to postseason baseball is incredible; truly it is worth experiencing—in the flesh.  And I say that as a fan who has experienced the spectrum of that so called “spirit.”  From NLDS game two (2012) where fans had little to nothing to cheer about to NLDS game one (2010) where Tim Lincecum threw a complete-game shutout, striking out 14 (one of the top 5 sporting events I have attended). 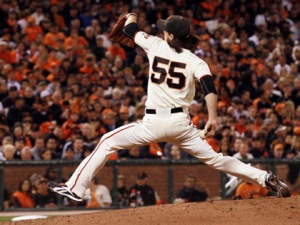 But one need not attend a ballgame to understand how sports bring people together.  NLDS Game 3 began at 10:00 a.m. Pacific time.  This was tortuous to a number of students and teachers, many who bleed orange and black.  However, the latest in technology, such as the school iPad 1:1 program (an iPad for every student) dramatically changed this nightmare.  Those students who had purchased the MLB app were able to watch the game and still others could follow it via Gametracker.  Still others were able to stream audio through the ESPN sports app.  So many individualized ways to follow the Giants.  In determining how I would follow this game, I realized I was a witness to a new era.  Technology had provided so many options.

But leadership in the school decided to take advantage of this technology and broadcast the game from a projector onto a huge screen in the gym for students to watch from the bleachers (during their lunch or resource periods).   Nearly 300 of us sat and watched Sergio Romo’s showdown against the heart of Cincy’s lineup.  In the middle of his epic battle against Jay Bruce, the principal entered the gym wearing a wild orange and black wig, a spirited contrast to his shirt and tie.  The crowd went wild, but not a wild as we saw the final out and realized the Giants did the unthinkable.  They came back to win three straight on the road.  In doing so they were crowned NLDS champions.  We hugged, jumped up and down, gave high fives and for the rest of the day felt the joy of victory.  Sharing it in this way made it that much sweeter. 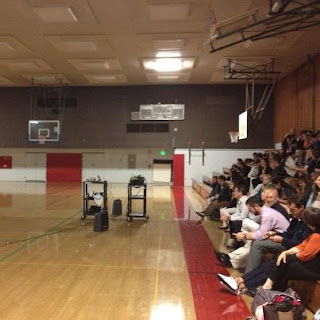 My students were graced with the opportunity to learn great things in a variety of subjects in school last Thursday (and everyday).  But, I have no doubt many of them will remember coming together to watch a great game.  Amidst the hundreds of pitches thrown and balls fouled out, we shared stories, cracked jokes, I know I had to do breathing exercises to lower my heart rate and more.  It’s important to come together for life’s great moments—graduation, birthdays, baptisms and for the challenging ones too—a death, in illness, tragedy and beyond.  And yet some of those great and challenging moments need not be separate from something like sports.  Sports teams captures our hearts and affection, our hopes and our dreams.  If that’s not spiritual, I don’t know what is…

NB: Let me be very clear, when I raise the question "Why go to a game?" I am ever mindful of how lucky I am to even raise it.  I am grateful I can!  But I go because I never know what I will witness, what I will experience, who I might sit beside or run into.  I go because I can't leave the ballpark without being a witness to something spiritual--full of aching pain and delicious hope....


[1] Lawrence, Ian, “The Emergencey of Sport and Spirituality in Popular Culture’, http://www.thesportjournal.org/article/emergence-sport-and spirituality-popular-culture)