I looked with amusement at the freshman religion project on the wall.  Students had to create Jesus’ Facebook page. What would his status say?  Although his “friend” list caught my eye—I knew so many of them! Mary, Martha and Lazarus, his personal information got me thinking.  It listed his age as 37.  Oops.  Jesus didn’t live to my age; I wish He had.  I began to wonder how the Gospels might be different had they chronicled seven years of Christ’s ministry rather than three.  What would Jesus have done?

In the last six months, my dear friend Eileen has experienced the death of two very close friends.  Like Jesus, both men died too young—one at 38 and another at 35.  Why the Lord called them home at this time is a great and tragic mystery.  It leaves me pondering “why” and in the next moment I find myself grateful for those who live the lives that do.  I am thankful so many people are (still) with us. 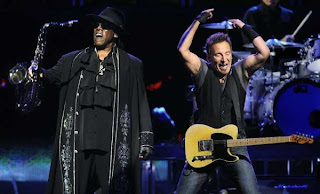 I left my 17th Bruce Springsteen concert with those same thoughts in my mind and my heart. Even though he died at 70, a huge part of me believes that “C” died too early.  I needed to go to the place that Clarence referred to as “the healing floor” to begin to understand E Street and the music without him.  When I got there, I found that Joan Walsh's words were true.  It was only then that “I understood what a thorough-going, transcendent exercise in communal grief and joy it (his live performance) has become.”


And the sorrow certainly made way for the joy, and thus, the gratitude.   That gratitude floods my prayer the morning after I wake up from one of his performances.  I have said it with intention ever since I heard Rosalie on KFOG’s Acoustic Sunrise proclaim “What a concert last night!  The world is a much better place because of the man, the music, Bruce Springsteen” over 10 years ago.   It has stayed with me because it’s true.  It’s a worthy prayer.

Springsteen's 17th studio album "Wrecking Ball" includes a thematically appropriate track: “We Are Alive!” Thanks be to God that he is. What he is doing at 62 years of age is incredible.  Springsteen performed and entertained for 3 hours and 9 minutes.  He danced, he sang, he preached on his stage of rock ‘n’ roll. Total soul healing.  This man has been on the cover of AARP; he left me exhausted.  He will turn 63 while on tour, September 23!

Fortunately we also have examples in sports of men and women who are not letting their age get in the way of their passion.  Just last week Jamie Moyer of the Colorado Rockies became the oldest pitcher in Major League history to win a game.  I thought it was a typo when I read that at 49 years of age, the pitcher earned his 268th career victory.  And as we look ahead to the Olympics in London, Dara Torres won’t be the only mother over 40 competing for a spot on the US swim team.  Five-time gold-medalist Janet Evans has returned to the water.  Again, I am grateful for the lives they are living.


For those who are with us—the Boss, members of the E Street band and athletes who are doing what we once thought impossible because of age—thank you for sharing your gifts and talents with us!  And for those no longer with us, I am grateful for all you have shared. 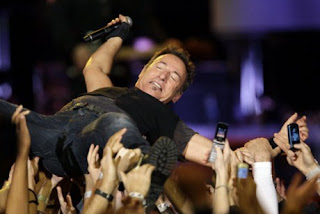 I had no idea the words of  “We Are Alive” would emerge as a fitting theme for what was the best show I have seen on the west coast. It is  sung from the perspective of those who have died, yet they are the ones who proclaim “We Are Alive!”  Indeed, it is the Christian paradox.  For those of you at the show on Tuesday night, you know that Bruce didn’t need to ask “Is anybody alive out there?!”  We all were--visible and the invisible, the living and the dead.