What the Stolen Christ Child & Bryan Stow Helped Me Realize

To the anger, dismay and shock of many parishioners at St. Dominic’s in San Francisco, the Christ child was stolen from the church’s beautiful crèche. Our pastor told us about the missing baby Jesus by way of his homily as he artfully connected this loss to the message of that’s Sunday’s Gospel reading. And I this past Sunday, four full months later, I was informed he had returned on Good Friday.  He was left in the bathroom.  He was clearly not misplaced or lost.  He was no longer in a manager, but in the toilet.  Fr. Xavier said “there’s a story here and we simply don’t know it." 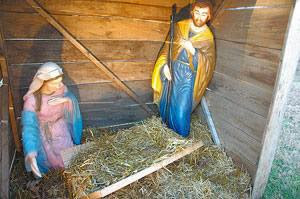 He’s right, there is a story here and I can’t begin to understand it.  He held up the baby Jesus for everyone to see and I started to cry.  A floodgate of tears was my response.  I was surprised by my reaction as I listened to his greater questions in light of what had happened.

That night during prayer, I revisited my emotion, my sadness.  I asked myself Why I was feeling this way? It’s a 10-inch wooden doll. Why do I care? I came to understand, anyone can say it’s an image or a symbol, but to me it is more.  It represents that which I hold sacred: the Incarnation.  God became flesh; God became one of us and did it from life’s beginning—as a vulnerable, dependent, helpless child. 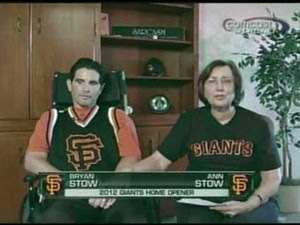 My reaction reminded me of one I experienced on Opening Day 2012.  When Bryan Stow appeared on the big screen with his mother to “virtually” hand the baseball to his son Tyler for the ceremonial “first pitch” I could not hold back the tears.  I was not alone.

When Giants fans first learned of the Bryan Stow incident nearly one year prior our reactions were no different than my fellow parishioners—anger, dismay and shock.  There was a story there, but it did not amount to much. According to the Huffington Post, "the “Police said the two men began taunting three men in Giants gear with expletives as thousands of baseball fans left the stadium after Thursday night's 2-1 Dodger victory, Detective T.J. Moore said.
The Giants fans tried to distance themselves from their assailants, and two made it away from them, but one was struck with fists on the back of the head and as he fell, his head hit the ground in a parking lot on the third base side of the ballpark, Moore said.”

I stood there on Opening Day and I asked myself the same questions—Why do I care?  Honestly, I don’t know Bryan Stow apart from the fact we both love the Giants.  Why did so many people around me feel the way I did?  Why has his story captured our hearts, prayers and hopes? 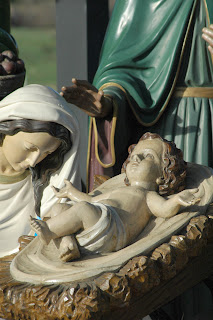 Perhaps on some level we know that what happened to Bryan Stow could have happened to any one of us. Stow et al didn’t bring on the violence, they didn’t ask for an altercation.  However, this is more than a sport rivalry turned bad.  It represents a lack of respect for human life or like the Christ child that which is sacred.

We carry a bit of the Incarnation in us, as we are made in God’s image and likeness.  We respond with tears, sadness and anger because any violation of that dignity is an assault to the sacred.  And when that which is sacred is compromised, our souls suffer. Truth and beauty, even humanity is compromised.  Our reaction should be tears or sadness, confusion or dismay.

Someone may have stolen the Christ child from the crèche and placed him in the toilet on humanity’s darkest day of the year, Good Friday, but once again, Jesus as Lord is risen.  He continues to teach me even from the lowliest of places.