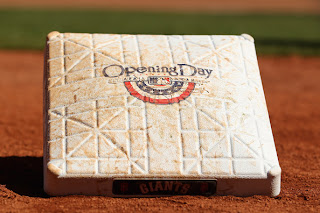 The Easter story is full of paradox and surprise. Unbeknownst to me, I discovered Opening Day 2012 for the San Francisco Giants was too.

America magazine states that Christians must consider Jesus’ wounds, even in His risen glory. Although Jesus carried with him the signs of his suffering, His woundedness did not prevent Him from commissioning His disciples to preach. He invited his beloved to see and to put their hands in his side. The locked room where they hid must have been filled with fear and yet excitement, sadness and joy, paradox and surprise.

I find it appropriate that baseball officially began in San Francisco in the Easter season. With the 40 Days of Lent now behind me and the Resurrection in our midst, I met my first Opening Day with Easter joy! Yes, Easter joy. This joy is bright and abundant, almost overflowing. It is greeted my anticipation and hope of what is to be. I arrived the ballpark with this joy in my heart. 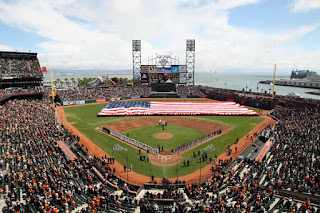 I was greeted outside China Basin’s cathedral by the ceremonial bunting I love. I was anxious to “meet” the new Giants in their uniforms and curious to see the changes/improvements to AT&T. I know that Opening Day often draws its own crowd (who many consider lack loyalty), but regardless, the energy was palpable. The skies had finally cleared and we made way for those early steps toward another World Series trophy. Why not dream big? On Opening Day, hopes are high and all is possible.

Paradox
Seeing Melky Cabrera and Angel Pagan meant that certain players were no longer on the roster. Some athletes come and go and others leave a mark on our hearts. For example, it was hard not to love Cody Ross, the 2010 NLCS MVP. At that time “Ross was Boss” but the former rodeo clown among others wasn’t someone the Giants committed to resigning. I was reminded that beginnings are often endings. 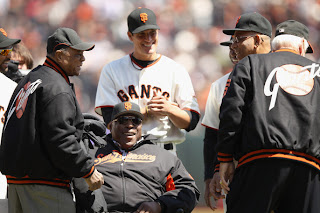 As we honored the 1962 Giants upon the 50th Anniversary of their National League pennant, I noticed Willie McCovey was on the field, sitting in a wheelchair for the first time. It was sad for me to see a man who was once called "the scariest hitter in baseball" by pitcher Bob Gibson so limited in his mobility.

The starter Matt Cain has a losing record in Major League baseball (70-73) Cain is a workhorse (KNBR’s Eric Byrnes plays a sound bite of a horse nay-ing every time he talks about him!) and has been the second man in the Giants outstanding pitching rotation for the last 7 years. Despite his impressive 2.88 ERA, he barely finished the 2011 season with a winning record 12-11. Yes, he signed a contract for a record $127.5 million dollars. Is that paradox? I think not. Matty delighted the crowd with a one-hitter and twelve strikeouts.

Surprise
I had no idea how good it would feel to see Buster Posey back in the line up. After last year’s team’s hitting woes, it was a relief to see this man not only behind the plate, but driving the offense to our first win at home. The standing ovation he got was especially loud. We cannot wait to see how much better the team is with the 2010 Rookie of the Year healthy and healed. 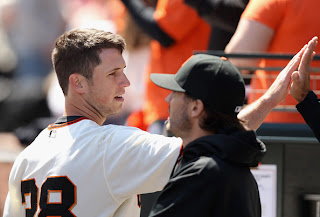 But anyone who was at the game will share with you the greatest surprise of the day was one that was highly emotional. Bryan Stow, the Giants fan that was severely beaten on Opening Day last year in Los Angeles, and his mother Ann joined the festivities via a live satellite linkup from his rehab center. The hope was that he would be healthy enough to throw out the ceremonial first pitch. Instead, his son Tyler was given the honor. 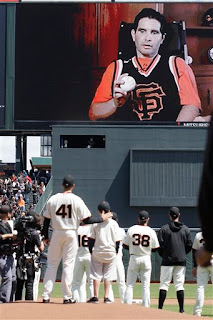 Fans cheered as Bryan held up a ball in a symbolic gesture for his son, saying, "Here's the ball - good luck, son." Tyler then fired a fastball to home plate, and the crowd again erupted in cheers.

I was trying to process all that I just witnessed. I was in no way prepared for the flood of emotions that overtook me at that moment. I looked at Bryan Stow and thought “this is a man still in great physical pain.” Jeremy Affeldt, who accompanied Tyler to the mound, said there wasn’t a dry eye among his teammates.

But then I remembered the look on the face of Affeldt when he hugged Tyler. They both wore a smile that reflected that Easter joy! I looked at the people around me cheering, crying, silenced and smiling and I was amazed at how what feels like a huge fan base and fairly loose community truly rallied behind Bryan Stow; his life, his cause and his story. This was not a moment to think of the pain and suffering that Stow and his family has endured. No, that pitch, that ceremony and that message was to “play ball!”

I hope during the 2012 baseball season you will look for signs and moments of paradox and surprise. When and if you do, I hope you are able to recognize joy—Easter joy—in them.

Photo Credits
All Images from