Fog sucks my soul. I suppose I shouldn’t live in San Francisco because “Fog Happens” as a bumper sticker on a truck parked in my neighborhood reminds me. Every time I see it—pending that I can if the fog isn’t too thick—I laugh. However, it’s a little more of a challenge to laugh about fog when it’s 53 degrees in July. San Francisco was the coldest city in the nation last week—even colder than Anchorage, Alaska. Regardless, I couldn’t help but think of the fog as I watched Saturday’s round at the British Open. 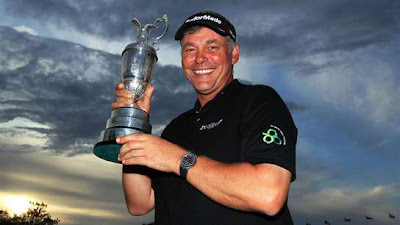 The first reason is because as I viewed the 140th Open Championship in total solidarity with fans and players at Royal St. George’s. The rain was ferocious and relentless and accompanied by 30-mph winds. Players went through four and five and six gloves, four and five and six towels. Keeping grips dry became a two-person operation, player and caddie bracing futilely against the wind and rain.

Although we had two nights of rain last week, it would be a stretch to claim that weather conditions in San Francisco were as abysmal as they were in Sandwich, England. But the UK is known for rain—a lot of it—even in the summer months; I’m sure the English would welcome a break from it in the same this San Franciscan would welcome one from fog—at least in June, July, and August. 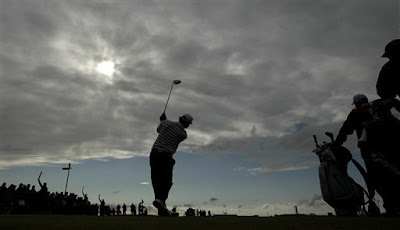 The second reason is because of the metaphorical understanding of fog. Who hasn’t been “in a fog?” How often has the fog in our own lives prevented us from seeing our destination? And who or what in our lives has served as a foghorn? A foghorn doesn’t help with our vision, but it does send out different signals and tones, their message still transfers through the thick of it all. Did you know there are over 30 different pitches of foghorns in San Francisco alone? Have you ever noticed the difference?

Darren Clarke had gone for more than 15 starts in the British Open before winning. In fact, this was the Northern Irishman’s 20th try. He hardly seemed on top of his game, having dropped out of top 100 in the world and not even eligible for the last three majors. It is safe to say that his game and his life have been in a fog for many of those years.

According to Paul Newberry, “Five years ago, Clarke lost wife Heather to breast cancer, a disease she had seemingly beat until it came back with a vengeance. He buried his spouse and faced life as a single father with two young boys to raise, a guy who'd had it all but suddenly found himself asking why life was so unfair.” 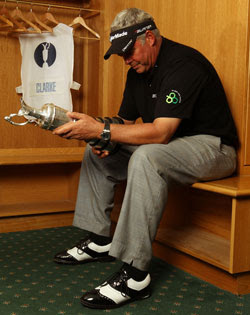 For Clarke, the fog was thick, but it eventually broke….which inevitably it does…even in San Francisco. By the time Clarke and Glover teed off the skies lightened a bit. An hour later the rain stopped. And the lead Clarke secured on Saturday combined with his even-par 70 on Sunday secured the Claret Jug. He dedicated his win to his late wife and his two sons Tyrone and Conor. He is also engaged to the former Miss Northern Ireland, Alison Campbell. Those are good weather conditions.

I think it’s important to know what “sucks your soul.” Because fog does that, I try to get out of it both literally and metaphorically every summer. I visit my brother and nieces in Washington DC; spending time with them, being in the humidity and going to the beach feeds my soul. A healthy spirituality is contingent on knowing what feeds your soul and what sucks it. According to Ron Rolheiser “A healthy soul, therefore, must do two things for us. First, it must put some fire in our veins, keep us energized, vibrant, living with zest, and full of hope as we sense that life is, ultimately, beautiful and worth living. Whenever this breaks down in us, something is wrong with our souls. When cynicism, despair, bitterness, or depression paralyze our energy, part of the soul is hurting. Second, a healthy soul has to keep us fixed together.”

Let’s face it, fog happens. But when it does, stay the course and listen to the foghorns around you. Keep hope and feed your soul. Eventually it will break and when it does, lift a pint of Guinness and the in the same way that Darren Clarke did.

Posted by Anne Stricherz at 1:58 PM