Why I Love the BYU Honor Code

As we bid farewell to Jimmer Ferdette, chin bandage and all, one could not help but wonder how BYU would have fared if Brandon Davies, the Wildcats’ 6'9" center had been in the line-up. Davies, the third-leading scorer for the Brigham Young men's basketball team, did not play the remainder of the season for violating the school's honor code. 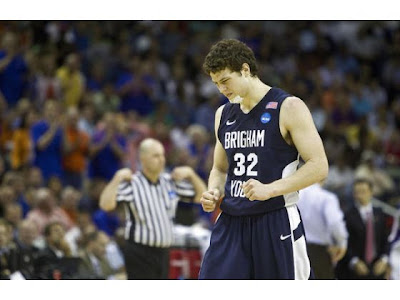 Davies had consensual sex with his girlfriend. In a sport where paternity suits abound (the May 4, 1998 Sports Illustrated feature story Paternity Ward reported how common out-of-wedlock children have become, especially among NBA players), in a country with lax views on sexual morality and in a world where sexual violence against women is far too common, his offense is slight; it's minor. This honor code seems antiquated and stifling, out of touch and out of date. And I love it.

I’ll admit it, I primarily love the BYU honor code for self-centered reasons. A school that holds its student body to be honest, live a chaste and virtuous life, obey the law and all campus policies, use clean language, respect others, abstain from alcoholic beverages, tobacco, tea, coffee and substance abuse, participate regularly in church services and observe a dress and grooming standard is setting the bar very high. My selfish side thinks, any standard we set won’t be as demanding. BYU’s honor code makes any other seem a lot more do-able!

Most people look at the honor code and raise one if not two eyebrows. Although I believe one can and should ask “is the bar set too high?” I also believe we need to consider how often we set the bar too low; I think there is danger in doing that. I’ve worked with young people long enough that they will, all too often, do the (very) least of what is required of them…and I’m not just talking about homework.

The BYU honor code on the other hand sets a high standard that is in line with its faith tradition. I do not claim to know all the nuances of why for example, Mormons oppose caffeine (but I can most likely guess) and I am uncertain how they might enforce a determined dress and grooming standard. But the very fact that they are so forthright in what they hold one another to and have such noble expectations is appealing to me. They do not apologize for their beliefs, or for who and what they are. All students know what they agree to honor. The choice is theirs. And I believe in making that choice, those students have a better sense of who and what they are called to be. 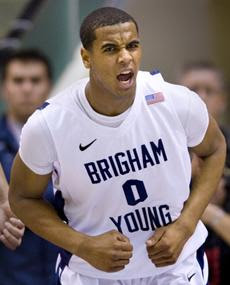 Davies made a choice that resulted in his suspension for the remainder of the season. Whether or not he will be allowed to play on the team next year is still to be determined, but I hope he will. His story is also an important reminder that one person’s decision, like so many others, has implications on others. Davies’ teammates had to find a way to succeed without their leading rebounder. And they did. They made it to the 2011 Sweet Sixteen and perhaps more importantly, he accompanied them to the Mountain West Tournament.

A friend always says “water seeks to rise to its own level.” Indeed it does. Set it high and most will rise....and when they don't, let's help them get there.

Story Credit: special thanks to my good friend Kevin Dowling for the lead on this story!
Photo Credits
Jimmer Fredette
BYU Seal
Brandon Davies
Posted by Anne Stricherz at 11:57 PM