In the Vibrant Action of Athletics, Death Hath No Victory 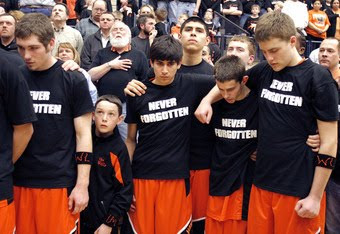 Not in the loneliness of sleep, but in the vibrant action of athletics; not in the midst of strangers but surrounded by family, friends, schoolmates and teammates; not in the performance of some meaningless act, but in the striving for a common cause…

These words, which adorn a memorial in the foyer between the old and new gyms—at St. Ignatius College Prep, are strikingly apropos as I reflect upon the short life of Wes Leonard, the 16-year-old basketball player from Fennville Michigan who died on March 3. I suppose they should be, for Dennis Carter died the same way on December 21, 1963 . 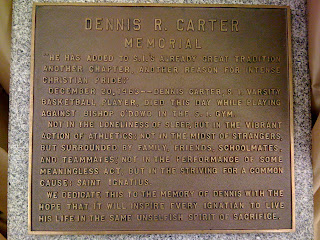 Carter, a senior starter for the Wildcats, collapsed during a preseason game against Bishop O’Dowd. Students in the stands were ushered out of the gym. SI teacher and alum, Mike Silverstri said “we gathered to pray the rosary. An ambulance led Dennis to St. Mary’s hospital. I don’t know when he was officially pronounced dead.”

In his memory, SI boys’ basketball honors one player with the Dennis Carter award. This athlete is not the most valuable or most improved player. It goes to he who is the most inspirational player and teammate. And in case the award itself doesn’t capture the spirit and significance of the life it honors, former SI principal, current teacher and alum, Charlie Dullea presents it at the team banquet. Charlie played on the same team as Dennis; he was with him when he died. 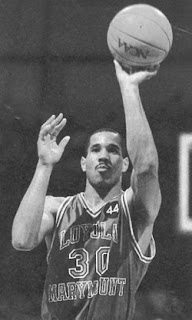 Memorializing a fallen teammate is absolutely necessary. It helps a team to recognize what has occurred, allows each athlete to honor the dead, and sets the grieving process in a necessary context. And the unique ways that we do is our gift to the dead--their memory, their legacy…their life. For example Loyola Marymount basketball star Bo Kimble, shot his first free throw in every game with his left hand to commemorate his teammate Hank Gathers. Kimble’s gesture was simple, but powerful. It invited in a story about his fallen friend. Gathers wasn’t even a lefty. He was such a low percentage shooter at the foul line, he decided to shoot with his left.

It’s interesting; Gathers & Leonard share a common fate. They both collapsed and died because of an enlarged heart. Perhaps it is all the more fitting that Kimble’s generosity and thoughtfulness wasn’t limited to his teammate; he flew to Michigan to attend Fennville’s next game.

I have always believed the Rite of Christian burial is more for those who live in the wake of death, than the one who has died. As we hear the readings, prayers and blessings we remember Jesus’ personal sacrifice and ultimately, that death hath no victory. 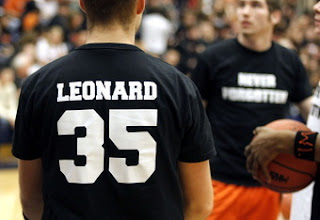 And nothing was more apparent than on the hardwood Monday night in the district quarterfinals as only four players on the Fennville high school varsity boys’ basketball team took the court. Their fifth starter, Wes Leonard died in the vibrant action of athletics. 3500 people took a moment of silence to remember his short life. His parents clapped in the stands as an emotional team hugged and cried after they defeated Lawrence high school. Both teams wore shirts that read “Never Forgotten.”

And that is not in the performance of some meaningless act, but rather their striving for a common cause is learning to live and love in a new way. St Therese of Lisieux said “I am not dying; I am entering life.” Only through death can we pass into the fullness of God’s kingdom. Some people are called much too soon. Let us pray for them, yes. But let them—Dennis,Wes, Hank et al pray for us.