An Important Question for Sports Fans: Why Do I Care? 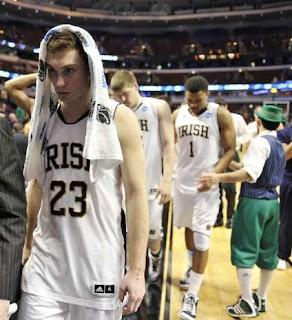 I have been walking around in a bit of a daze all day. A general malaise has colored my worldview. And why? Because the Notre Dame men’s basketball team—who just weeks ago were ranked as high as 4 in the country lost in the second round of the NCAA tournament. An exciting season that turned many heads came to a halt as we were defeated by Florida State. As I read the break down and analysis of the game followed by one Facebook comment after another, I kept asking myself an important question. I hope it’s one you have asked of yourself before. Why do I care?

Basketball isn’t a matter of life or death; this match up wasn’t good vs. evil. No lives were at stake, no conflict created, no wars or derision, just disappointment to the “n”th degree. Again, why do I care?

I care because I am passionate about Notre Dame. I love my alma mater in the same way that I love the Catholic Church and the United States. I know its underbelly, its foibles and follies. But I also know its mission, its tradition and purpose. I love its community that is a family, it commitment to excellence and how it formed my mind and my heart.

I care because without being overly trite or simplistic--this 2011 team was special. I found myself believing in them and eventually defending them to those who think our success is limited to (past tense) football. They are a passionate bunch. Spend just a few minutes watching them play and you will understand what I mean. Seeing is believing.

All too often we forget that the root of the word “passion” is pathos—which means "to suffer." My mood today reflects the truth in the semantics. For the vast majority of the regular season however, the Irish and their fans didn’t suffer too much. 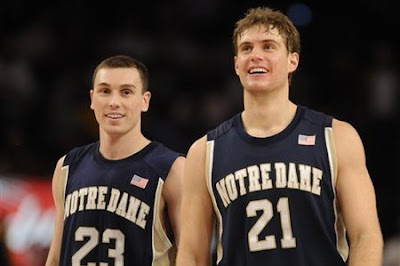 I delighted in the their first conference win over a #2 Pitt at the Petersen Events Center in Pittsburgh. I appreciated what they were able to do without a true big man this season. I must have shared New York Times article For Notre Dame's Hansbrough, Competitiveness Is a Family Trait with every person that inquired if Ben was related to Tyler. I loved his hustle, leadership and intensity. As an athlete, he is all that I am not. And Tim Abromaitis’ performance from behind the arc was majestic. I thanked him for continually following up on his rebounds. 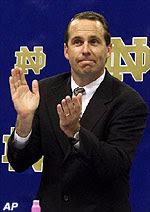 The decorations these men earned are well deserved. Ben Hansborough was named Big East Player of the Year and Tim Abromaitis earned the Scholar-athlete award for the second straight year. When Sports Illustrated recognized Mike Brey as the National coach of the year, I knew this team was legit.

I reached out to my former students who are now studying at Notre Dame. I wanted to know about the mood on campus. In what creative ways was the student body backing this team? How difficult is it to get tickets? Were there pep rallies? I didn’t want my M-TV; no I wanted the beat on campus.

I also wanted a Big East Title. I was hopeful for a good run in the NCAA. I admit it, visions of the Final Four in Houston danced in my head. My desire for this team and its glory—putting Notre Dame men’s basketball back on the map—was very strong. My passion for the Irish had its focus; my desire for victory was palpable. And once I realized that, I suddenly began to understand why I care.

As stated by Ron Rolheiser in The Holy Longing
Desire gives no exemptions. It does however admit of different moods and faces. Sometimes it hits us as pain - dissatisfaction, frustration, and aching. At other times its grip is not felt as painful at all, but as a deep energy, as something beautiful, as an inexorable pull, more important than anything else inside us, toward love, beauty, creativity, and a future beyond our limited present. Desire can show itself as aching pain or delicious hope.

The delicious hope was obvious. They don’t call the NCAA Basketball Tournament “the big dance” for naught. Some all called and few are chosen. The road to the final four is always full of surprises and all too soon, the Irish and their fans were confronted with aching pain. 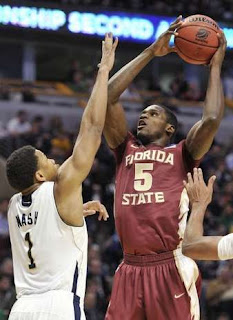 I am dissatisfied with how a good team played on Sunday night. I remain frustrated by our inability to get past the second round of the tournament. But more than those responses, what aches inside me today is that this particular group will not return to the hardwood again. Seniors will graduate, others will move on. A fine group of young athletes had their season. I am a fan, but I am also a witness.

What I saw, who I cheered for, why I care are because this team is precisely what we claim to be—the Fightin’ Irish.

Thank you to Mike Brey and the team for carrying my desire to Chicago. I hope you met a student body at the Main Circle today that despite the loss, greeted you with a whole lot of passion—aching pain aside. Delicious hope for 2012.