· On February 12, I walked into McCullough Gym at St. Ignatius to find larger than life sized posters of each senior in action. Six young men were honored.

· On February 19, I sat at Memorial Gym at the University of San Francisco as I watched hundreds of fans wearing “Moose” headgear to honor the one senior on the squad.

· And just last night, I watched with fellow Notre Dame alums as many of the seniors--honored in a pregame ceremony-- secured and defended the #8 ranking of the Fightin’ Irish. 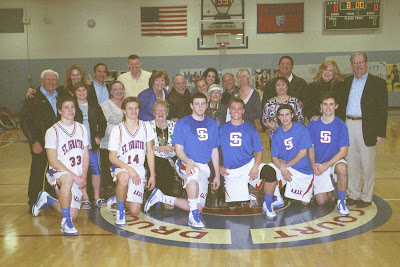 I love the tradition of concluding a school team's regular season with senior night. The purpose is self-explanatory. The student body and fans are able recognize athletes who have worn their school’s colors for the past four years, who have been leaders on and off the court, who have dedicated their time and talent to their sport. But what I love best isn’t the focus on the individual athlete. Senior night, paradoxically, highlights those who helped the young athlete get there—parents, siblings, even the fans. And in that sense, it’s deeply Christian.

God gave each of us our own unique set of talents and abilities. What we do with out gifts, how they are cultivated, strengthened and shared is up to us and those who support us, who raise us, who see something in us, who challenge us to work harder, dig deeper and learn from our mistakes. The Key Principles of Catholic Social Teaching states "In a culture driven by excessive individualism, our tradition proclaims that the person is not only sacred, but also social." The rituals of senior night, as I was recently privy to, make this evident.

At SI, before the official line-ups are called, each senior accompanies his family—nuclear and extended to half court. When the announcer introduced the WCAL league leader in points scored--Johnny Mrlik, he welcomed Johnny's parents and younger brother Matty, also known as “Shrew.” Upon hearing Matty’s nickname, the student body collectively yelled out “Shrew!” and the Wildcat Nation invited him to sit with them. Matty had been to nearly every one of his brother’s games. Yet Johnny says that Matty is the best athlete in their family. The SI community waits in anticipation for his future! 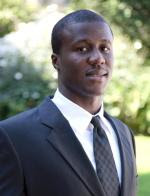 At USF, Moustapha "Moose" Diarra was the lone senior to be honored. Diarra is from Marseille, France; understandably, his family was not able to attend. At first glance, you would have seen the 6’10” senior center standing mid-court alone. But when his name was announced, Moose met a standing ovation from fans wearing green styrofoam moose headgear. A Christian community means we never stand alone. 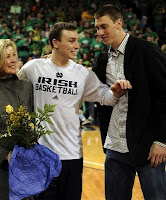 Back at my home away from home, seniors Tim Abromaitis and Ben Hansbrough came out of the gate running with 16 3-point shots in the first half. The television camera kept focusing on the Hansbrough family as perhaps it should have. Ben’s older brother Tyler was an outstanding college basketball player, who stayed at UNC all four years and now plays with the Indiana Pacers. A recent article by the New York Times revealed what we already knew: For Notre Dame’s Hansbrough, Competitiveness Is a Family Trait. That drive, cultivated in the Hansbrough home at an early age has met success. A victory for Ben is a victory for the Irish, for Ben’s two brothers, his parents and childhood friends.

I must confess, as much as I enjoy senior night, it is bittersweet. Every team has its own personality and character; each senior contributes in his or her own special way. To watch student athletes over the course of four years, you know how far they have come and what they have overcome. Their presence has an impact; they will be missed.

Perhaps I have overused the image at this point, but I find the LeBron James Nike advertisement “We are all witnesses” fitting. To witness senior night is a privilege but even more to see and meet the people who got them to that night is an honor and a gift. 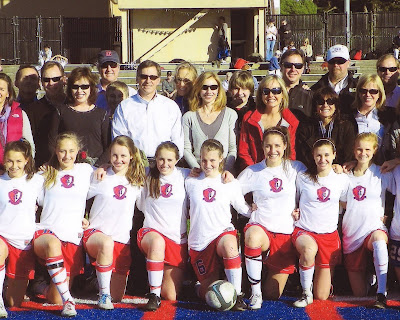